U.K. on-demand food delivery startup Deliveroo is pulling the plug on its service in Germany.

The startup expanded into the market more than four years ago. But in an email sent to users it writes that — “regrettably” — it will be exiting Germany on August 16.

“This was not an easy decision and one we have not taken lightly,” it adds, saying its focus will be on “growing our operations in other markets around the world.” 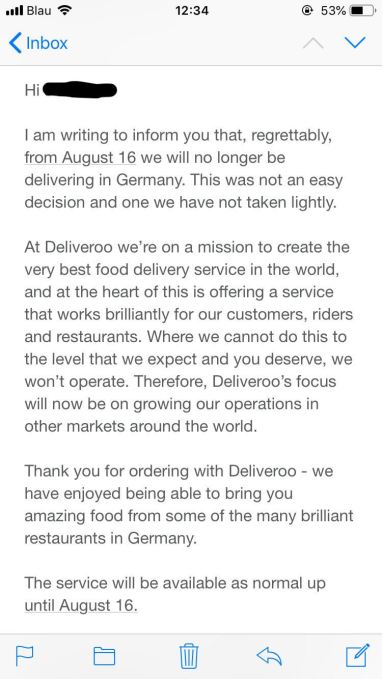 The company had already dialed back service in the market, shuttering services in a number of smaller German cities a year ago. At the time it said it would focus on Berlin, Munich, Cologne, Hamburg and Frankfurt.

A spokesperson for Deliveroo confirmed its complete exit from Germany, emailing TechCrunch the following statement:

We want to thank all of the riders and restaurants who worked with Deliveroo in Germany, as well our wonderful customers. It has been an honour to serve so many people amazing food from Germany’s many great restaurants and to work with so many brilliant, hard-working riders. We are grateful to our extremely talented employees for their commitment to bringing fantastic foods to people’s homes, and they will be supported in this period. Deliveroo will continue to grow and invest in markets across the world, seeking to become the world’s definitive food company.

The spokesperson added that Deliveroo intends to refocus resources and investment to accelerate growth and expansion in other markets across Europe and APAC — without specifying exactly where it plans to focus.

Support for riders and affected employees will include unknown levels of compensation and goodwill packages, according to information provided by Deliveroo. Update: The company has now provided more detail of the compensation, saying riders who have been active in the past 12 weeks will receive the following goodwill payments:

Any outstanding fees will also be paid to riders.

Deliveroo has also said it does not rule out returning to Germany, albeit it expressed a similar sentiment when it downsized its service footprint in the market last year.

At the time of its launch into Germany, back in April 2015, we wrote that Deliveroo would face “stiff competition,” noting for example that Berlin was already host to a range of local food delivery startups.

Competition in the on-demand food delivery space in Europe has raged fiercely for years — with very little to distinguish one delivery app from another, aside from price. Switching service is always just an app tap away. But with consolidation now starting to eat into the market the temperature is rising.

At the end of last year another Deliveroo rival, Delivery Hero, ceded its entire business in Germany to Netherlands-based Takeaway.com — selling the unit for €930 million.

And late last month, U.K.-based Just Eat and Takeaway.com announced they were in advanced talks to combine their businesses. Their boards reached agreement on terms last week — with the deal set to be put to their respective shareholders before the end of the year.

Most likely that mega-merger is concentrating minds at Deliveroo. Competing for customers with a platform giant valued at $10 billion+ certainly does not sound like a cake walk.