Eight years later, the Galaxy Note is undeniable. The original device, unveiled at IFA 2011, seemed unfathomably massive for a handset — all 5.3 inches of it. Nearly a decade and hundreds of millions of handsets later, the line has transformed the way we think about mobile devices.

Sure the stylus hasn’t become a mainstream element on handsets outside of Note devices, but much the rest of the industry has come around to Samsung’s way of thinking about big screens and productivity. Even foot-dragging Apple ultimately gave in. These days, the average screen size hovers about the 5.5-inch mark.

With the battle of screen sizes long since won, Samsung has an entirely different battle on its hands. With the smartphone market plateauing — and even receding — for the first time ever, companies have a difficult task on their hands. How can they make continually compelling offerings every six months? 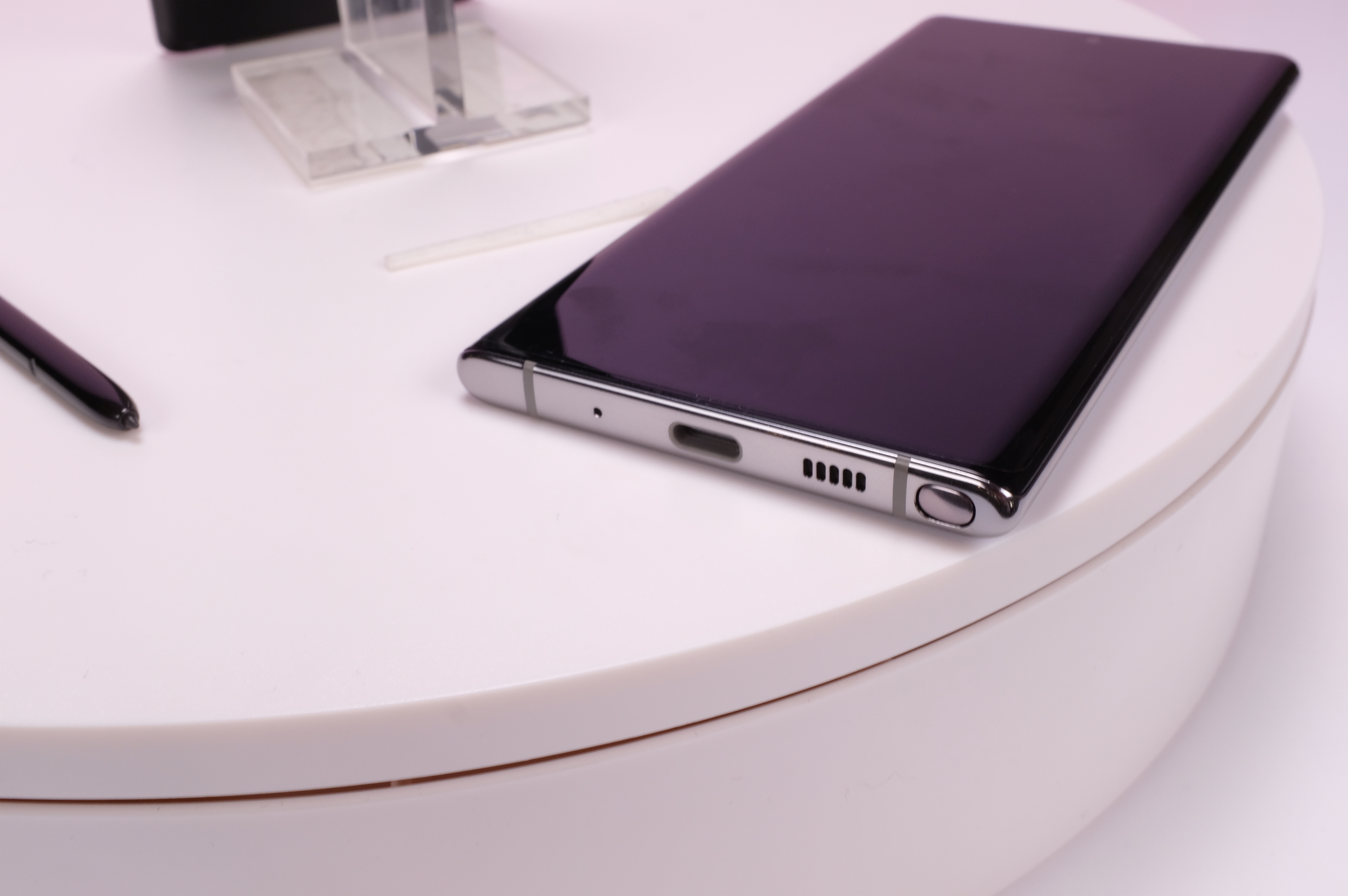 The truth is that companies have painted themselves into a corner. Smartphones have gotten so good that users don’t need to upgrade nearly as frequently. The good ones have also gotten extremely expensive, regularly starting north of $1,000. Between the S and Note series, Samsung has moved to a six-month release cycle, with the respective phones being used to funnel new features to both lines every half a year. In the process, the company has blurred the lines between the two, with the S Pen remaining the one true differentiator between devices.

With the introduction of the Note 10 and Note 10+, however, Samsung is attempting to broaden the appeal of its secondary flagship. Like the S line, the Note has been split into two distinct devices (well, three, when you factor in 5G — more on that later). The standard Note 10 marks a rare step down in screen size — though only slightly.

The base-level Note downgrades from 6.4 to 6.3 inches. Why? Samsung believes a move to a slightly smaller form factor makes the device that much more accessible. It’s a small concession, a literal fraction of an inch. But when you consider the fact that the newly introduced Note 10+ has roughly the same footprint as the Note 9, you begin to realize how much more compact the Note 10 is. 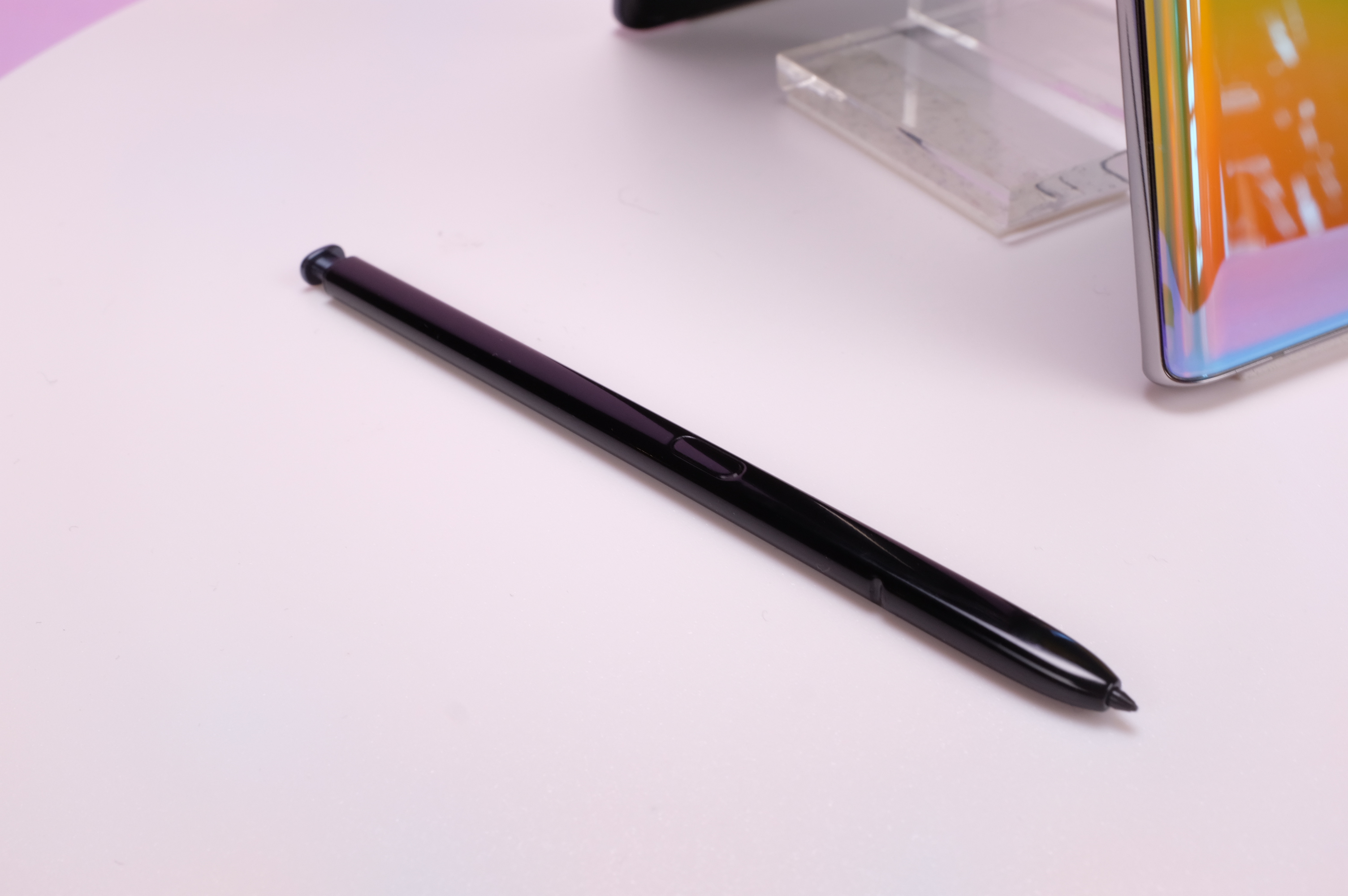 That’s one thing Samsung has progressively gotten better at, year in, year out. The screen to body ratio on the new Notes is impressive. I’ve read a fair amount of critical hindsight recently about how the first Note was received as being “too large.” The fact of the matter is that it was massive, even by today’s standard. Sure, 5.3-inch is nothing in terms of screen size in 2019, but back then that required a lot more phone.

You’ve likely seen plenty of renders of the device before now — and they’ve basically all proven to be true. It’s a nice-looking phone. Samsung’s leaned in further on the curves, leaving little to no bezel on the thing. The cutout camera on the S10+ has been ditched in favor of a single small hole punch floating in the center (Samsung tells me it’s ditched the dual-selfies in favor of improving the single one via software, machine learning and the like).

Also notably missing is the headphone jack. After years of mocking Apple and its ilk, the company’s inevitably eating a bit of crow on this one. The tipping point is two-fold. First, big batteries are back, at 3,500mAh on the 10 and 4,300mAh on the 10+. For reasons you know but we won’t get into here, Samsung put the larger battery on hold for a bit, in favor of additional safety precautions.

The other big factor is the Bluetooth tipping point. The company says a majority of flagship owners are now listening to music through a wireless connection (anecdotally around 70+%). Obviously that figure drops when dealing with less expensive handsets — people buying mid- and low-tier devices are still less inclined to shell out for Bluetooth headphones. Expect Samsung to blow through this bit of news pretty quickly at today’s event. 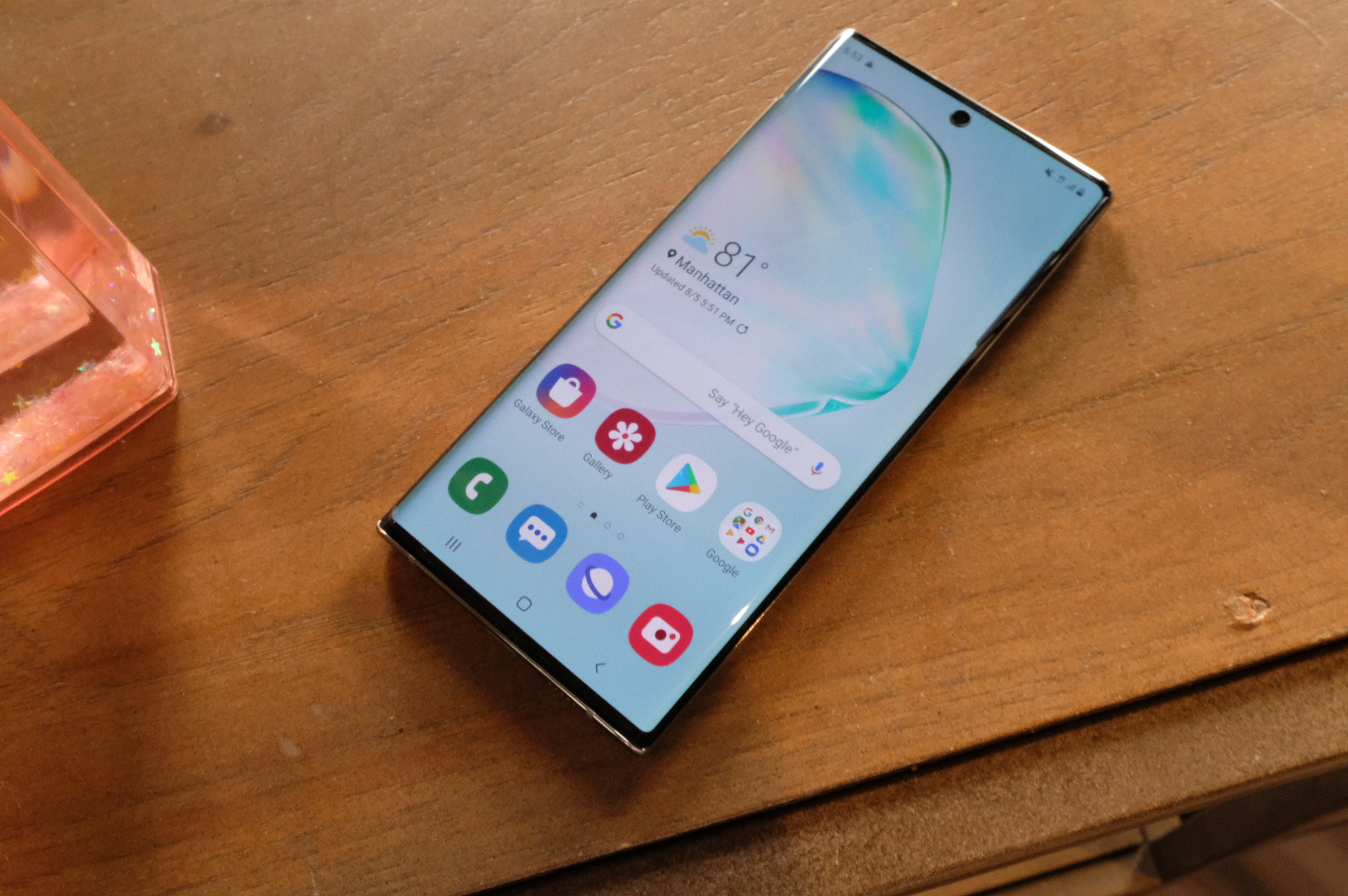 To help ease the shift, Samsung is including a pair of USB-C AKG headphones in the box. No dongle in-box, though. That’ll cost you.

Also gone is the standalone Bixby button. Instead, the power button summons Bixby with a long press. You can still remap that function, as well. Samsung is still pumping money into its smart assistant, but has generally acknowledged the lukewarm presence.

But enough of what we’re missing, right?

The back of the device (which sports some lovely new prism color schemes) sports a triple-camera area. There’s a 16 megapixel ultra wide, 12 megapixel standard wide angle and 12 megapixel telephoto. The 10+, meanwhile, brings a time of flight sensor, for added depth detection. It’s one of a small handful of distinctions between the models, including screen and battery size.

There are some nice software additions here, as well, including the ability to add a bokeh-style focus effect to video. Using the gyroscope and machine learning, the system dramatically reduces shake in photos.

The TOF sensor brings a 3D scanner feature to the camera, so users can scan an object and turn it into a moveable render. Honestly, that one still feels pretty niche. The company adds that there are some additional potential AR features there, though those will be in the hands of developers. 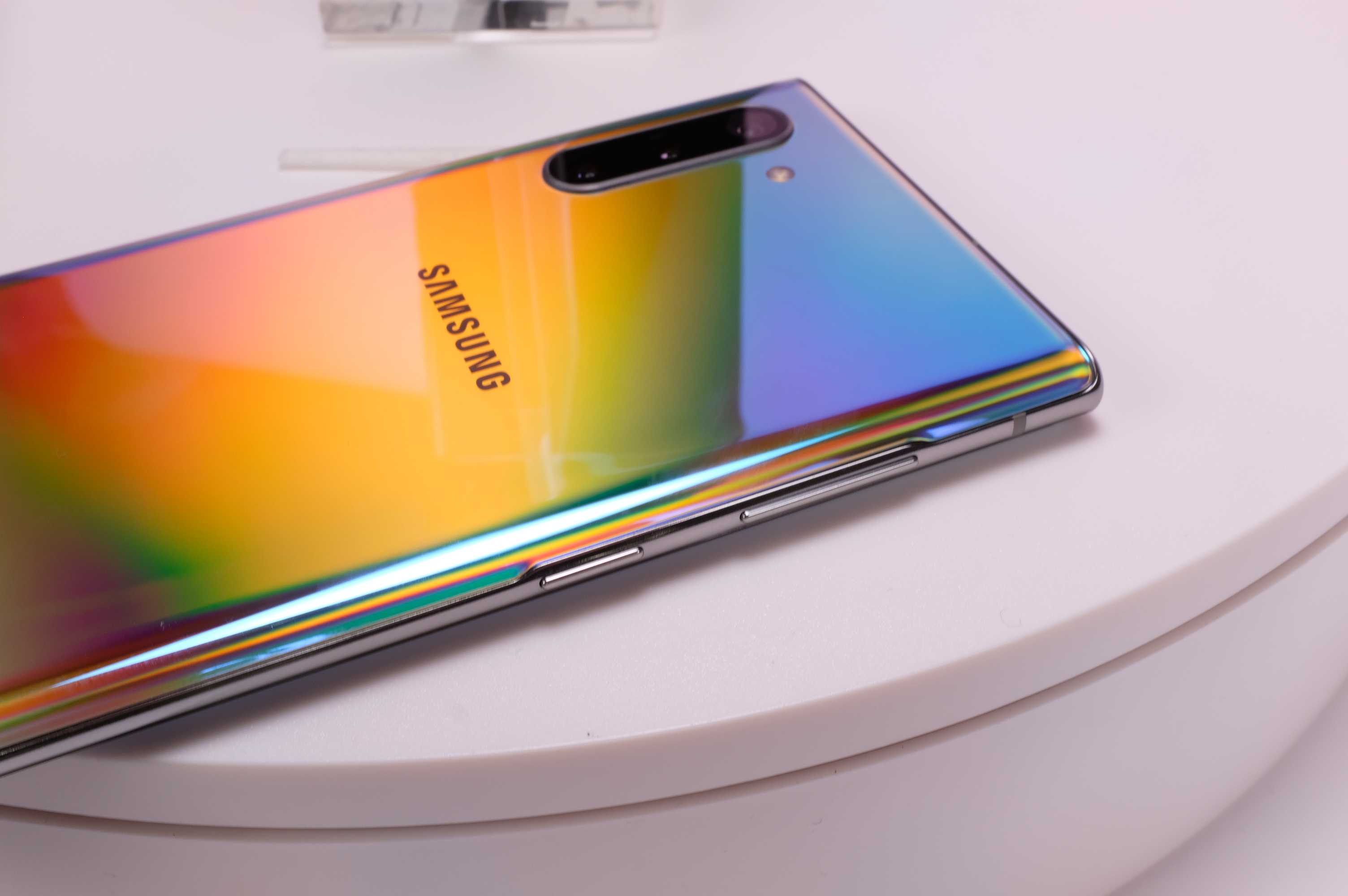 Zoom-In Mic is a cool addition to video, which uses the mic array to direct sound recordings to the spot where you’ve focused the camera. That will be a cool one to test out when we get more time with the phone in the near future. Night Mode, meanwhile, has been added to the 10 megapixel front-facing camera for all of those low-light selfies.

AR Doodle is one of the neater camera software add-ons, letting users scribble on spots in space with the S Pen or add images and masks to faces. Move the phone around the room and they maintain their position. Add that one to the fun-but-not-particularly-useful list of AR applications.

The S Pen itself has shifted to a more solid unibody design. Samsung has also added the ability to create custom gestures with the input device On the software front the main addition is better handwriting recognition. I tried it out and it did a pretty solid job with my horrible chicken scratch. 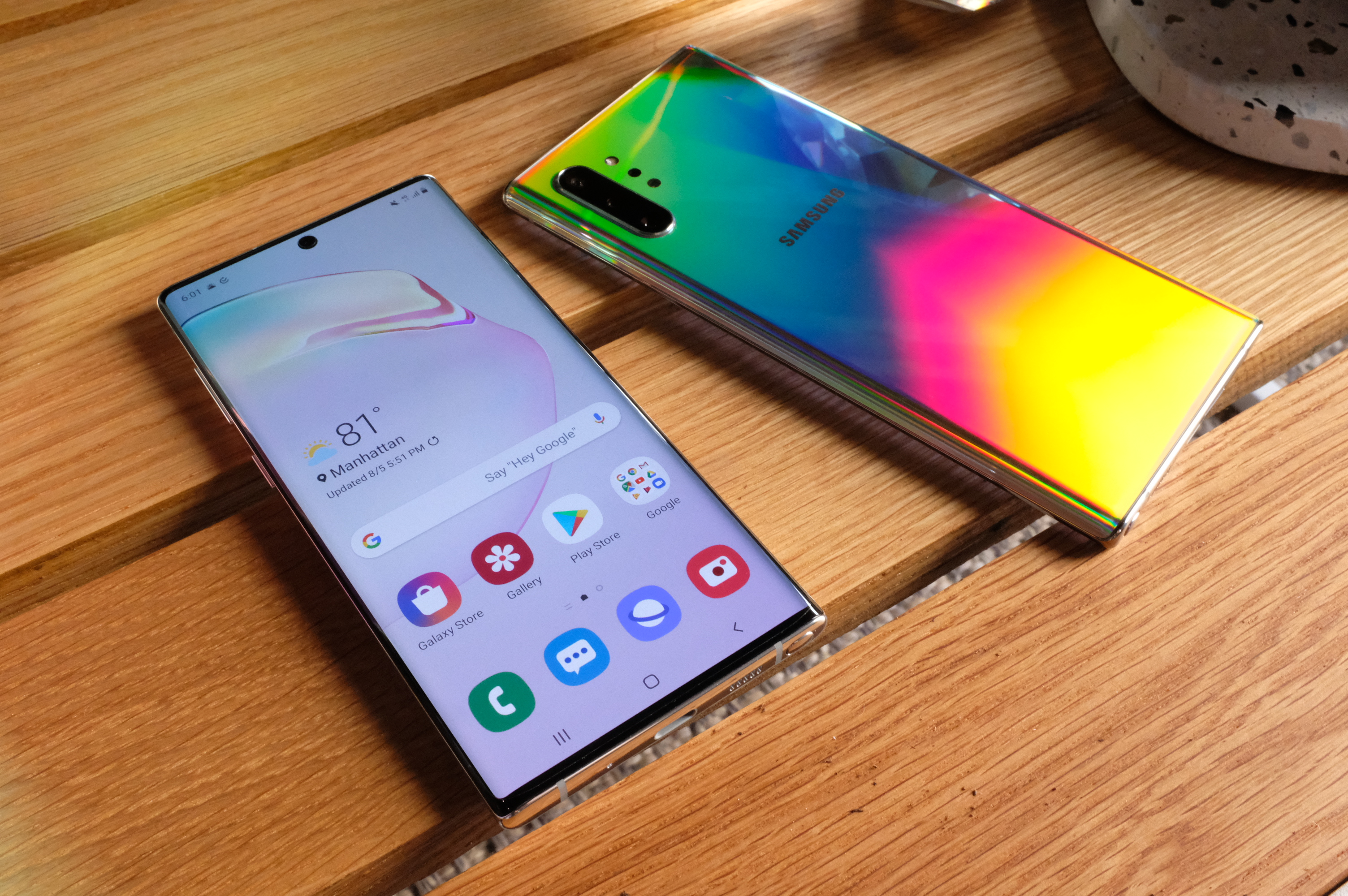 DeX continues to be a a key piece of the puzzle for Amazon. Here that includes new drag and drop capabilities between the Note and a connected Mac or PC. The company says the feature is much improved over past attempts at Android/desktop functionality. Honestly, the DeX branding is getting a bit cloudy at this point — that’s only made more murky by the addition of a non-DeX Link to Windows feature that brings notifications and messages straight to a connected Windows 10 PC.

That’s more of a minor branding quibble, though.

As usual, nothing too major to complain about here. The Note 10 feels like a pretty small upgrade in the grand scheme of things. The biggest news this time out is the addition of a second, XL size. 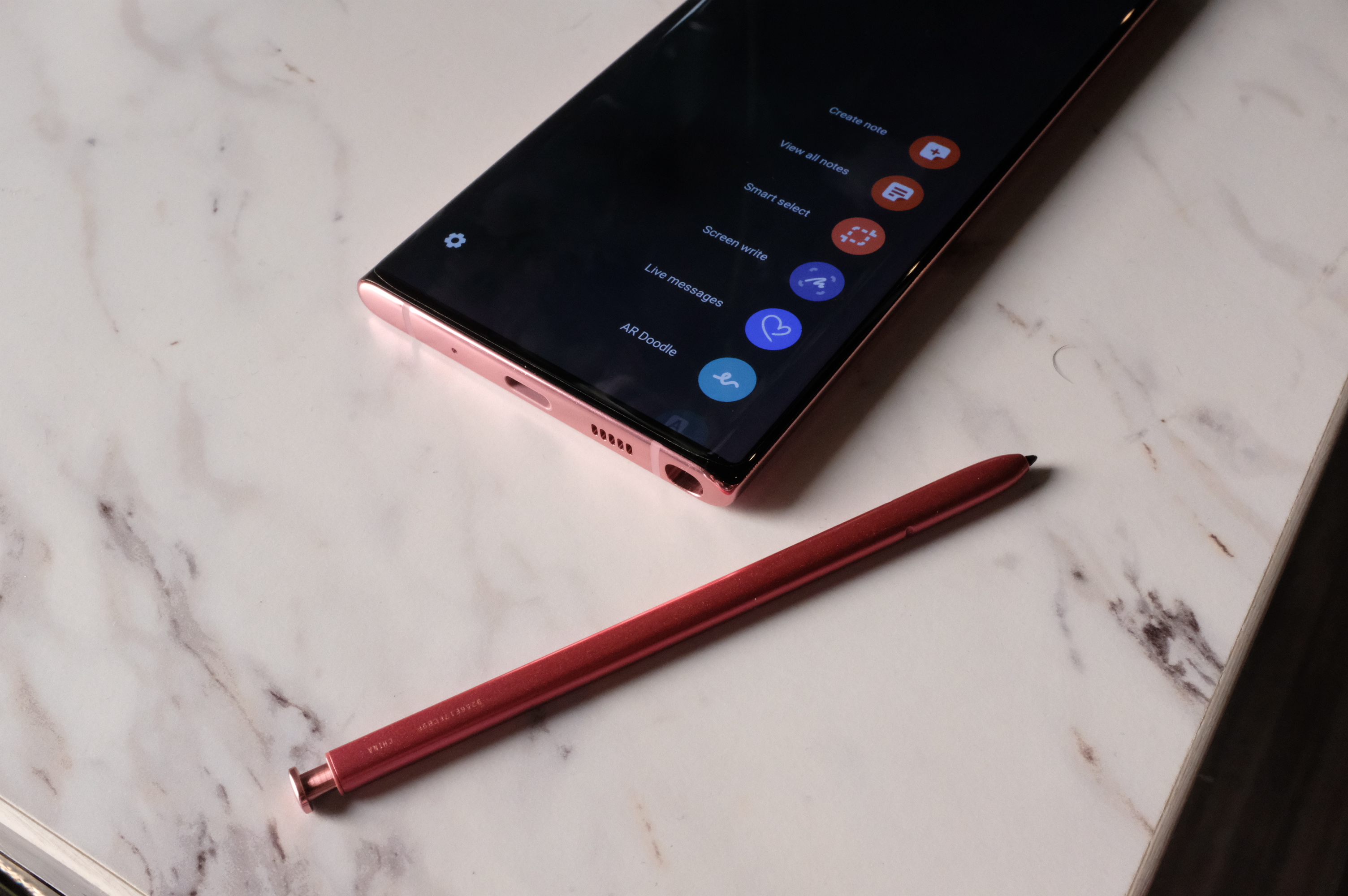 Pre-orders open tomorrow, August 8th for both. They’ll be in stores on the 23rd. The 10 starts at $950 and the 10+ starts at $1,100. Pre-order deals include accessories like the Charging Duo pad and Galaxy Watch Active.

There’s a 5G version of the Note 10+ available, as well, at the same time. That’s going to be a Verizon exclusive at launch, however, with pricing still TBD.