Facebook employees tried to alert the company about the activity of Cambridge Analytica as early as September 2015, per the SEC’s complaint against the company which was published yesterday.

This chimes with a court filing that emerged earlier this year — which also suggested Facebook knew of concerns about the controversial data company earlier than it had publicly said, including in repeat testimony to a U.K. parliamentary committee last year.

Facebook only finally kicked the controversial data firm off its ad platform in March 2018 when investigative journalists had blown the lid off the story.

In a section of the SEC complaint on “red flags” raised about the scandal-hit company Cambridge Analytica’s potential misuse of Facebook user data, the SEC complaint reveals that it already knew of concerns raised by staffers in its political advertising unit — who described CA as a “sketchy (to say the least) data modeling company that has penetrated our market deeply.” 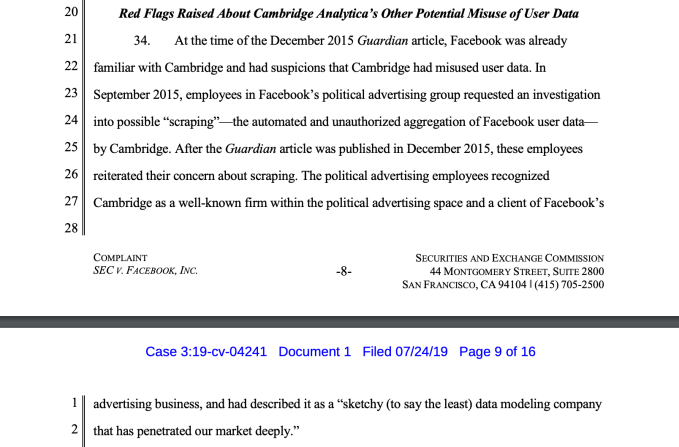 Amid a flurry of major headlines for the company yesterday, including a $5 billion FTC fine — all of which was selectively dumped on the same day media attention was focused on Mueller’s testimony before Congress — Facebook quietly disclosed it had also agreed to pay $100 million to the SEC to settle a complaint over failures to properly disclose data abuse risks to its investors.

This tidbit was slipped out toward the end of a lengthy blog post by Facebook general counsel Colin Stretch, which focused on responding to the FTC order with promises to turn over a new leaf on privacy.

CEO Mark Zuckerberg also made no mention of the SEC settlement in his own Facebook note about what he dubbed a “historic fine.”

As my TC colleague Devin Coldewey wrote yesterday, the FTC settlement amounts to a ‘“get out of jail” card for the company’s senior execs by granting them blanket immunity from known and unknown past data crimes.

“Historic fine” is therefore quite the spin to put on being rich enough and powerful enough to own the rule of law.

And by nesting its disclosure of the SEC settlement inside effusive privacy washing discussion of the FTC’s “historic” action, Facebook looks to be hoping to detract attention from some really awkward details in its narrative about the Cambridge Analytica scandal that highlight ongoing inconsistencies and contradictions, to put it politely.

The SEC complaint underlines that Facebook staff were aware of the dubious activity of Cambridge Analytica on its platform prior to the December 2015 Guardian story — which CEO Mark Zuckerberg has repeatedly claimed was when he personally became aware of the problem.

Asked about the details in the SEC document, a Facebook spokesman pointed us to comments it made earlier this year when court filings emerged that also suggested staff knew in September 2015. In this statement, from March, it says “employees heard speculation that Cambridge Analytica was scraping data, something that is unfortunately common for any internet service,” and further claims it was “not aware of the transfer of data from Kogan/GSR to Cambridge Analytica until December 2015,” adding: “When Facebook learned about Kogan’s breach of Facebook’s data use policies, we took action.”

Facebook staffers were also aware of concerns about Cambridge Analytica’s “sketchy” business when, around November 2015, Facebook employed psychology researcher Joseph Chancellor — aka the co-founder of app developer GSR — who, as Facebook has sought to paint it, is the “rogue” developer that breached its platform policies by selling Facebook user data to Cambridge Analytica.

This means Facebook employed a man who had breached its own platform policies by selling user data to a data company which Facebook’s own staff had urged, months prior, be investigated for policy-violating scraping of Facebook data, per the SEC complaint.

Fast-forward to March 2018 and press reports revealing the scale and intent of the Cambridge Analytica data heist blew up into a global data scandal for Facebook, wiping billions off its share price.

The really awkward question that Facebook has continued not to answer — and which every lawmaker, journalist and investor should therefore be putting to the company at every available opportunity — is why it employed GSR co-founder Chancellor in the first place?

Now reviewing Kogan's testimony where he testified to @SenJohnThune:
– Facebook visited Kogan in Sept 2015 and were told about his selling of data.
– His "equal partner" disclosed what they were doing during his job interview with Facebook (note: he was hired 11/9/15) pic.twitter.com/uAnxJgUQbl

Chancellor has never been made available by Facebook to the media for questions. He also quietly left Facebook last fall — we must assume with a generous exit package in exchange for his continued silence. (Assume because neither Facebook nor Chancellor have explained how he came to be hired.)

At the time of his departure, Facebook also made no comment on the reasons for Chancellor leaving — beyond confirming he had left.

Facebook has never given a straight answer on why it hired Chancellor. See, for example, its written response to a Senate Commerce Committee’s question — which is pure, textbook misdirection, responding with irrelevant details that do not explain how Facebook came to identify him for a role at the company in the first place (“Mr. Chancellor is a quantitative researcher on the User Experience Research team at Facebook, whose work focuses on aspects of virtual reality. We are investigating Mr. Chancellor’s prior work with Kogan through counsel”).

What was the outcome of Facebook’s internal investigation of Chancellor’s prior work? We don’t know because again Facebook isn’t saying anything.

More importantly, the company has continued to stonewall on why it hired someone intimately linked to a massive political data scandal that’s now just landed it a “historic fine.”

We asked Facebook to explain why it hired Chancellor — given what the SEC complaint shows it knew of Cambridge Analytica’s “sketchy” dealings — and got the same non-answer in response: “Mr Chancellor was a quantitative researcher on the User Experience Research team at Facebook, whose work focused on aspects of virtual reality. He is no longer employed by Facebook.”

We’ve asked Facebook to clarify why Chancellor was hired despite internal staff concerns linked to the company to which his company was set up to sell Facebook data; and how of all possible professionals it could hire Facebook identified Chancellor in the first place — and will update this post with any response. (A search for “quantitative researcher” on LinkedIn’s platform returns more than 177,000 results of professionals who are using the descriptor in their profiles.)

Earlier this month a U.K. parliamentary committee accused the company of contradicting itself in separate testimonies on both sides of the Atlantic over knowledge of improper data access by third-party apps.

The committee grilled multiple Facebook and Cambridge Analytica employees (and/or former employees) last year as part of a wide-ranging enquiry into online disinformation and the use of social media data for political campaigning — calling in its final report for Facebook to face privacy and antitrust probes.

A spokeswoman for the DCMS committee told us it will be writing to Facebook next week to ask for further clarification of testimonies given last year in light of the timeline contained in the SEC complaint.

Yet, as the SEC complaint underlines, Facebook staff had raised concerns months earlier. So, er, awkward.

There are more awkward details in the SEC complaint that Facebook seems keen to bury, too — including that as part of a signed settlement agreement, GSR’s other co-founder, Aleksandr Kogan, told it in June 2016 that he had, in addition to transferring modeled personality profile data on 30 million Facebook users to Cambridge Analytica, sold the latter “a substantial quantity of the underlying Facebook data” on the same set of individuals he’d profiled.

This U.S. Facebook user data included personal information such as names, locations, birthdays, gender and a sub-set of page likes.

Raw Facebook data being grabbed and sold does add some rather colorful shading around the standard Facebook line — i.e. that its business is nothing to do with selling user data. Colorful because while Facebook itself might not sell user data — it just rents access to your data and thereby sells your attention — the company has built a platform that others have repurposed as a marketplace for exactly that, and done so right under its nose…

The U.K.’s data watchdog previously identified three senior managers at Facebook who it said were involved in email exchanges prior to December 2015 regarding the GSR/Cambridge Analytica breach of Facebook users data, though it has not made public the names of the staff in question.

The SEC complaint suggests a far larger number of Facebook staffers knew of concerns about Cambridge Analytica earlier than the company narrative has implied up to now. Although the exact timeline of when all the staffers knew is not clear from the document — with the discussed period being September 2015 to April 2017.

Despite 30+ Facebook employees being aware of GSR’s policy violation and misuse of Facebook data — by April 2017 at the latest — the company leaders had put no reporting structures in place for them to be able to pass the information to regulators.

“Facebook had no specific policies or procedures in place to assess or analyze this information for the purposes of making accurate disclosures in Facebook’s periodic filings,” the SEC notes.

The complaint goes on to document various additional “red flags” it says were raised to Facebook throughout 2016 suggesting Cambridge Analytica was misusing user data — including various press reports on the company’s use of personality profiles to target ads; and staff in Facebook’s own political ads unit being aware that the company was naming Facebook and Instagram ad audiences by personality trait to certain clients, including advocacy groups, a commercial enterprise and a political action committee.

“Despite Facebook’s suspicions about Cambridge and the red flags raised after The Guardian article, Facebook did not consider how this information should have informed the risk disclosures in its periodic filings about the possible misuse of user data,” the SEC adds.