Microsoft reported in its FY19, Q4 earnings report today that Azure, the company’s infrastructure as a service (IaaS) offering, grew at 64%. It may feel like a large number, but was part of a downward trend Microsoft has been experiencing throughout the entire fiscal 2019 earnings cycle.

The growth rates for FY19 were, Q1: 76%, Q2: 76%, Q3: 73% and all the way down to 64% this quarter. They’re probably not panicking in the hallways in Redmond today over these numbers, as that is still a healthy growth rate, and the law of large numbers suggests that the bigger you get, the slower your growth is going to be. Gaudy numbers tend to be for upstarts.

Microsoft is clearly not in that category, sitting strongly in the No. 2 position in cloud infrastructure market, and as Synergy Research’s John Dinsdale pointed out, while that growth rate may be slowing down, the more important market share percentage has continued to grow steadily upward.

“Microsoft is a clear number two in cloud infrastructure services (IaaS, PaaS, hosted private cloud), still a long way behind AWS but well ahead of the rest of the pack. Its revenue growth rate is way above the overall market growth rate, so it is gradually gaining marketshare – 9% in 2016, 11% in 2017, 14% in 2018 and 16% in the first quarter of 2019,” he said in a statement today. 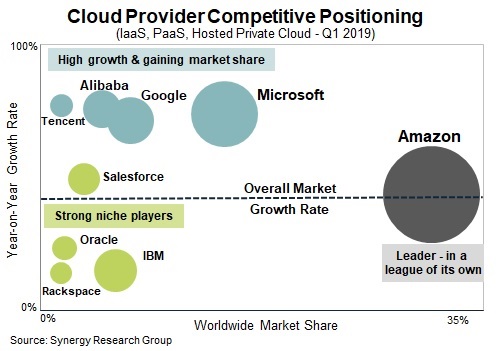 And even as the revenue growth slows, Microsoft announced a big win this week when AT&T announced it would be signing a contract worth $2 billion in Azure and Office 365 services. While Office 365 is not part of the IaaS market, it was still a significant customer acquisition for the company.

The cloud market is still growing at a rapid rate as companies are still in the relatively early stages of moving their workloads to public cloud vendors like Microsoft, Amazon and Google. There is a tremendous opportunity ahead for Microsoft and all of its rivals, and while Microsoft’s Azure earnings growth may be slowing down, there is still plenty of room for significant revenue for the foreseeable future.