Within the sphere of diversity, inclusion and equity, it’s common knowledge that companies are unlikely to achieve meaningful progress unless they put goals in place. Uber has finally gotten the memo. Today, as part of its third diversity report, Uber committed to two three-year goals, as well as broke out the stats around intersectionality.

Uber is still predominantly white and Asian, but the company has made notable headway in the representation of black and Latinx people among its employees. Uber is now 9.3% black and 8.3% Latinx compared to just 8.1% black and 6.1% Latinx last year.

While these numbers are an improvement, they are not where they need to be. Project Include’s Ellen Pao has previously said the numbers need to be at 13% black and 17% Latinx in order to reflect the demographics of the U.S. population.

“I think one area where we are improving but continue to need to improve is to increase the percentage of people of color at Uber,” Uber CEO Dara Khosrowshahi told TechCrunch. “In general, both black and Latinx employees. But not only increasing representation but also really understanding the experience of a POC at Uber — their engagement and their satisfaction.”

Another caveat is that when it comes to the representation of black and brown people in tech roles, also known as the higher-paying roles, the percentages decrease. Uber’s tech team is just 3.6% black, 4.4% Latinx and 2.7% multi-racial.

These roles are generally lower-paying ones, but Uber Chief Diversity Officer Bo Young Lee stressed that there has been positive growth across all the levels. Also, in order to further facilitate the growth of underrepresented people in the higher levels, Uber needs to make investments in the levels below.

“In order to make that change happen, we have to get people through the pipeline at levels below,” Lee told TechCrunch.

But it’s not easy, nor should it be, to advance in the ranks at Uber, Khosrowshahi said.

Unsurprisingly, there’s also little representation of black and brown people in leadership roles. While Khosrowshahi said he’s proud the promotion rates for women have improved over the last couple of years, he said, “I can’t yet say the same for promotions for people of color.” 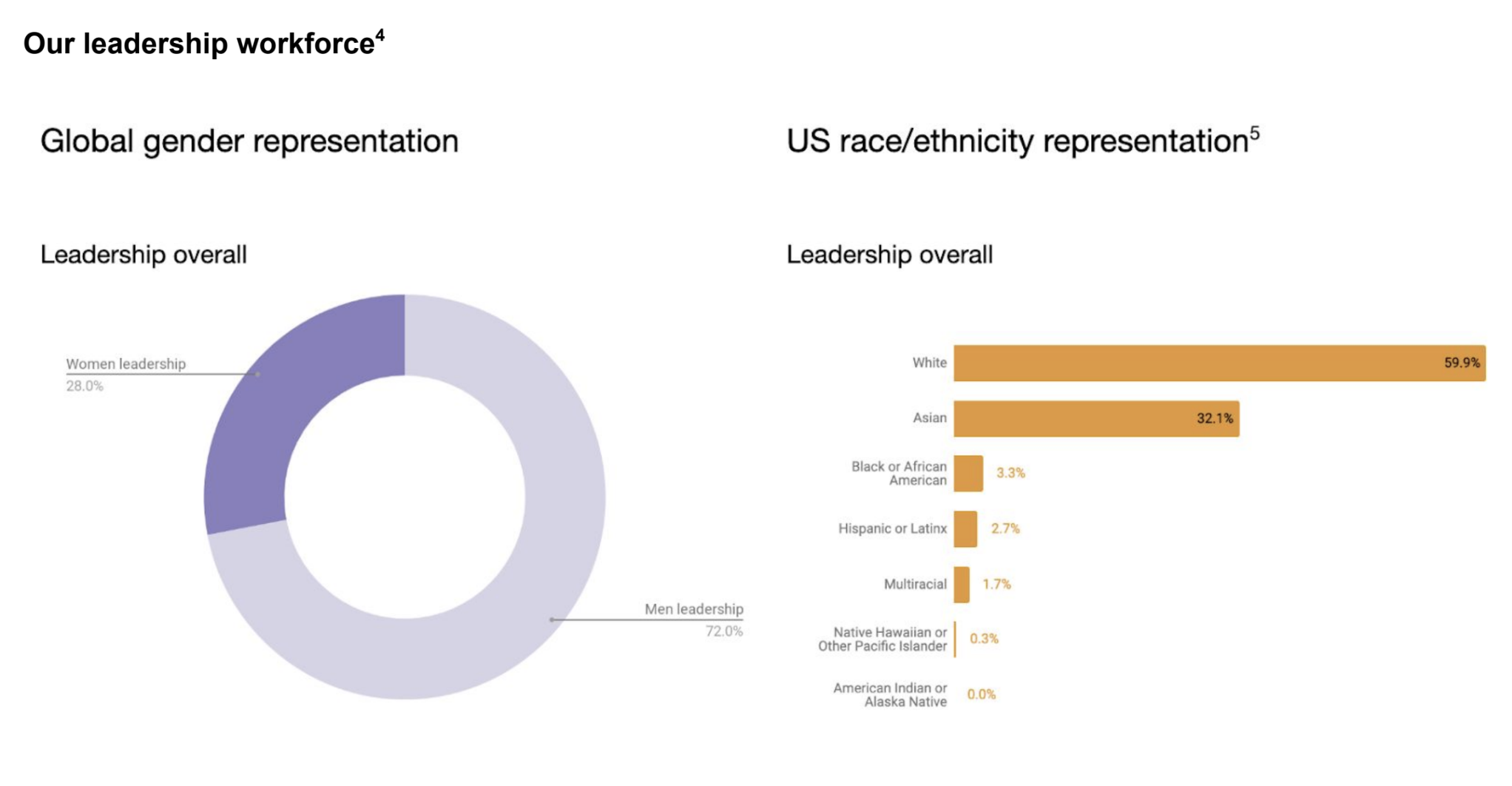 He added that representation of black and brown people at Uber in both tech and leadership positions “has to get better and it is getting better but we are early in this process.”

Uber is also in the early days of looking at intersectionality, having just started looking at the data in the last six months or so.

“I’m a strong believer that in order for true inclusion to be created, you have to look at how people in the organization who have the most intersectional identities are thriving,” Lee said. “Most of the gains, historically, when women have thrived, are gained by white women. Black and brown women often gain the least.”

Here are some things I found notable:

It’s problematic that there are more white men than there are black and Latinx people at Uber. However, given what we all know about the tech industry, it’s not necessarily surprising.

“I certainly wasn’t pleased by it,” Lee said about the statistics. “But I wouldn’t say I was disappointed because I wasn’t surprised. It just gave me a really good starting place around what we were actually facing.”

Meanwhile, Uber, along with its rival, Lyft, has been the target of driver protests as of late. Ahead of its IPO, drivers demanded better wages, benefits, transparent policies and a voice. While Uber does not disclose the diversity of its drivers, it’s commonly understood that these are people of color.

Within the next three years, Uber aims to:

Last week, Facebook laid out some new goals. The most notable one is to double the number of female and POC employees within the next five years. While Uber does not have that same goal in place, Uber expects to see the representation of women and POC double within the next few years on a year-over-year growth basis, Lee said. It’s important, however, to note that is different than on the basis of percentage point improvements.

While Uber has put some goals in place, Lee said it’s too early for the company to set goals around intersectionality. The first step seems to be to help people within Uber understand what intersectionality means and see how it shows up, or doesn’t show up, within its workforce.

“It doesn’t help us to hide this data,” Lee said of the company’s intersectional data. “If you don’t face the reality, you can’t make progress…While I’m not necessarily happy about the results or data as it stands, it is progress as long as we face it without excusing it.”