Starbucks’ mobile ordering app has proven wildly popular for the company, with reports indicating that it had more users than the likes of Apple Pay or Google Pay last year. The convenience is just too alluring. When you’re late for work and forgot to eat, being able to order up a drink and a sandwich with a tap or two and have it ready for pick up by the time you pass the store seems sort of like magic.

But how can smaller coffee shops compete? Building and maintaining an app of your own is a massive endeavor — and that’s before you start trying to convince customers to install yet another app.

Cloosiv is aiming to take that simplified, tap-of-a-button mobile ordering approach and make it work for local coffee shops by bringing them all to one place. It highlights the nearby coffee shops that are part of the service, presents their menus and lets you tweak your drink to your liking before sending your order on its way. Tipping is handled through the app, and there’s a built-in rewards system to encourage people to keep coming back.

Cloosiv’s network of coffee shops isn’t huge yet; it’s up and running at just a couple of locations in San Francisco right now, and a quick glance at the in-app location map pins the nationwide total at a little shy of 200. The more that number grows, though, the more the concept makes sense. It becomes an everyone-versus-the-giant sort of thing. 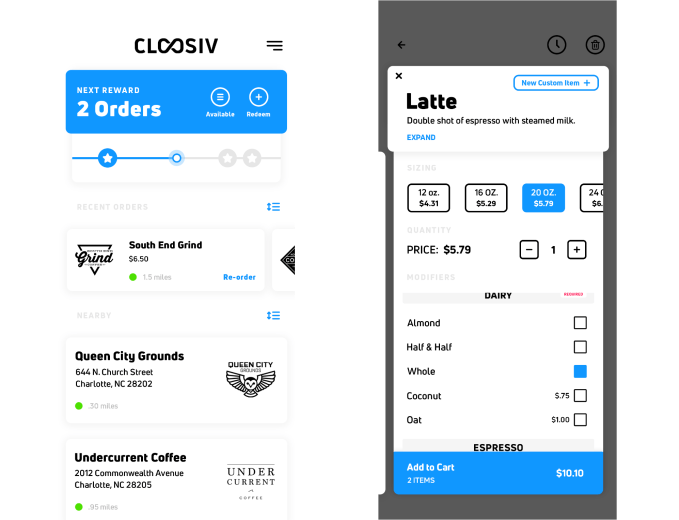 As with Starbucks’ mobile ordering app, Cloosiv encourages users to pre-load money into a built-in wallet — the idea being that pre-loading means fewer credit card charges, which cuts back on processing fees for everyone. Unlike the big competition, however, users can make a one-off purchase without pre-loading the funds. There’s a 40 cent fee tacked onto those charges to cover processing, but the option is there.

I gave the app a spin in San Francisco last week, and it worked exactly as promised. I found a coffee shop (Coffee Mission) near BART, punched in my order as the train approached, and my drink was waiting for me by the time I made it out of the station. 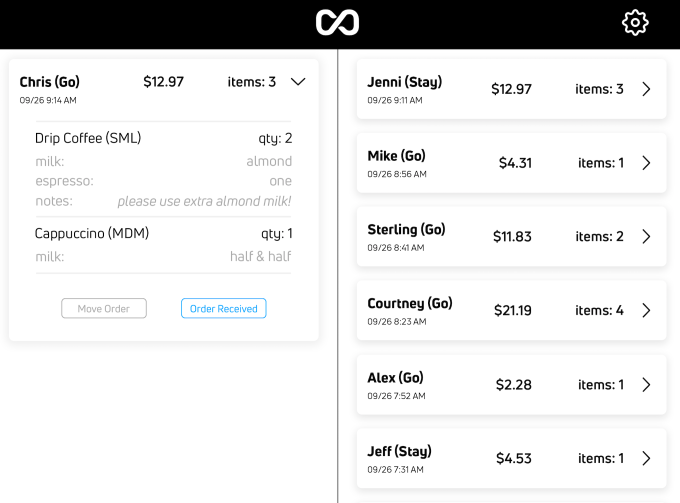 As many (most?) coffee shops already have a tablet on the counter acting as the point of sales terminal, Cloosiv is focusing on integrating into what’s already in place. When an order comes in today, a sound plays as a notification banner drops down from the top of the screen; when an employee taps the banner, they’re bumped over to Cloosiv’s Merchant app where they can acknowledge orders or mark them as complete.

The next step for the company is tying all of this directly into the merchant apps that coffee shops are already using — they’re focusing on Square first, with plans to tie into things like Clover and Micros.

Cloosiv charges vendors a percentage of each sale, with that percentage going down as the number of orders goes up. The first 50 orders each month, for example, are charged a 12% fee; after 150 orders, that fee drops to 8%.

Cloosiv founder Tim Griffin tells me they’ve processed more than 35,000 orders so far, making up over $250,000 in revenue for the coffee shops they work with. He estimates that orders and gross volume are both growing by about 40% monthly. The company recently closed a small round with investors, including Lachy Groom (previously head of Issuing at Stripe) and Laura Behrens Wu (CEO of Shippo), and is part of Y Combinator’s Summer 2019 class.