New advances in genetic mapping and manipulation hold the promise of reshaping medical treatments in the 21st century, but thanks to a lack of sufficient infrastructure and apparent scientific disregard, an entire continent is at risk of being left out.

Only 2% of genetic material used for pharmaceutical research comes from the African continent, while genetic data on Caucasians makes up 90% of the data and samples available. This is despite the fact that Africans and people of African ancestry are more genetically diverse than all of the other populations in the world combined.

At the beginning of the last century, the American sociologist and scholar W. E. B. Du Bois wrote, “the problem of the Twentieth Century is the problem of the color-line,” and as the twenty-first century dawns, Abasi Ene-Obong, the founder of 54gene, is trying to make sure that the color line doesn’t circumscribe the ability of Africa to participate in science’s next great era of discovery.

Named for the 54 countries that make up the African continent, Ene-Obong has set himself no less ambitious a goal than building the first and largest biobank of African DNA for the entire continent.

Born in Calabar, Nigeria (the first capital of Nigeria and a port for the nation’s slave trade in its colonial past) to parents who were both researchers and academics, Ene-Obong is uniquely qualified for the job. He has a doctorate in cancer biology from the University of London, a master’s degree in business administration from Claremont College in California and a master’s degree in human molecular genetics from the Imperial College of London.

Ene-Obong says he became fascinated with genetics from the first moment he took a class in the subject in university. 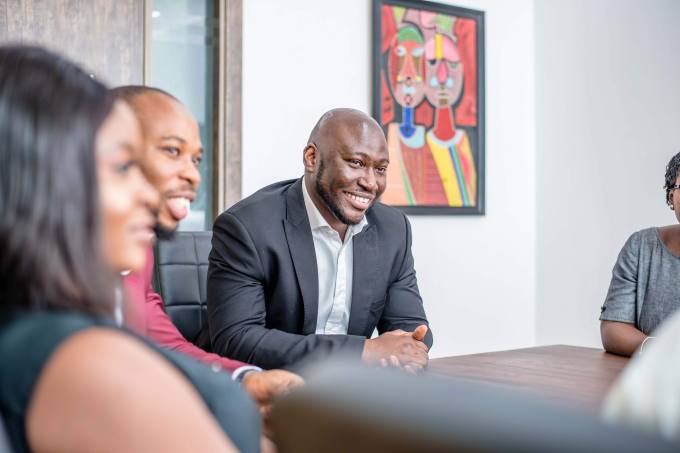 “I always wanted to do stuff that brought the African continent into the global healthcare debate,” says Ene-Obong, and 54gene is the fulfillment of that ambition. “Going into consulting I knew that I wanted to leave at some point to start the company,” says Ene-Obong. “I just wasn’t sure what company I’ll be starting… I went back to Nigeria blind because I wasn’t sure what to do and I wanted to see what the opportunity was.”

There’s precedent for Ene-Obong’s belief that African genetic data may hold the key to unlock untold medical discoveries. The osteoporosis drug Romosozumab was discovered by investigating a genetic mutation in South African Afrikaner patients, and Alirocumab, a cholesterol drug, was discovered by researchers at the University of Texas at Austin, who identified a genetic mutation in an African population, says Ene-Obong.

The thesis behind Ene-Obong’s company was enough to attract the attention of Y Combinator, where the business model for 54gene was refined, and bring in $4.5 million in seed from Y Combinator, Fifty Years, Better Ventures, KdT Ventures, Hack VC and Techammer — among others.

The company is currently collecting data from 10 of the largest research and public hospitals in Nigeria and expects to hold 40,000 samples of participants in its biobank. The current focus is on sampling the genetic material of cancer patients, patients with cardiovascular diseases and metabolic diseases like diabetes and sickle cell anemia.

The company has been vetted by the institutional review boards at each of the hospitals where it is collecting genetic material and receives an informed consent from all of the patients who choose to give their DNA to the project, Ene-Obong said.

The company intends to start bringing in revenue through paid partnerships with pharmaceutical companies and will be leveraging its San Francisco and Lagos locations to ensure that it can continue to collect material and develop the partnerships it needs to grow.

Helping with that process are two new hires, Jessica Rich, who joined the company as chief commercial officer after spending seven years at Illumina; and Delali Attipoe, a 13-year veteran of Genentech who most recently served as head of market access in East Africa for Roche before joining the 54gene team as chief operating officer.

“The genomics capabilities in Africa are really non-existent,” Ene-Obong said. “That’s one reason you’re not getting genetic data out. We want to change that.”