In its most recent report, Synergy Research, a company that monitors cloud marketshare, found that enterprise SaaS revenue passed the $100 billion run rate this quarter. The market was led by Microsoft and Salesforce.

It shouldn’t be a surprise at this point that these two enterprise powerhouses come in at the top. Microsoft reported $10.1 billion in Productivity and Business Processes revenue, which includes Office 365, the Dynamics line and LinkedIn, the company it bought in 2016 for $26.2 billion. That $10.1 billion accounted for the top spot with 17 percent

Salesforce was next with around 12%. It announced $3.74 billion in revenue in its most recent earnings statement with Service Cloud alone accounting for $1.02 billion in revenue, crossing that billion-dollar mark for the first time.

Adobe came in third, good for around 10% market share, with $2.74 billion in revenue for its most recent report. Digital Media, which includes Creative Cloud and Document Cloud, accounted for the vast majority of the revenue with $1.8 billion. SAP and Oracle complete the top companies 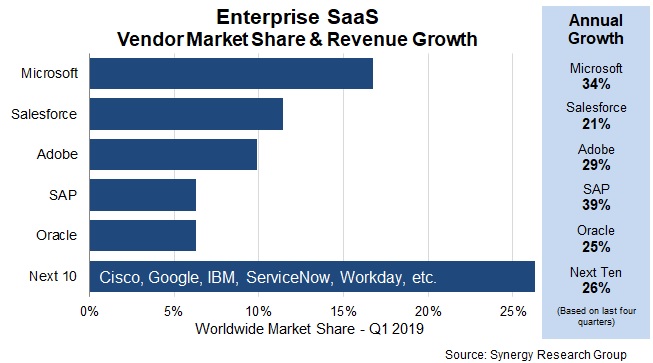 While that number may seem low, given we are 20 years into the development of the SaaS market, it is still a significant milestone, not to be dismissed lightly. As Synergy pointed out, while the market feels mature, if finds that SaaS revenue still accounts for just 20 percent of the overall enterprise software market. There’s still a long way to go, showing as with the infrastructure side of the market, things change much more slowly than we imagine, and the market is growing rapidly, as the impressive growth rates show.

“While SaaS growth rate isn’t as high as IaaS (Infrastructure as a Service) and PaaS (Platform as a Service), the SaaS market is substantially bigger and it will remain so until 2023. Synergy forecasts strong growth across all SaaS segments and all geographic regions,” the company wrote in its report.

Salesforce is the only one of the top five that was actually born in the cloud. Adobe, an early desktop software company, switched to cloud in 2013. Microsoft, of course, has been a desktop stalwart for many years before embracing the cloud over the last decade. SAP and Oracle are traditional enterprise software companies, born long before the cloud was even a concept, that began transitioning when the market began shifting.

Getting to a billion

Yet in spite of being late to the game, these numbers show that the market is still dominated by the old guard enterprise software companies and how difficult it is to achieve market dominance for companies born in the cloud. Salesforce emerged 20 years ago as an early cloud adherent, but of all of the enterprise SaaS companies that were started this century only ServiceNow and WorkDay show up in the Synergy list lumped in “the next 10.”

That’s not to say there aren’t SaaS companies making some serious money, just not quite as much as the top players to this point. Jason Lemkin, CEO and founder at SaaStr, a company that invests in and supports enterprise SaaS companies, says a lot of companies are close to that $1 billion goal than you might think, and he’s optimistic that we are going to see more.

“We will have at least 100 companies top $1 billion in ARR, probably many more. It is just math. Almost everyone IPO’ing [SaaS company] has 120-140% revenue retention. That will compound $100 million or $200 million to $1 billion. The only question is when,” he told TechCrunch. 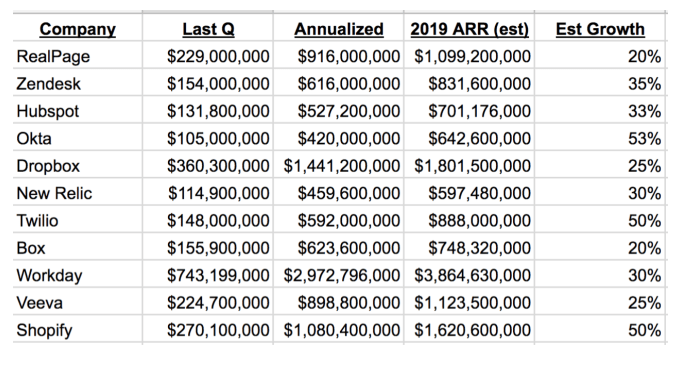 He adds that annualized numbers are very close behind ARR numbers and it won’t take long to catch up. Yet as we have seen with some of the companies on this list, it’s still not easy to get there.

It’s hard to develop a billion dollar SaaS company, and it takes time and patience, and perhaps some strategic acquisitions to get there, but the market trajectory continues to move upward. It will likely only grow stronger as more companies move to software in the cloud, and that bodes well for many of the players in this market, even those that didn’t show up on Synergy’s chart.