With the rollout of Apple’s public beta software previews of macOS and the new iPadOS, I’ve finally been able to experience first-hand Sidecar, the feature that lets you use an iPad as an external display for your Mac. This is something I’ve been looking to make work since the day the iPad was released, and it’s finally here – and just about everything you could ask for.

These are beta software products, and I’ve definitely encountered a few bugs including my main Mac display blanking out and requiring a restart (that’s totally fine – betas by definition aren’t fully baked). But Sidecar is already a game-changer, and one that I will probably have a hard time living without in future – especially on the road.

Falling nicely into the ‘it just works’ Apple ethos, setting up Sidecar is incredibly simple. As long as your Mac is running macOS 10.15 Catalina, and your iPad is nearby, with Bluetooth and Wifi enabled, and running the iPadOS 13 beta, you just click on the AirPlay icon in your Mac’s Menu bar and it should show up as a display option.

Once you select your iPad, Sidecar just quickly displays an extended desktop from your Mac on the iOS device. It’s treated as a true external display in macOS System Preferences, so you can arrange it with other displays, mirror your Mac and more. The one thing you can’t do that you can do with traditional displays is change the resolution – Apple keeps things default here at 1366 x 1024, but it’s your iPad’s extremely useful native resolution (2732 x 2048, plus Retina pixel doubling for the first-generation 12.9-inch iPad Pro I’m using for testing), and it means there’s nothing weird going on with pixelated graphics or funky text.

Apple also turns on, by default, both a virtual Touchbar and a new feature called ‘Sidebar’ (yes, it’s a Sidebar for your Sidecar) that provides a number of useful commands including the ability to call up the dock, summon a virtual keyboard, quickly access the command key and more. This is particularly useful if you’re using the iPad on its own without the attached Mac, which can really come in handy when you’re deep in a drawing application and just looking to do quick things like undo, and Apple has a dedicated button in Sidebar for that, too. 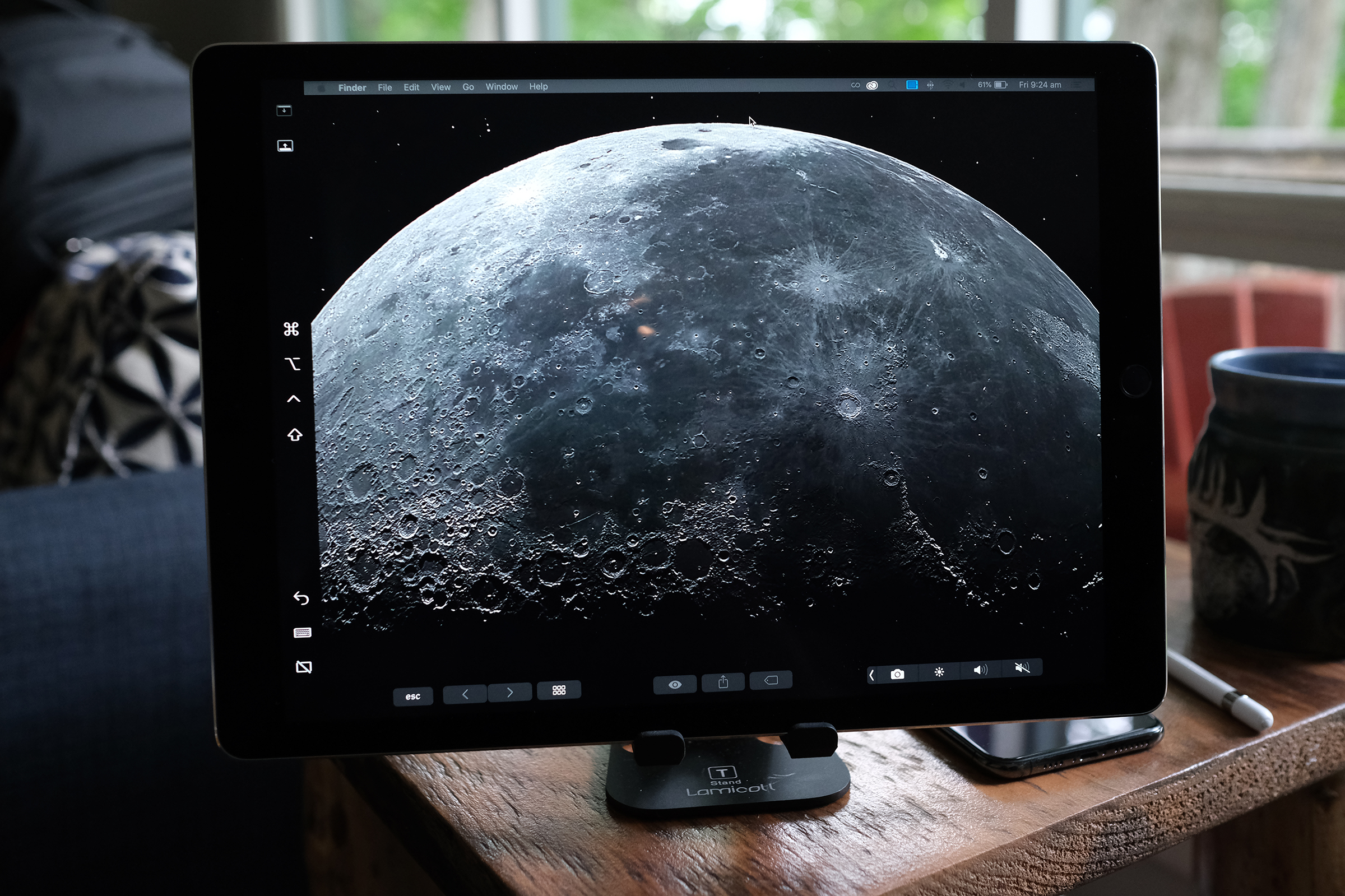 The Touchbar is identical to Apple’s hardware Touchbar, which it includes on MacBook Pros, dating back to its introduction in 2016. The Touchbar has always been kind of a ‘meh’ feature, and some critics vocally prefer the entry-level 13-inch MacBook Pro model that does away with it altogether in favor of an actual hardware Escape key. And on the iPad using Sidecar, you also don’t get what might be its best feature – TouchID. But, if you’re using Sidecar specifically for photo or video editing, it’s amazing to be able to have it called up and sitting there ready to do, as an app-specific dedicated quick action toolbar.

Best of all, Apple made it possible to easily turn off both these features, and to do so quickly right from your Mac’s menu bar. That way, you get the full benefit of your big beautiful iPad display. Sidecar will remember this preference too for next time you connect.

Also new to macOS Catalina is a hover-over menu for the default window controls (those three ‘stoplight’ circular buttons that appear at the top left of any Mac app). Apple now provides options to either go fullscreen, tile your app left or right to take up 50% of your display, or, if you’re using Sidecar, to quickly move the app to Sidecar display or back.

This quick shuffle action works great, and also respects your existing windows settings, so you can move an app window that you’ve resized manually to take up a quarter of your Mac’s display, and then when you send it back from the Sidecar iPad, it’ll return to where you had it originally in the same size and position. It’s definitely a nice step up in terms of native support for managing windows across multiple displays.

I’ve been using Sidecar wirelessly, though it also works wired and Apple has said there shouldn’t really be any performance disparity regardless of which way you go. So far, the wireless mode has exceeded all expectations, and any third-party competitors in terms of reliability and quality. It also works with the iPad Pro keyboard case, which makes for a fantastic input alternative if you happen to be closer to that one instead of the keyboard you’re using with your Mac.

Sidecar also really shines for digital artists, because it supports input via Apple Pencil immediately in apps that have already built in support for stylus input on Macs, including Adobe Photoshop and Affinity Photo. I’ve previously used a Wacom Cintiq 13HD with my Mac for this kind of thing, and I found Apple’s Sidecar to be an amazing alternative, not least of which because it’s wireless and even the 12.9 iPad Pro is such more portable than the Wacom device. Input seems to have very little response lag (like, it’s not even really perceivable), there’s no calibration required to make sure the Pencil lines up with the cursor on the screen, and as I mentioned above, combined with the Sidebar and dedicated ‘Undo’ button, it’s an artistic productivity machine.

The Pencil is the only means of touch input available with Sidecar, and that’s potentially going to be weird for users of other third-party display extender apps, most of which support full touch input for the extended Mac display they provide. Apple has intentionally left out finger-based touch input, because Mac just wasn’t designed for it, and in use that actually tracks with what my brain expects, so it probably won’t be too disorienting for most users.

When Apple introduced the 5K iMac, it left out one thing that had long been a mainstay of that all-in-on desktop – Target Display Mode. It was a sad day for people who like to maximize the life of their older devices. But they’ve more than made up for it with the introduction of Sidecar, which genuinely doubles the utility value of any modern iPad, provided you’re someone for whom additional screen real estate, with or without pressure-sensitive pen input, is something valuable. As someone who often works on the road and out of the office, Sidecar seems like something I personally designed in the room with Apple’s engineering team.