Freelance marketplace Fiverr has become closely associated with the gig economy, but Micha Kaufman argued that not all gig economy companies are created equal.

I spoke to Kaufman yesterday afternoon, after Fiverr debuted on the New York Stock Exchange and spent the day climbing to 90% above the IPO price.

As we talked about Fiverr’s community of freelancers, I brought up the driver strikes before Uber’s IPO and wondered how Kaufman can ensure freelancers can benefit from the company’s success. In response, he pointed out that Fiverr sellers are often highly skilled, and they determine the terms of the job and of payment.

“That is very different than [some of the] other platforms called gig economy,” he said.

He added that this structure means a freelance designer in (say) San Francisco doesn’t have to worry as much about about matching the prices of someone across the world, who has much lower costs and can charge less. 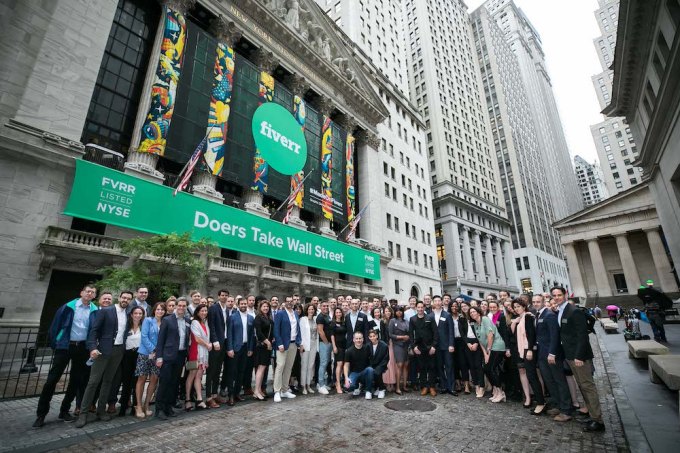 Fiverr at the NYSE

“I think that if you have a market that pushes for bidding, then definitely, yes, there’s a downward pressure,” he said. “In a market where freelancers get to define their own scope, timing and price, you see the opposite trend. What we’re seeing is freelancers all around the world making more and more money very year. It’s a counterintuitive, or countercyclical rather, race to the top.”

To get a little more specific about that: While the company’s S-1 filing doesn’t discuss the income of individual sellers, it says the total value of all transactions on the platform increased from $213 million in 2017 to $293.5 million in 2018, and that it had 255,000 active sellers at end of the first quarter of 2019.

The S-1 also reported that the company saw a net loss of $36.1 million on revenue of $75.5 million in 2018, but Kaufman noted that the losses — as measured in negative EBITDA — are shrinking: “We are on the path to profitability. That’s the balance we’re trying to keep — focusing on growth while building a business that would be profitable in the long term.”

And he suggested that one of the things that impressed Wall Street investors was the fact that Fiverr operates less like a traditional hiring site and is “much more similar to traditional e-commerce businesses like Etsy and Amazon,” where you can browse and purchase the services you need.

No, I’m not selling TechCrunch stories for $20 on Fiverr

As for how going public changes the company, Kaufman said it means he has “a larger constituency to report to now.” But beyond that, he said, “I don’t think that that’s going to change the culture of the business or our focus. What we’re trying to create is this everything store for digital services.”

Kaufman suggested there’s room for geographic expansion, particularly in non-English-speaking countries, and to add new categories of work. More broadly, he said he wants to change the fact that the vast majority of freelancers still get hired via offline channels.

“The average time to order a service on Fiverr is 15 minutes,” he said. “Why would you spend a minute more doing it any other way?”