Video advertising company VidMob is announcing that it has raised $25 million in Series B funding.

When I wrote about VidMob’s seed funding back in 2015, it was focused on building a marketplace that connected marketers and professional video editors. That’s still a component of the VidMob business, said founder and CEO Alex Collmer, but the company has also built a broader platform for video advertising, which it calls the Agile Creative Studio.

So Collmer said that with VidMob, not only can marketers find professionals (editors, animators, graphic designers and more) to create their ads, they can also “with a single click, send hundreds and in some cases thousands of custom ads” to VidMob partners like Facebook, Google/YouTube, Instagram, Snapchat and Twitter.

The platform analyzes how the different creative elements are affecting the way audiences are responding to an ad and uses this data to make campaigns more effective. The result, Collmer said, is that “the decay curve actually inverts and the ad actually improves over time through this iterative process of creating and learning, creating and learning.” Brands using VidMob include Bayer, Intercontinental Hotel Group, Ikea and Neutrogena, as well as startups like Acorns. In a statement, Joshua Palau, the vice president of media platforms and strategy for Bayer U.S., said the platform has “allowed us to meaningfully improve the ROI on our social video campaigns.”

VidMob has now raised more than $45 million in total funding. The round was led by Austin-based BuildGroup, with participation from Acadia Woods, Herington, Interlock Partners, Macanta Investments, the limited partners at Manifest and “brandtech” firm You & Mr Jones.

“VidMob solves a really important pain point for brands — how to deliver the volume of content that brands now need for all the different platforms, at the speed and price they need it at,” said You & Mr Jones founder David Jones in a statement. “In the near future all content will be intelligent and driven by data and VidMob has a product that delivers that now.”

BuildGroup co-founder and CEO Lanham Napier offered a statement praising VidMob for “not only offering up meaningful insights, but also providing the tools and talent to quickly and cost-effectively activate on that intelligence.”

“But it’s their vision for the future that gets us most excited,” Napier added. “As the world moves towards more complex forms of communication, the idea of an API for creativity is so powerful that you can see it becoming another foundational service layer of the web.” 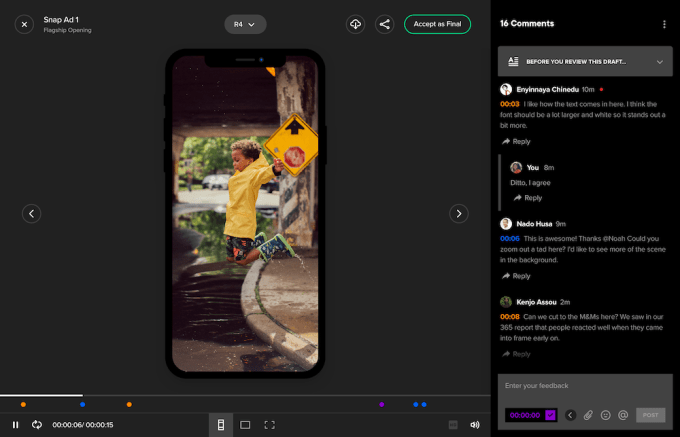 Collmer expanded on this idea in our interview, suggesting that VidMob could eventually do much more than facilitate video ads on social media platforms.

“As the web is moving from text and images to more complex media types — today that’s video, tomorrow it’s augmented reality, who knows what it will be after that — I’m fairly certain the needle is always going to point towards greater complexity,” he said. “That creative friction becomes a tax on the entire internet. We’re trying to build what I think of as an API for creativity … Today, that friction point is frequently with our platform partners, with the Facebooks and Snaps, but we see it expanding to other areas where you see imagery as the central point of communication.”