Earlier today, Tyson Foods announced the launch of its first foray into the meat replacement market with the unveiling of its Raised & Rooted brand.

While the company’s plant-based nuggets present a direct challenge to companies like Beyond Meat, Tyson Foods is playing a different game by introducing consumers to foods that are blended with meat and protein replacements.

So it’s not exactly a direct competitor to Beyond Meat, a former Tyson Foods venture portfolio investment, or Impossible Foods, which are the two current leaders in the growing alterna-beef category.

Rather, it seems to be an attempt to up-sell customers on products with less beef for potentially more money. Tyson did not respond to a request for comment by the time of publication.

For Springdale, Ark.-based Tyson Foods, making alternative proteins is less of an optional strategy and more of a necessary response to what could be an existential threat to the traditional meat market in the U.S. and around the world.

By 2040, traditional meat consumption could fall by 33%, according to a recent analysis by the consulting firm AT Kearny. 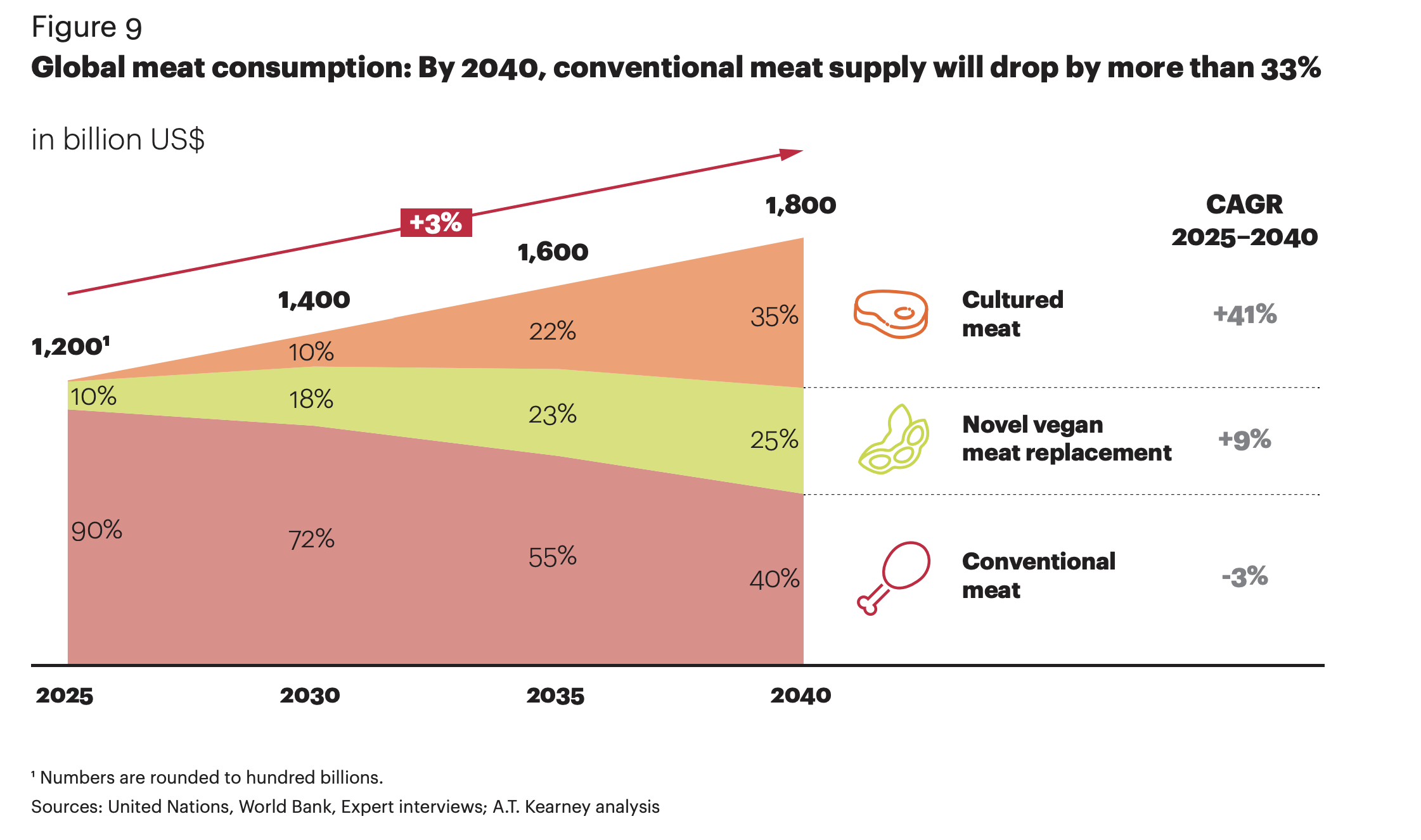 Chart courtesy of AT Kearny

“All in all, cultured meat and new meat replacement products are going to disrupt the $1,000 billion conventional meat industry with all its supplier companies,” the study’s authors write. “This disruption is supported by a general shift toward consumption of non-meat proteins (for example, legumes and nuts) as a consequence of new lifestyle trends, all aimed at a more sustainable and healthier diet, as well as regulatory measures against conventional meat.”

Tyson has launched its new brand with just these pressures in mind. The company is the first large meat producer to confront the changes that are coming to the market at anything approaching the scale of the challenge.

What remains to be seen is whether consumers will respond to the concept of a “blended” burger outside of the fast food restaurants where those kinds of products are already served. It’s trying with its premium sausage brand, Aidells, along with the Raised & Rooted patty, which is a blend of beef and vegetable proteins.

“Today’s consumers are seeking more protein options so we’re creating new products for the growing number of people open to flexible diets that include both meat and plant-based protein,” said Noel White, president and CEO of Tyson Foods, in a statement. “For us, this is about ‘and’ – not ‘or.’ We remain firmly committed to our growing traditional meat business and expect to be a market leader in alternative protein, which is experiencing double-digit growth and could someday be a billion-dollar business for our company.”

Tyson’s plant-based nuggets, made from a blend of pea protein isolate and other plant ingredients, will be on store shelves in the fall, as will the blended beef and vegetable burgers.

Tyson also has bets on other, novel meat replacements and alternative protein sources. The company has invested in lab-grown meat makers like Memphis Meats and Future Meat Technologies and is also backing Mycotechnology, a mushroom-based protein producer, through its venture capital arm, Tyson Ventures.

Investors in newly public Beyond Meat seem un-fazed by Tyson’s new offerings. The stock dipped on the news (and a downgrade from IPO underwriter J.P. Morgan), but it’s still up more than 100% on the year.