As US regulators gear up to launch another antitrust probe of Google’s business, an alternative Android app store is dialling up its long time complaint of anti-competitive behavior against the search and smartphone OS giant.

Portugal-based Aptoide is launching a campaign website to press its case and call for Google to “Play Fair” — accusing Mountain View of squeezing consumer choice by “preventing users from freely choosing their preferred app store”.

Aptoide filed its first EU antitrust complaint against Google all the way back in 2014, joining a bunch of other complainants crying foul over how Google was operating Android.

And while the European Commission did eventually step in, slapping Google with a $5BN penalty for antitrust abuses last summer after a multi-year investigation, rivals continue to complain the Android maker still isn’t playing fair.

In the case of Aptoide, the alternative Android app store says Google has damaged its ability to compete by unjustifiably flagging its app as insecure.

“Since Summer 2018, Google Play Protect flags Aptoide as a harmful app, hiding it in users’ Android devices and requesting them to uninstall it. This results in a potential decrease of unique Aptoide users of 20%. Google Play Protect is Google’s built-in malware protection for Android, but we believe the way it works damages users’ rights,” it writes on the site, where it highlights what it claims are Google’s anti-competitive behaviors, and asks users to report experiences of the app being flagged. 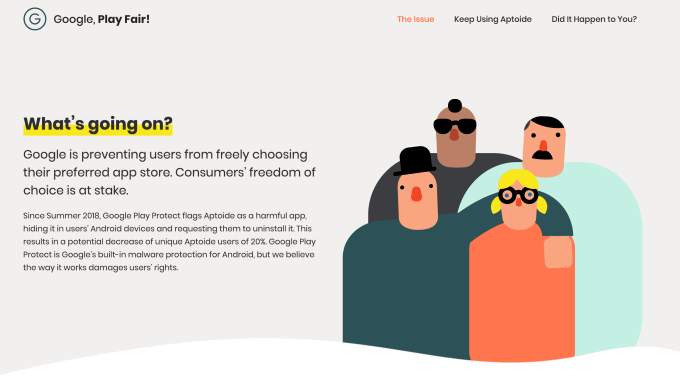 Aptoide says Google has engaged in multiple behaviors that make it harder for it to gain or keep users — thereby undermining its ability to compete with Google’s own Play Store.

“In 2018, we had 222 million yearly active users. Last month (May’19), we had 56 million unique MAU,” co-founder and CEO Paulo Trezentos tells TechCrunch. “We estimate that the Google Play removal and flagging had cause the loss of 15% to 20% of our user base since June’18.”

(The estimate of how many users Aptoide has lost was performed using Google SafetyNet API which he says allows it to query the classification of an app.)

“Fortunately we have been able to compensate that with new users and new partnerships but it is a barrier to a faster growth,” he adds.

“The googleplayfair.com site hopes to bring visibility to this situation and help other start ups that may be under the same circumstances.”

Among the anti-competitive behaviors Aptoide accuses Google of engaging in are flagging and suspending its app from users’ phones — without their permission and “without a valid reason”.

“It hides Aptoide. User cannot see Aptoide icon and cannot launch. Even if they go to ‘settings’ and say they trust Aptoide, Aptoide installations are blocked,” he says. “If it looks violent, it’s because it’s a really aggressive move and impactful.”

Here’s the notification Aptoide users are shown when trying to override Google’s suspension of Aptoide at the package manager level: 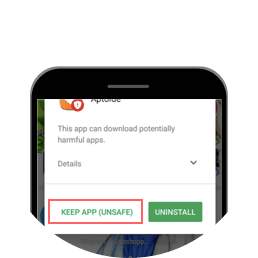 “The user has to go to Play Protect settings (discover it it’s not easy) and turn off Play protect for all apps.” 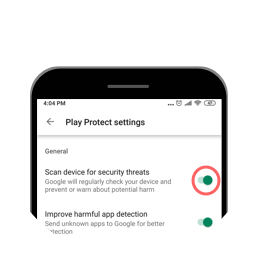 He argues there is no justification for Aptoide’s alternative app store being treated in this way.

“Aptoide is considered safe both by security researchers [citing a paper by Japanese security researchers] and by Virus Total (a company owned by Google),” says Trezentos, adding: “Google is removing Aptoide from users phone only due to anticompetitive practices. Doesn’t want anyone else as distribution channel in Android.”

On the website Aptoide has launched to raise awareness and inform users and other startups about how Google treats its app, it makes the claim that its store is “proven… 100% secure” — writing:

We would like to be treated in a fair way: Play Protect should not flag Aptoide as a harmful app and should not ask users to uninstall it since it’s proven that it’s 100% secure. Restricting options for users goes against the nature of the Android open source project [ref10]. Moreover, Google’s ongoing abusive behaviour due to it’s dominant position results in the lack of freedom of choice for users and developers.We would like to keep allowing users and developers to discover and distribute apps in the store of their choice. A healthy competitive market and a variety of options are what we all need to keep providing the best products.

Trezentos stands by the “100% secure” claim when we query it.

“We think that we have a safer approach. We call it  ‘security by design’: We don’t consider all apps secure in the same way. Each app has a badge depending on the reputation of the developer: Trusted, Unknown, Warning, Critical,” he says.

“We are almost 100% sure that apps with a trusted badge are safe. But new apps from new developers, [carry] more risk in spite of all the technology we have developed to detect it. They keep the badge ‘unknown‘ until the community vote it as trusted. This can take some weeks, it can take some months.”

“Of course, if our anti-malware systems detect problems, we classify it as ‘critical’ and the users don’t see it at all,” he adds.

Almost 100% secure then. But if Google’s counter claim to justify choking off access to Aptoide is that the app “can download potentially harmful apps” the same can very well be said of its Play Store. And Google certainly isn’t encouraging Android users to pause that.

On the competition front, Aptoide presents a clear challenge to Google’s Android revenues because it offers developers a more attractive revenue split — taking just 19%, rather than the 30% cut Google takes off of Play Store wares. (Aptoide couches the latter as “Google’s abusive conditions”.)

So if Android users can be persuaded to switch from Play to Aptoide, developers stand to gain — and arguably users too, as app costs would be lower.

While, on the flip side, Google faces its 30% cut being circumvented. Or else it could be forced to reduce how much it takes from developers to give them a greater incentive to stock its shelves with great apps.

As with any app store business, Aptoide’s store of course requires scale to function. And it’s exactly that scale which Google’s behavior has negatively impacted since it began flagging the app as insecure a year ago, in June 2018, squeezing the rival’s user-base by up to a fifth, as Aptoide tells it.

Trezentos says Google’s flagging of its app store affects all markets and “continues to this day” — despite a legal ruling in its favor last fall, when a court in Portugal ordered Google to stop removing Aptoide without users’ permission.

“Google is ignoring the injunction result and is disregarding the national court. No company, independently of the size, should be above court decisions. But it seems that is the case with Google,” he says.

“Our legal team believe that the decision applies to 82 countries but we are pursuing first the total compliance with the decision in Portugal. From there, we will seek the extension to other jurisdictions.”

“We tried to contact Google several times, via Google Play Protect feedback form and directly through LinkedIn, and we’ve not had any feedback from Google. No reasons were presented. No explanation, although we are talking about hiding Aptoide in millions of users’ phones,” he adds.

“Our point in court it’s simple: Google is using the control at operating system level to block competitors at the services level (app store, in this case). As Google has a dominant position, that’s not legal. Court [in Portugal] confirmed and order Google to stop. Google didn’t obey.”

Aptoide has not filed an antitrust complaint against Google in the US — focusing its legal efforts on that front on local submissions to the European Commission.

But Trezentos says it’s “willing to cooperate with US authorities and provide factual data that shows that Google has acted with anti-competitive behaviour” (although he says no one has come knocking to request such collaboration yet.)

In Europe, the Commission’s 2018 antitrust decision was focused on Android licensing terms — which led to Google tweaking the terms it offers Android OEMs selling in Europe last fall.

Despite some changes rivals continue to complain that its changes do not go far enough to create a level playing field for competition.

There has also not been any relief for Aptoide from the record breaking antitrust enforcement. On the contrary Google appears to have dug in against this competitive threat.

“The remedies are positive but the scope is very limited to OEM partnerships,” says Trezentos of the EC’s 2018 Android antitrust decision. “We proposed additionally that Google would be obliged to give the same access privileges over the operating system to credible competitors.”

We’ve reached out to the Commission for comment on Aptoide’s complaint.

While it’s at least technically possible for an OEM to offer an Android device in Europe which includes key Google services (like search and maps) but preloads an alternative app store, rather than Google Play, it would be a brave device maker indeed to go against the consumer grain and not give smartphone buyers the mainstream store they expect.

So, as yet, there’s little high level regulatory relief to help Aptoide. And it may take a higher court than a Portuguese national court to force Google to listen.

But with US authorities fast dialling up their scrutiny of Mountain View, Aptoide may find a new audience for its complaint.

“The increased awareness to Google practices is reaching the regulators,” Trezentos agrees, adding: “Those practices harm competition and in the end are bad for developers and mobile users.”

We reached out to Google with questions about its treatment of Aptoide’s rival app store — but at the time of writing the company had not responded with any comment.

There have also been some recent rumors that Aptoide is in talks to supply its alternative app store for Huawei devices — in light of the US/China trade uncertainties, and the executive order barring US companies from doing business with the Chinese tech giant, which have led to reports that Google intends to withdraw key Android services like Play from the company.

But Trezentos pours cold water on these rumors, suggesting there has been no change of cadence in its discussions with Huawei.

“We work with three of top six mobile OEMs in the world. Huawei is not one of them yet,” he tells us. “Our Shengzhen office had been in conversations for some months and they are testing our APIs. This process has not been accelerated or delayed by the recent news.”