Just as podcasting hits the mainstream in the west, China, which is also experiencing an audio boom, is seeing restrictions tighten around shows as evidenced by new curbs from Apple.

This week, the U.S. tech giant has pulled a handful of Chinese-language podcasts from its Chinese Podcasts store, one of the few remaining channels for people in mainland China to find content immune from scrutiny by the country’s media regulators.

The crackdown seems to be taking an incremental pace so far. Three podcasters, including hosts of NickTalk and Two I.T. Uncles (两个iT大叔), confirmed with TechCrunch on Tuesday that their shows disappeared from Apple’s Chinese Podcasts app this week.

Several other noted shows, including Yitianshijie (一天世界), appear to remain unaffected, while others, such as Suijiya (随机鸭), seem to have suffered from a partial blockade. That’s to say that individual episodes appear in search results, but the podcast homepages are inaccessible, which makes it impossible for new subscribers to sign up. 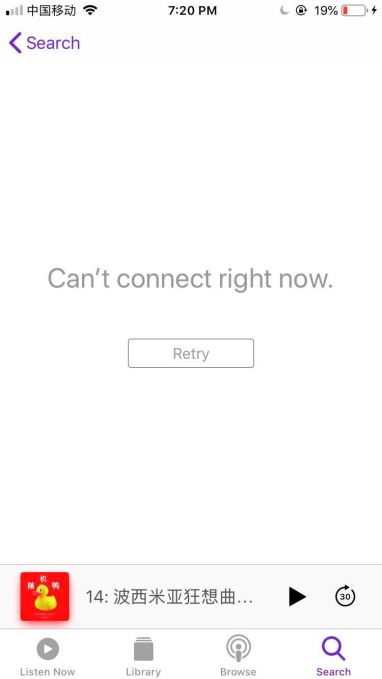 A few Chinese podcasts have disappeared from Apple’s Chinese Podcasts store since the beginning of June. / Screenshot by TechCrunch

In an email reply to Two I.T. Uncles reviewed by TechCrunch, Apple confirmed that the podcast is currently available in “all territories except China,” adding that “only shows from select partners are available in the Chinese Apple Podcasts store.”

Apple did not provide further details as to what it means by “select partners.” TechCrunch has contacted the company for clarification, but we had not heard back at the time of writing.

The removals appear to be ill-timed, coinciding with the thirtieth anniversary of China’s Tiananmen Square crackdown, which falls on June 4th and has already led to tighter control on China’s online discourse.

That’s a big deal for Apple, as people have long celebrated its Podcasts app as unhampered by Beijing’s censorship. The IPN, a variety of popular Chinese talk shows on different topics, has repeatedly urged listeners to choose international services like Apple Podcasts, Castro and Overcast over Himalaya FM, Lizhi FM and other local counterparts that are prone to Chinese reins.

Some have foretold the curbs, arguing that this marks Apple’s latest step to fill a regulatory loophole in its Chinese service. Word on the street has it that the American company’s “select partners” might include Himalaya and Lizhi, which not only deliver shows to listeners but also host the content.

Under Chinese laws, they must screen the podcasts before making them public. In other words, if Apple China starts requesting episodes to be kept on these platforms, the content will come under scrutiny by China’s often murky and vague media policies.

By contrast, Apple Podcasts serve as directories of podcast RSS feeds, which keep information about where a show is stored and when a new episode has been added, meaning it’s usually more hands-off compared to the hosting services.

“The Apple Podcasts store is like an aggregate search engine,” said Nick Zhang, host of NickTalk. “That’s why my episode about the June 4th [incident] could still play as usual.”

A number of popular English-language podcasts from the west have long been unavailable in the Chinese store, but the latest crackdown seems to have extended the control to overseas Chinese content. Chinese podcasts uploaded from non-Chinese Apple accounts were also being restricted, according to a Telegram notice posted by the show Renjian Zhinan (人间指南), citing tests it had performed.

This isn’t the first time Apple has placed limits on its Chinese services. In 2017, the firm dropped hundreds of VPNs, tools that help local internet users access overseas sites that are otherwise blocked, from its Chinese App Store to comply with local internet laws. In another major step last year, Apple began storing data of its China-based users locally, making seas of digital footprints accessible to local authority.