If you’re a big basketball fan like me, you’ll be glued to the TV watching the Golden State Warriors take on the Toronto Raptors in the NBA finals. (You might be surprised who I’m rooting for.)

In honor of the big games, we took a shot at breaking down investment activities of the players off the court. Last fall, we did a story highlighting some of the sport’s more prolific investors. In this piece, we’ll take a deeper dive into just what having an NBA player as a backer can do for a startup beyond the capital involved. But first, here’s a chart of some startups funded by NBA players, both former and current. 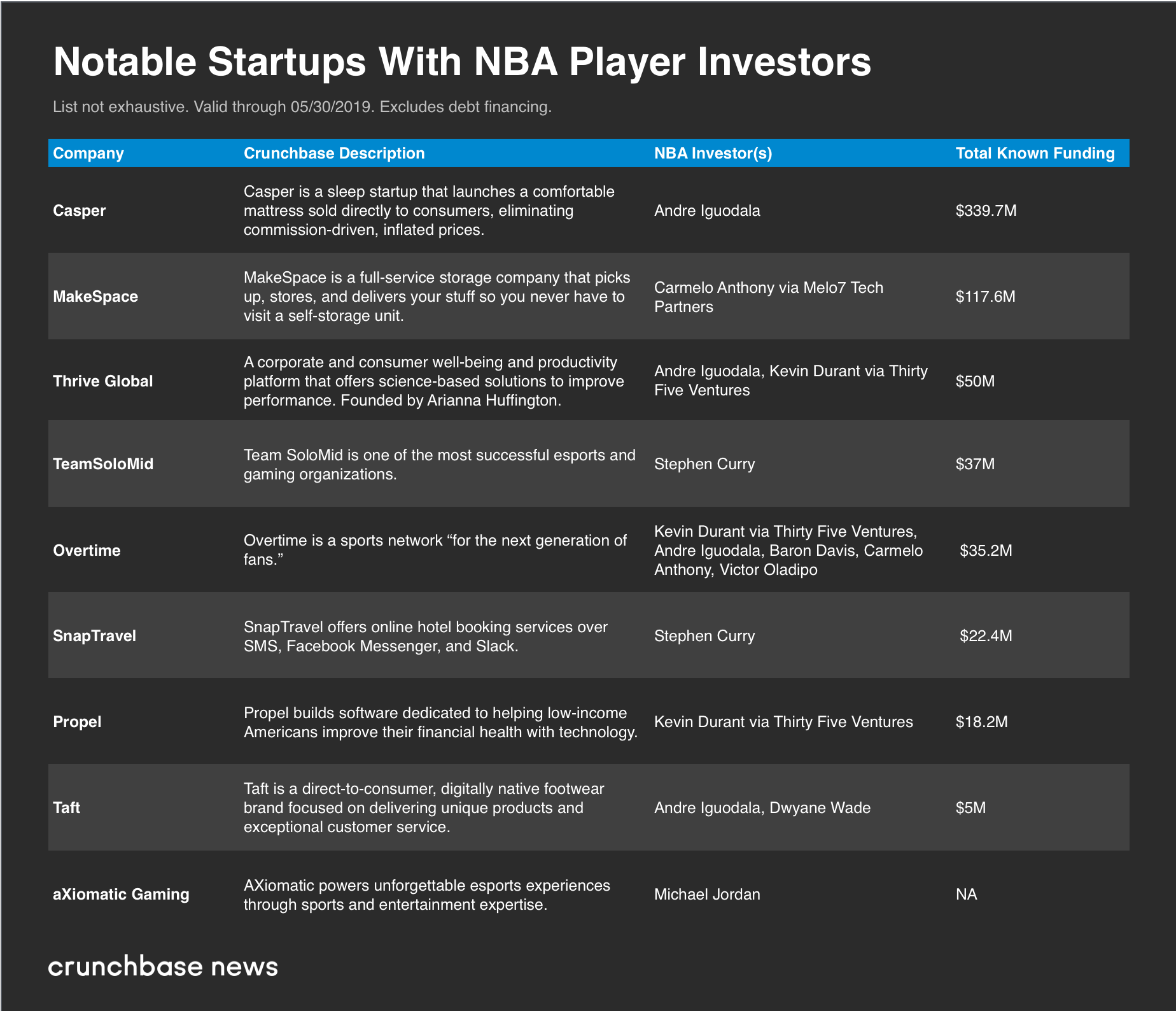 In February, we covered how digital sports media startup Overtime had raised $23 million in a Series B round of funding led by Spark Capital. Former NBA Commissioner David Stern was an early investor and advisor in the company (putting money in the company’s seed round). Golden State Warriors player Kevin Durant invested as part of the company’s Series A in early 2018 via his busy investment vehicle, Thirty Five Ventures. And then, Carmelo Anthony invested (via his Melo7 Tech II fund) earlier this year. Other NBA-related investors include Baron Davis, Andre Iguodala and Victor Oladipo, and other non-NBA backers include Andreessen Horowitz and Greycroft.

I talked to Overtime’s CEO, 27-year-old Zack Weiner, about how the involvement of so many NBA players came about. I also wondered what they brought to the table beyond their cash. But before we get there, let me explain a little more about what Overtime does.

Founded in late 2016 by Dan Porter and Weiner, the Brooklyn company has raised a total of $35.3 million. The pair founded the company after observing “how larger, legacy media companies, such as ESPN, were struggling” with attracting the younger viewer who was tuning into the TV less and less “and consuming sports in a fundamentally different way.”

So they created Overtime, which features about 25 to 30 sports-related shows across several platforms (which include YouTube, Snapchat, Instagram, Facebook, TikTok, Twitter and Twitch) aimed at millennials and the Gen Z generation. Weiner estimates the company’s programs get more than 600 million video views every month.

In terms of attracting NBA investors, Weiner told me each situation was a little different, but with one common theme: “All of them were fans of Overtime before we even met them…They saw what we were doing as the new wave of sports media and wanted to get involved. We didn’t have to have 10 meetings for them to understand what we were doing. This is the world they live and breathe.”

So how is having NBA players as investors helping the company grow? Well, for one, they can open a lot of doors, noted Weiner.

“NBA players are very powerful people and investors,” he said. “They’ve helped us make connections in music, fashion and all things tangential to sports. Some have created content with us.”

In addition, their social clout has helped with exposure. Their posting or commenting on Instagram gives the company credibility, Weiner said.

“Also just, in general, getting their perspectives and opinions,” he added. “A lot of our content is based on working with athletes, so they understand what athletes want and are interested in being a part of.”

It’s not just sports-related startups that are attracting the interest of NBA players. I also talked with Hussein Fazal, the CEO of SnapTravel, which recently closed a $21.2 million Series A that included participation from Telstra Ventures and Golden State Warriors point guard Stephen Curry.

Founded in 2016, Toronto-based SnapTravel offers online hotel booking services over SMS, Facebook Messenger, Alexa, Google Home and Slack. It’s driven more than $100 million in sales, according to Fazal, and is seeing its revenue grow about 35% quarter over quarter.

Like Weiner, Fazal told me that Curry’s being active on social media about SnapTravel helped draw positive attention and “add a lot of legitimacy” to his company.

“If you’re an end-consumer about to spend $1,000 on a hotel booking, you might be a little hesitant about trusting a newer brand like ours,” he said. “But if they go to our home page and see our investors, that holds some weight in the eyes of the public, and helps show we’re not a fly-by-night company.”

Another way Curry’s involvement has helped SnapTravel is in terms of the recruitment and retainment of employees. Curry once spent hours at the office, meeting with employees and doing a Q&A.

“It was really cool,” Fazal said. “And it helps us stand out from other startups when hiring.”

Regardless of who wins the series, it’s clear that startups with NBA investors on their team have a competitive advantage. (Still, Go Raptors!)