Baidu, heralded as the Google of China, felt the heat from its continued spending on artificial intelligence and other next-gen technologies that have yet to reach the mass market as it unveiled troubled first-quarter financials on Thursday.

The company logged a net loss attributable to shareholders of $49 million in the quarter ended March 31, marking the first quarterly loss since it went public in 2005. That compares to net income of 6.69 billion yuan ($970 million) a year before. Content costs surged 47% to $917 million on account of continued investments in Baidu’s Netflix-like video streamer iQiyi, while research and development expenses stood at $621 million, up 26%.

In a letter to staff today, founder and CEO Robin Li acknowledged that Baidu faces a “grim situation” and reiterated the firm’s strategy to “invest in return for growth.”

Baidu remains as the largest search service in China, with a 67% market share per data from research firm StatCounter. It’s reaped huge rewards from search ads in the PC era, but as consumers allocate attention to new forms of mobile services — notably recommendation-based apps — to discover content, Baidu is losing its appeal.

A new era of recommendations

In an effort to stay relevant, Baidu added a personalized news feed to its search app in 2016. Instead of inputting what they look for, users can now wait passively for Baidu algorithms to display content based on their past habits, a model pioneered by TikTok’s parent firm ByteDance that has propelled Baidu, Alibaba and Tencent — collectively known as the “BAT” for their internet dominance in China — to follow suit.

Tencent, for instance, introduced the Tiantian Kuaibao (天天快报) app four years ago in what many saw as its catch-up with ByteDance’s customized news aggregator Jinri Toutiao (今日头条). Next door at Alibaba, the e-commerce leader reconfigured its Taobao shopping app to emphasize product recommendations, a new driver for conversion rates.

Advertisers are also responding. The market for feed-based ads ballooned from a meager 5.2 billion yuan ($750 million) in 2014 to 166.2 billion yuan in 2019, according to estimates from research firm Analysys.

Baidu’s new two-legged strategy means feed is now of equal, if not more, weight alongside search as the company better embraces the mobile age. Indeed, Baidu officially renamed its “search business” to “mobile business” this quarter. Xiang Hailong, senior vice president of the search business and one of Li’s closest lieutenants, resigned for “personal reasons” after 14 years with Baidu, the company announced today. At its peak, Baidu’s search-focused ad business accounted for more than 90% of revenue. 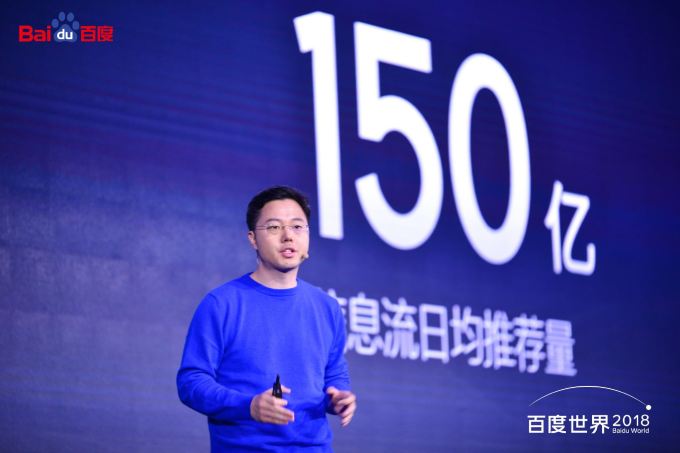 Shen Dou, who previously oversaw mini apps, short videos and other mobile-first products at Baidu, took up the reins of the newly minted mobile business.

Baidu reached 174 million daily active users on its two-in-one app for search and feed in Q1, a 28% year-over-year growth. Its revenue for the period rose slightly to 24.1 billion yuan ($3.5 billion), up 15% year-over-year.

The addition of algorithm-powered feed is part of Baidu’s grander vision to lead in China’s artificial intelligence wave, which is expected to undergird self-driving, voice bots and more. Baidu’s AI initiative took a hit with the departure of world-renown scientist Lu Qi as company COO, but it continued to invest heavily in the space. In 2018, Baidu recorded the most autonomous miles in Beijing, reached 200 million devices through its smart voice assistant and was the most active corporate investor worldwide in AI startups according to CB Insights.

Updated with analysis on China’s news feed market and details of Baidu’s strategies.