As containers and microservices have proliferated, a new kind of tool called the service mesh has developed to help manage and understand interactions between services. While Kubernetes has emerged as the clear container orchestration tool of choice, there is much less certainty in the service mesh market. Solo.io today announced a new open-source tool called Service Mesh Hub, designed to help companies manage multiple service meshes in a single interface.

It is early days for the service mesh concept, but there are already multiple offerings, including Istio, Linkerd (pronounced Linker-Dee) and Envoy. While the market sorts itself it out, it requires a new set of tools, a management layer, so that developers and operations can monitor and understand what’s happening inside the various service meshes they are running.

Idit Levine, founder and CEO at Solo, says she formed the company because she saw an opportunity to develop a set of tooling for a nascent market. Since founding the company in 2017, it has developed several open-source tools to fill that service mesh tool vacuum.

Levine says that she recognized that companies would be using multiple service meshes for multiple situations and that not every company would have the technical capabilities to manage this. That is where the idea for the Service Mesh Hub was born.

It’s a centralized place for companies to add the different service mesh tools they are using, understand the interactions happening within the mesh and add extensions to each one from a kind of extension app store. Solo wants to make adding these tools a simple matter of pointing and clicking. While it obviously still requires a certain level of knowledge about how these tools work, it removes some of the complexity around managing them. 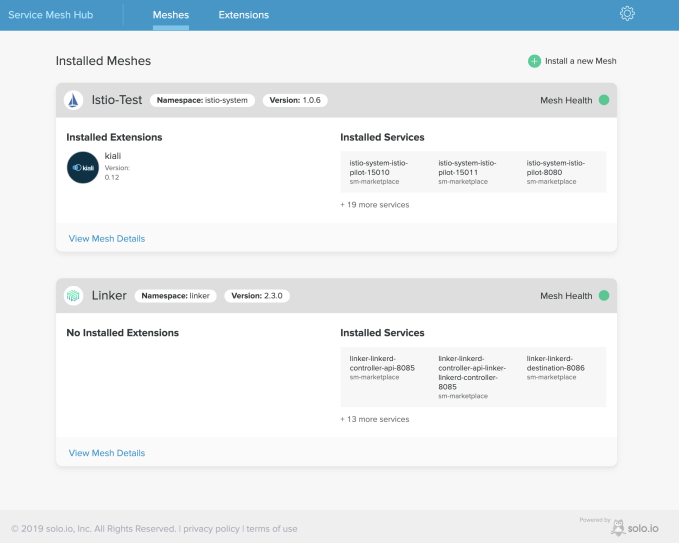 “The reason we created this is because we believe service mesh is something big, and we want people to use it, and we feel it’s hard to adopt right now. We believe by creating that kind of framework or platform, it will make it easier for people to actually use it,” Levine told TechCrunch.

For every abstraction it seems, there is a new set of problems to solve. The service mesh is a response to the problem of managing multiple services. It solves three key issues, according to Levine. It allows a company to route the microservices, have visibility into them to see logs and metrics of the mesh and to provide security to manage which services can talk to each other.

Levine’s company is a response to the issues that have developed around understanding and managing the service meshes themselves. She says she doesn’t worry about a big company coming in and undermining her mission because she says that they are too focused on their own tools to create a set of uber-management tools like these (but that doesn’t mean the company wouldn’t be an attractive acquisition target).

So far, the company has taken more than $13 million in funding, according to Crunchbase data.

As Kubernetes grows, a startup ecosystem develops in its wake