For a brief time, DJI and GoPro were partners — or at least uncomfortable allies. Way back in 2014, the companies were joined together with the intention of building a drone designed to capture athletes in motion. It must have seemed like a perfect piece of synergy from two players at the top of their respective games.

Of course, things didn’t shake out that way. The best laid plans and all that. GoPro went all in on its own drone, but Karma’s launch was wobbly, to say the least. Sixteen days after release, GoPro recalled the drone after battery issues caused it to start falling from the sky. The drone was re-released, but the division was seemingly doomed from the beginning. Early last year, the company announced plans to axe around a fifth of its staff, effectively ending its drone division in the process.

DJI’s own business, on the other hand, has been booming. The Mavic Pro, announced shortly after the Karma, has redefined the consumer drone space, spawning a sequel and several other folding quadcopters from the company, including the Mavic Air, Zoom and Spark. All the while, the Shenzhen-based company has been making strides in imaging, with products like the impressive Osmo Pocket gimbal.

But until now, DJI had never taken a direct swing at GoPro’s true bread and butter: the action camera.

The Osmo Action is a shot across the bow. DJI is gunning directly for GoPro with its own action camera that brings a compelling feature set to the conversation. The camera arrives at a time of relative calm for GoPro. The company’s first quarter financials were looking up, with a 20% year-over-year revenue increase.

Just yesterday, the company’s stock price got a healthy bump on the news that it was shifting manufacturing to Mexico in an attempt to address rising U.S. tariffs resulting from the company’s Chinese manufacturing. Thinknum published its own take on GoPro’s future, as the California-based company appears to be undergoing a hiring spike on the software side. We’ve reached out to GoPro, asking whether this points to a shift away from hardware moving forward, but have yet to hear back.

For now, of course, GoPro’s still very much invested in the action camera category. The GoPro Hero7 arrived late last year to positive reviews. Our own Lucas Matney gave it good marks for its stabilization and live streaming capabilities, while noting that the company hadn’t made many strides on the hardware front since the last gen.

[GoPro’s 2018 story]  seems to be a more conservative one with the company’s new flagship device the Hero7 Black moving mostly laterally on hardware specs while throwing its focus to software tech like digital video stabilization. The moves seem designed to reduce R&D costs while widening the gap between the low and high-end on the company’s far cleaner new product line.

While the action camera market has been crowded for several years now, GoPro’s name continues to be synonymous with the category for many consumers. DJI is far from the first company to go head to head with GoPro in the space, but in 2019, it may well be the best positioned. It has proven itself a master of imaging with drones and gimbals, making the move into action cameras an easy enough lift.

Still, DJI knows enough to not enter a new category without actually bringing something new to the table. The Osmo Action certainly looks like a GoPro at first glance. Imitation is the sincerest form of flattery and all of that, but after a decade and a half of GoPro Heroes, the entire industry appears to have settled on the boxy design as the ideal form factor, with regards to portability, durability and all of that other fun stuff. 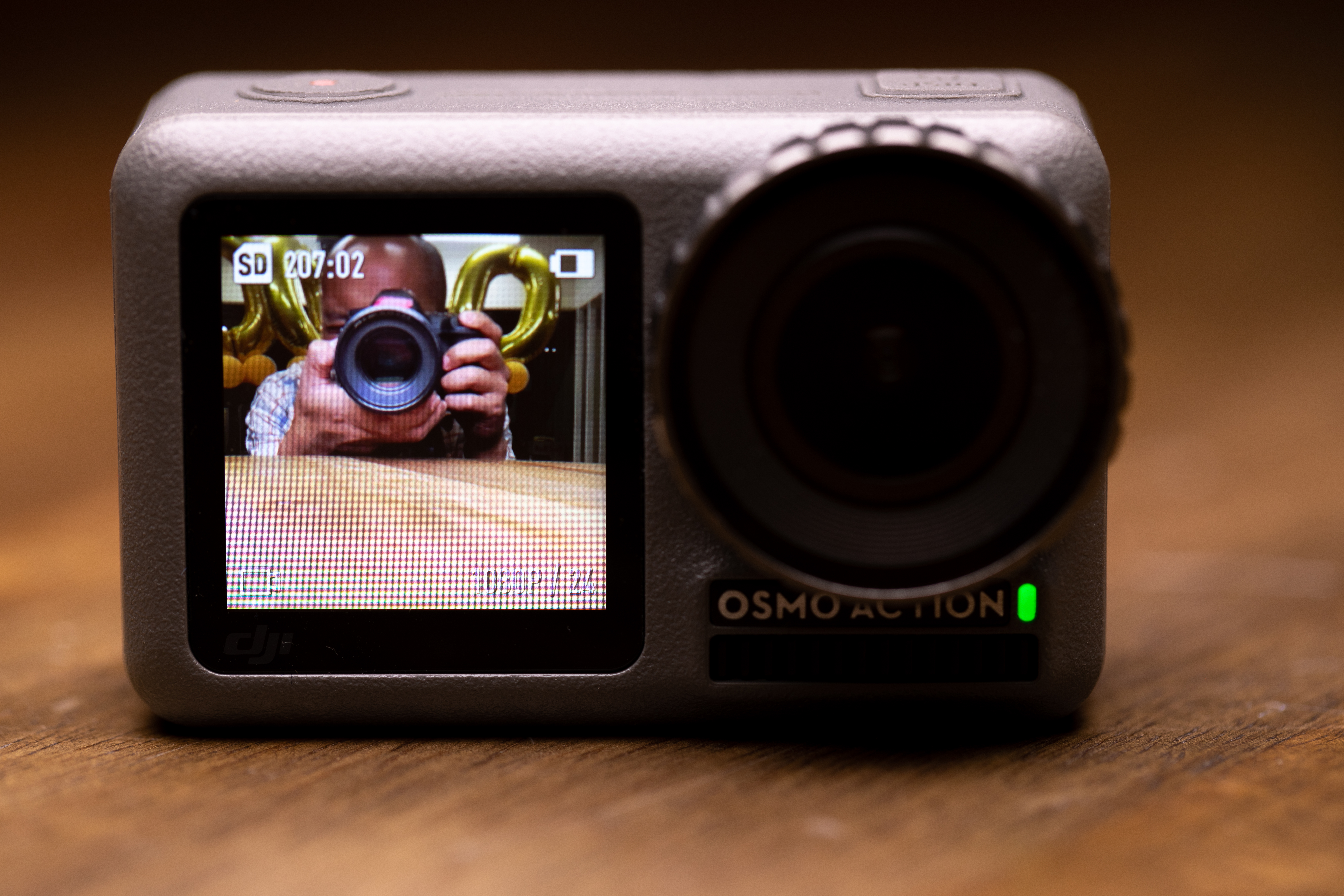 The most immediate difference is at the dual-screen design. There’s a standard 2.25-inch rear touchscreen, coupled with a 1.4-inch display on the front. The new feature certainly makes sense for quick setup options and selfies. While it’s true that plenty of action cameras offer streaming to mobile devices, the front screen works really well for last-minute adjustments — and to give you a little added confidence that the camera is capturing what you want.

TechCrunch video producer Gregory Manalo has been playing around with the Osmo Action for a couple of weeks now and so far has a lot of nice things to say about the execution. Like me, he wasn’t entirely sold on the front-facing screen initially, but has since come to appreciate the value it adds.

“I found it great for composing the shot on my motorcycle,” Gregory reports back. “You can switch back to the other screen while still recording. Switching screens was snappy. The lack of touch on the front screen is a bummer but not a deal breaker.”

The camera utilizes DJI’s proprietary Action OS. I played around with it a bit myself in a briefing about a month or so ago at a parkour gym in Brooklyn. There was a bit of a learning curve for my first few minutes, but once you’ve got the initial lay of the land, it’s quite easy to use on the fly. Gregory concurs, calling it “clean and easy to navigate.”

Ditto for SnapShot. The feature is designed to capture quick shots on the go. As anyone who’s ever used an action (or frankly any) camera can tell you, things don’t always go the way you’ve mapped them out in your head. Press the shutter button once and the camera will power up and start recording in less than two seconds.

Of course, you do lose the time it takes to fire up. Gregory again: “What would be even cooler is a pre-record option so that it covers that two seconds of lag. But I’m guessing that would either zap the batteries sooner or add more bulk to the camera somehow.” I suspect that’s a pretty fair assessment of the camera’s limitations on that front.

Once fired up, the camera is capable of shooting 4K videos at up to 60FPS, along with 12-megapixel photos. The Osmo Action features an option effect to de-warp videos, removing the fisheye effect in the process. And in keeping with the rest of DJI’s offerings, there are a number of different in-camera effects for creating compelling videos on the fly, including time-lapse, 8x slow motion and a variety of custom exposure effects that will give you cool shots of things like the stars. 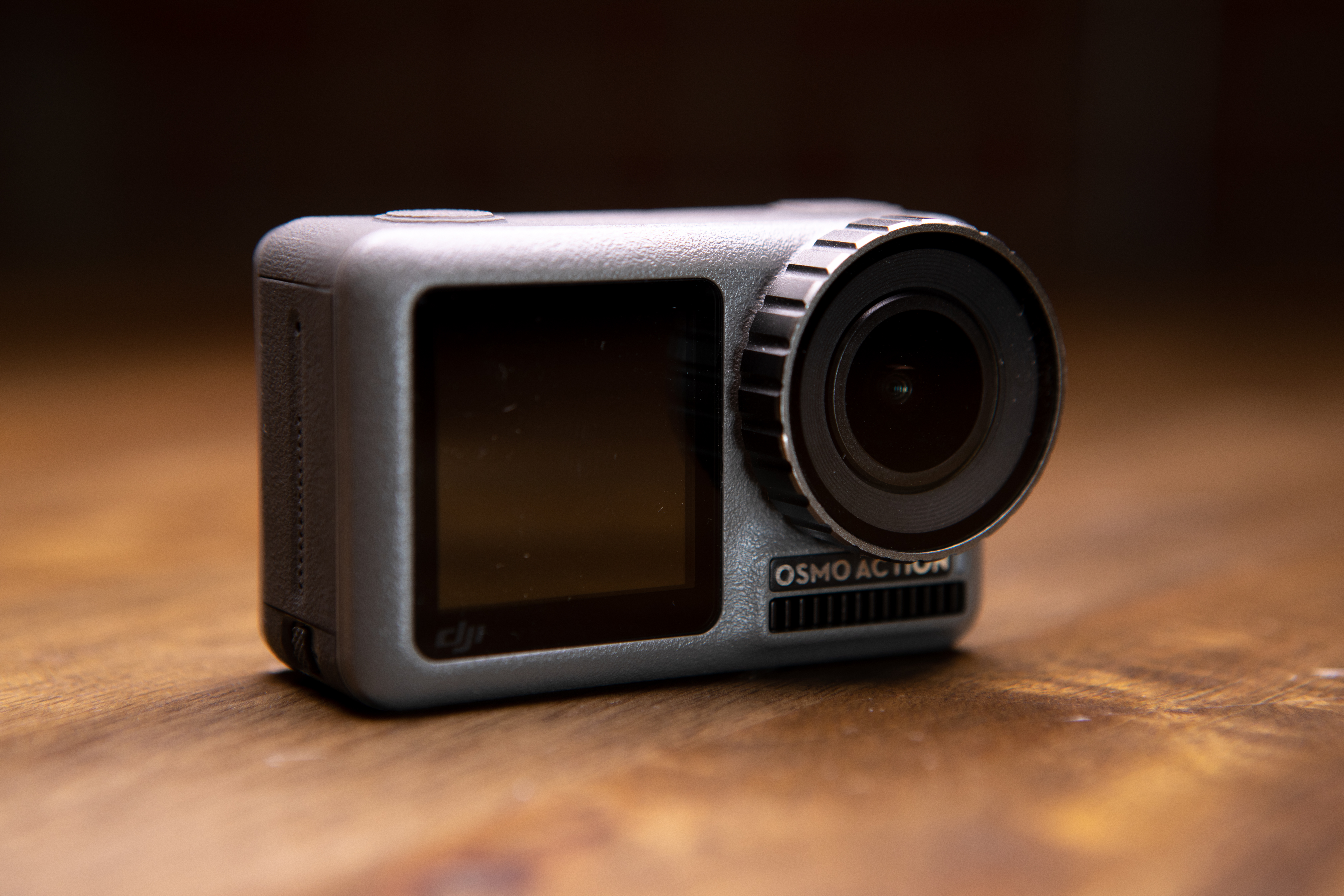 From a shooting standpoint, however, the biggest standouts are HDR and, naturally, Electronic Image Stabilization — something DJI’s perfected over several generations of drones. Strangely, in the current configuration, however, the two features don’t appear to work in tandem.

“The HDR video feature claims three stops of additional dynamic range in the scene with natural transitions between light and dark areas,” Gregory says. “Based on the footage you can definitely tell a difference. I’d shoot with HDR more often than not, just so I can have the information in the footage when I go to post. But here’s the trade-off: EIS cannot be enabled in HDR video.”

It could be arriving in a firmware update, or maybe it’s just more than the hardware is currently capable of handling. Either way, it seems like a prime candidate for some future upgrade. For now, however, most of the nits that can be picked here are on the small side. That’s fairly remarkable for what’s essentially a first-generation product — albeit one from a well-established company.

The Osmo Action is available today, priced at $349. That puts the camera at $50 below the Hero7 Black’s $399 retail price. Though GoPro’s premium action camera has been on sale for some time now. It’s currently priced at $299 on the company’s official site, perhaps in anticipation of the Osmo’s release.

Whatever the case, DJI’s made it very clear that it’s not messing around here. GoPro’s status as the end all, be all of action cameras probably isn’t going away any time soon, but DJI just made an extremely compelling argument for its own spot in the conversation.