Whether you like it or not, facial recognition tech to check in for your flight will soon be coming to an airport near you.

More than a dozen U.S. airports are already rolling out the technology, with many more to go before the U.S. government hits its target of enrolling the largest 20 airports in the country before 2021.

Facial recognition is highly controversial and has many divided. On the one hand, it reduces paper tickets and is meant to be easier for travelers to check in at the airport before their flight. But facial recognition also has technical problems. According to a Homeland Security watchdog, the facial recognition systems used at airports only worked 85% in some cases. Homeland Security said the system is getting better over time and will be up to scratch by the supposed 2021 deadline — even if the watchdog has its doubts.

Many also remain fearful of the privacy and legal concerns. After all, it’s not Customs and Border Protection collecting your facial recognition data directly — it’s the airlines — and they pass it on to the government.

Delta debuted the tech last year, scanning faces before passengers fly. JetBlue also followed suit, and many more airlines are expected to sign up. That data is used to verify boarding passes before travelers get to their gate. But it’s also passed on to Customs and Border Protection to check passengers against their watchlists — and to crack down on those who overstay their visas.

Clearly that’s rattling travelers. In a recent Twitter exchange with JetBlue, the airline said customers are “able to opt out of this procedure.”

That’s technically true, although you might not know it if you’re at one of the many U.S. airports. The Electronic Frontier Foundation found that it’s not easy to opt out, but it is possible. 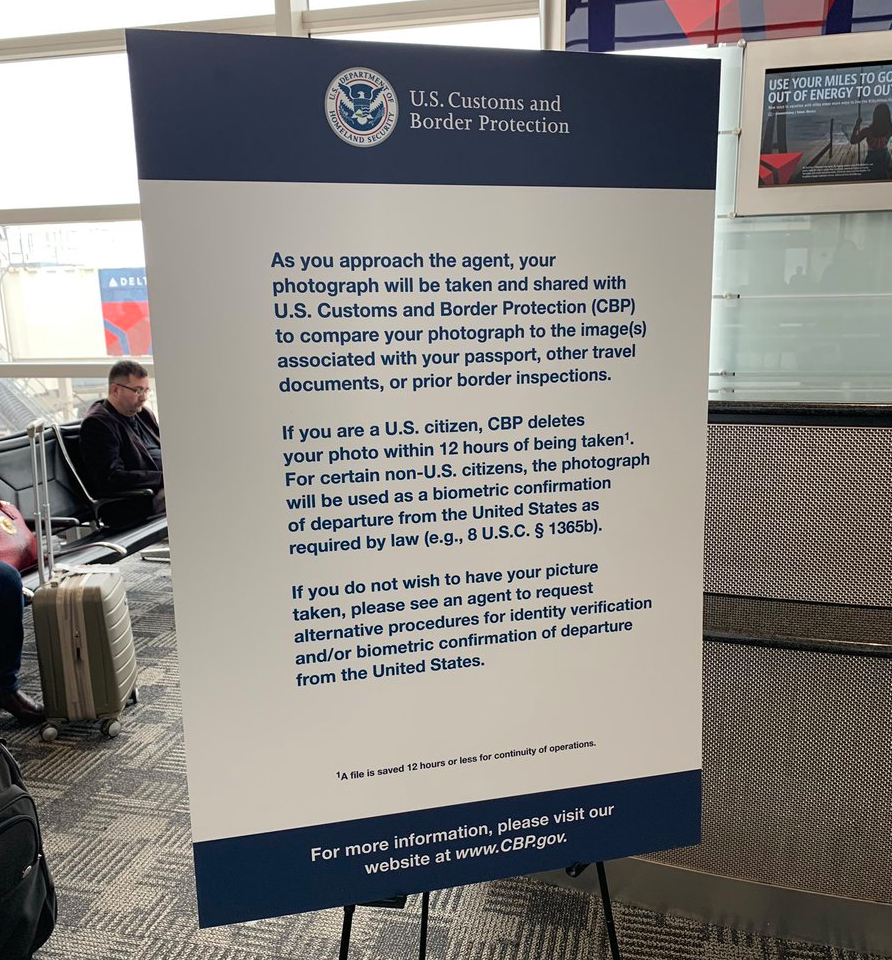 If you’re a U.S. citizen, you can opt out by telling an officer or airline employee at the time of a facial recognition scan. Border officials or airline staff will manually check your passport or boarding pass like they would normally do before you’ve boarded a plane.

Be on the lookout for any signs that say you can opt out, but also be mindful that there may be none at all. You may have to opt out multiple times from arriving at the airport until you reach your airplane seat.

“It might sound trite, but right now, the key to opting out of face recognition is to be vigilant,” wrote EFF’s Jason Kelley.

Bad news if you’re not an American: you will not be allowed to opt out.

“Once the biometric exit program is a nationally-scaled, established program, foreign nationals will be required to biometrically confirm their exit from the United States at the final [boarding] point,” said CBP spokesperson Jennifer Gabris in an earlier email to TechCrunch. “This has been and is a Congressional mandate,” she said.

There are a few exceptions, such as Canadian citizens who don’t require a visa to enter the U.S. are exempt, and diplomatic and government visa holders.

Facial recognition data collected by the airlines on U.S. citizens is stored by Customs and Border Protection for between 12 hours and two weeks, and 75 years for non-citizens. That data is stored in several government databases, which border officials can pull up when you’re arriving or leaving the U.S.

Why should you opt-out? As an American, it’s your right to refuse. Homeland Security once said Americans who didn’t want their faces scanned at the airport should “refrain from traveling.” Now all it takes is a “no, thanks.”