The human race has broken another record on its race to ecological collapse. Congratulations humanity!

For the first time in human history — not recorded history, but since humans have existed on Earth — carbon dioxide in the atmosphere has topped 415 parts per million, reaching 415.26 parts per million, according to sensors at the Mauna Loa Observatory, a research outpost of the National Oceanic and Atmospheric Agency. 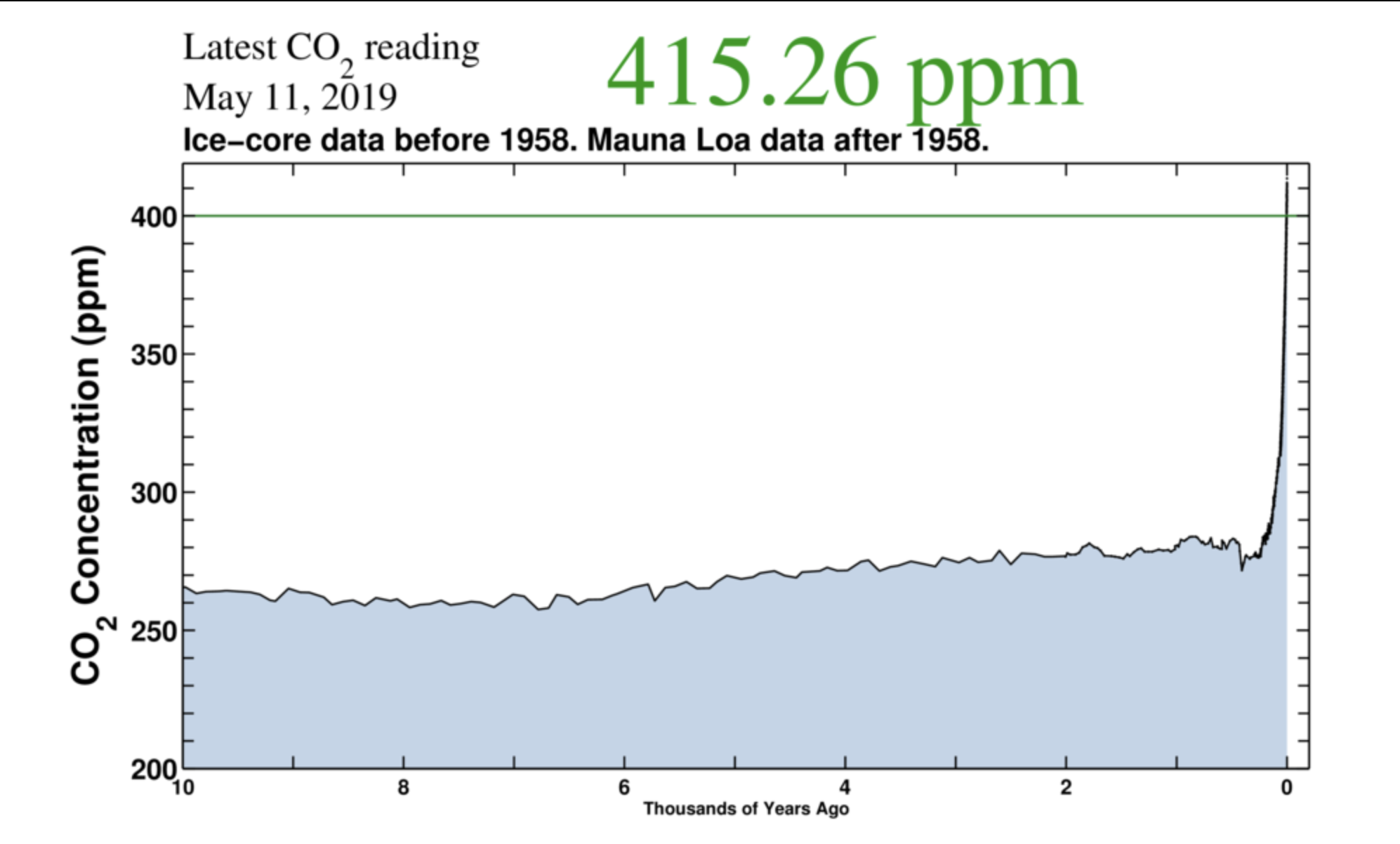 CO2 emissions over time as recorded by measurements of Arctic ice and the Mauna Loa Observatory. Courtesy of the Scripps Institution of Oceanography.

The macabre milestone was noted on Twitter by the climate reporter Eric Holthaus, based on the data recorded and presented by the Scripps Institution of Oceanography at the University of California, San Diego.

This is the first time in human history our planet's atmosphere has had more than 415ppm CO2.

Not just in recorded history, not just since the invention of agriculture 10,000 years ago. Since before modern humans existed millions of years ago.

If the threshold seems unremarkable (it shouldn’t), it’s yet another indication of the unprecedented territory humanity is now charting as it blazes new trails toward environmental catastrophe.

Just last week a report revealed that at least 1 million species were at risk of extinction thanks to human activity and the carbon emissions that are a byproduct of economic development.

That’s on top of news that climate change, which has been inextricably linked to carbon emissions, will cost the U.S. alone some $500 billion per year by 2090.

The increasing proportion of carbon dioxide in the atmosphere is important because of its heat absorbing properties. The land and seas on the planet absorb and emit heat, and that heat is trapped in carbon dioxide molecules. The NOAA likens CO2 to leaving bricks in a fireplace that still emit heat after a fire goes out.

Greenhouse gases contribute to the planet maintaining a temperature that can sustain life, but too much can impact the entire ecosystem that sustains us. That’s what’s happening now. As the NOAA notes, “increases in greenhouse gases have tipped the Earth’s energy budget out of balance, trapping additional heat and raising Earth’s average temperature.”

The properties of CO2 also mean that it adds to the greenhouse effect in a way that other emissions do not, thanks to its ability to absorb wavelengths of thermal energy that things like water vapor can’t. That’s why increases of atmospheric carbon dioxide are responsible for about two-thirds of the total energy imbalance causing Earth’s temperature to rise, according to the NOAA.