Asto, the Santander-owned “upstart” developing financial tools for freelancers and SMEs, is adding invoice financing to its bookkeeping app.

The new offering, which potentially opens up so-called “micro-financing” to a much broader business market, comes hot on the heels of Santander Group acquiring Albert, an invoicing and expenses app for freelancers and micro-businesses. Albert’s functionality has now been integrated into Asto, with Albert co-founder Ivo Weevers becoming Asto’s chief product and design officer.

In a call, Weevers described Asto’s mission as wanting to create a “full stack of financial services for self-employed people [and other micro businesses].” Financial services for SMEs is a “huge, fast-growing market,” he says, adding that “Asto is innovating on the bookkeeping side, [while] other players on the market are working on the bank account side.”

“A lot of people are struggling with trying to understand and get access to finances that might help them in growing their business or overcoming certain periods of their business where extra cash would be really handy,” he tells me.

“What we’re doing now is providing a comprehensive solution where we help people with their daily tasks around bookkeeping and understanding where they are financially, but also connecting dots seamlessly with a financial solution. This is what this new micro-financing solution is all about.” 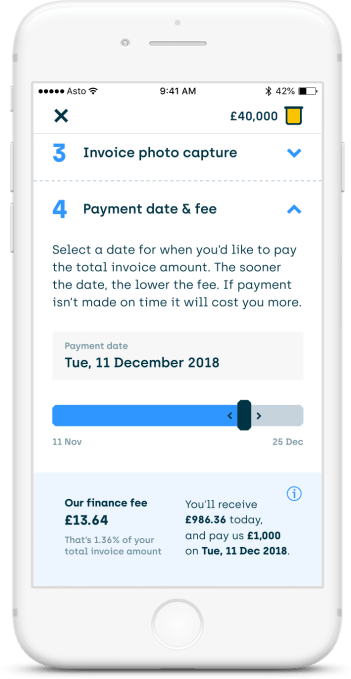 In a demo I’m given of the new invoice financing feature, it all feels relatively painless. After signing up to Asto and applying for the micro-finance option, you’re given an estimated pot of credit from which to drawn down on per invoice financed.

Invoices can be issued simply within the mobile app (or uploaded to it), which in itself is quite a time saver. Anyone who freelances knows that writing invoices and tracking them is a pain. Even more so is waiting to be paid.

Next to each invoice is a finance button. Clicking on it initiates the micro loan, with clear signposting on how much you’ll need to pay back and when. The time frame is based on the payment terms of your issued invoice with a bit of extra leeway if needed.

“Micro-financing used to be accessible only for the larger SMEs, people with financial knowledge and the time to go into a branch and talk to an account manager and wait for a few weeks to get a decision,” explains Weevers.

“One of the innovate steps we are trying to do here is we are making this option available for the smaller end of the SME market, which is by far the biggest and by far the most unserved. By doing it on mobile, which is their favourite device, and also doing it in a matter of minutes rather than having to wait for weeks,” he adds.

Meanwhile, I’m told that the credit itself is provided by Asto via owner Santander. Noteworthy is that the invoice financing feature doesn’t for the time being use transaction data pulled in from bank accounts you have linked to the app. Instead, Asto is using a range of other data points and info you provide when first applying for the micro-financing option.