The smartphone industry is in rough shape. Sundar Pichai used the word “headwinds” to discuss the company’s difficulties moving Pixel 3 units, but Canalys’ latest report is far more blunt, describing the situation as a “freefall.”

Things are pretty ugly in the Q1 report, as smartphone shipments declined for the sixth quarter in a row. The combined global units hit 313.9 million, marking their lowest point in almost half a decade, according to the firm.

Of the big players, Apple seems to be particularly hard hit, falling 23.2% year on year. Once again, China played a big role here, but as usual, the full story is much more complex.

“This is the largest single-quarter decline in the history of the iPhone,” said analyst Ben Stanton in a release tied to the news. “Apple’s second largest market, China, again proved tough. But this was far from its only problem. Shipments fell in the US as trade-in initiatives failed to offset longer consumer refresh cycles. In markets such as Europe, Apple is increasingly using discounts to prop up demand, but this is causing additional complexity for distributors, and blurring the value proposition of these ‘premium’ devices in the eyes of consumers.” 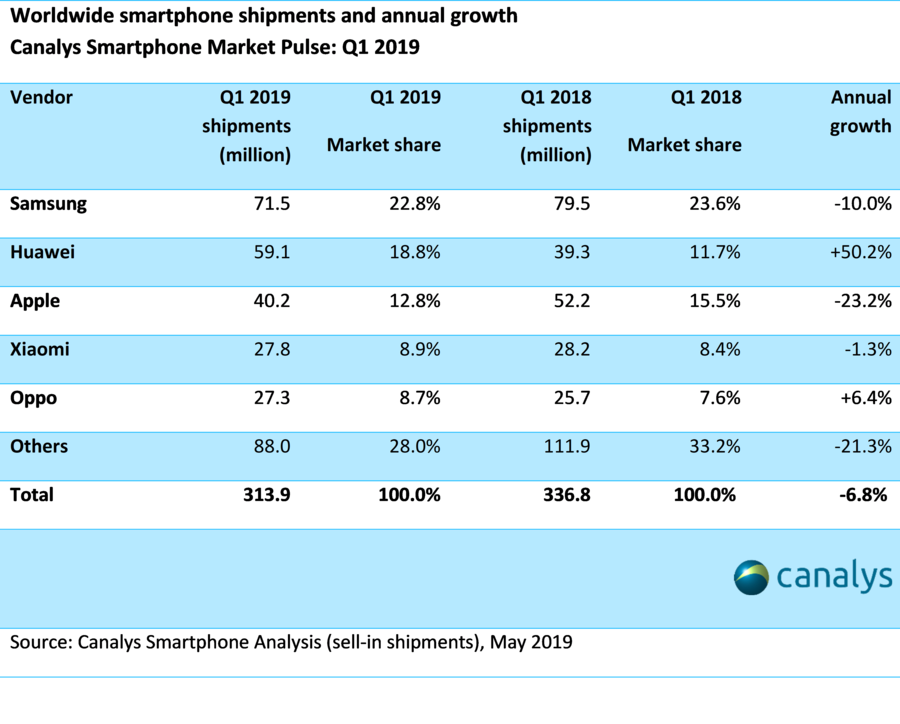 A lot to unpack there, but what we’re looking at are some larger issues within the industry, including global economic issues and slowed upgrade cycles for users. The XS was also notably much less dramatic of an upgrade than its predecessor. Stanton did add that the iPhone, “show[ed] signs of recovery towards the back-end of the quarter,” which is promising for Q2.

It also remains to be seen what this year will hold in terms of iPhone upgrades, though most signs point to 2020 as the year the company makes the jump to 5G. Tim Cook was noncommittal on the topic during the company’s earnings call last night, instead pointing to positive numbers on the iPad side and, of course, Apple’s continued push into services.

Analysts are somewhat bullish about the potential of innovations like 5G and even foldables in shaking up the stagnant market, but big players like Apple are clearly hedging their bets, should the free-falling headwinds continue.

Huawei, meanwhile, continues to be a bright spot, with a 50.2% year over year growth and an 18.8% global market share, according to the firm. That growth could be hampered, however, by increased competition from Samsung and fellow Chinese handset companies like Xiaomi and Oppo.