Jumbo could be a nightmare for the tech giants, but a savior for the victims of their shady privacy practices.

Jumbo saves you hours as well as embarrassment by automatically adjusting 30 Facebook privacy settings to give you more protection, and by deleting your old tweets after saving them to your phone. It can even erase your Google Search and Amazon Alexa history, with clean-up features for Instagram and Tinder in the works.

The startup emerges from stealth today to launch its Jumbo privacy assistant app on iPhone (Android coming soon). What could take a ton of time and research to do manually can be properly handled by Jumbo with a few taps. 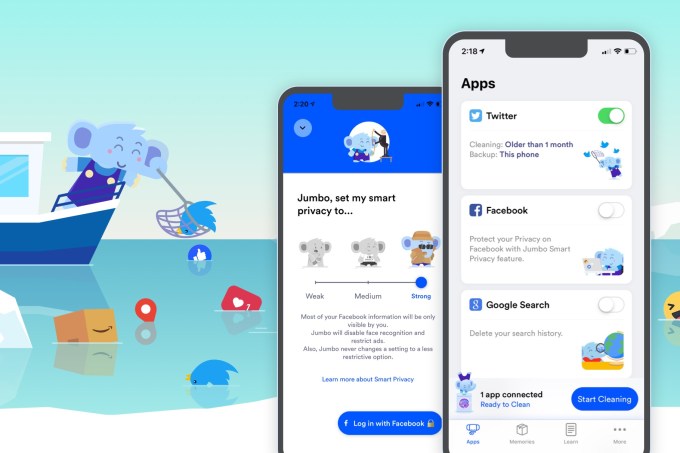 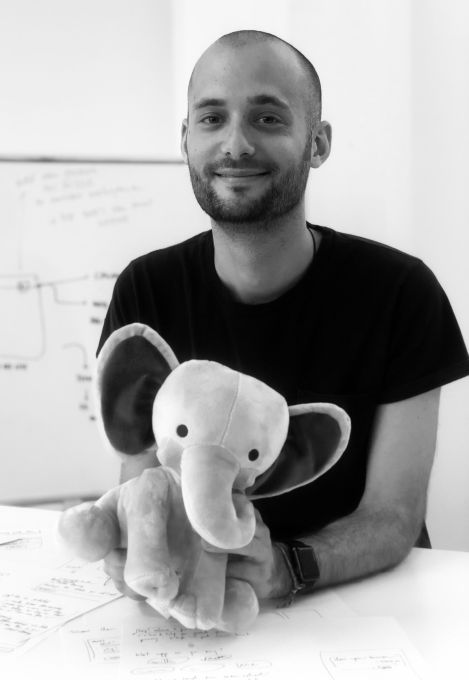 The question is whether tech’s biggest companies will allow Jumbo to operate, or squash its access. Facebook, Twitter and the rest really should have built features like Jumbo’s themselves or made them easier to use, since they could boost people’s confidence and perception that might increase usage of their apps. But since their business models often rely on gathering and exploiting as much of your data as possible, and squeezing engagement from more widely visible content, the giants are incentivized to find excuses to block Jumbo.

“Privacy is something that people want, but at the same time it just takes too much time for you and me to act on it,” explains Jumbo founder Pierre Valade, who formerly built beloved high-design calendar app Sunrise that he sold to Microsoft in 2015. “So you’re left with two options: you can leave Facebook, or do nothing.”

Jumbo makes it easy enough for even the lazy to protect themselves. “I’ve used Jumbo to clean my full Twitter, and my personal feeling is: I feel lighter. On Facebook, Jumbo changed my privacy settings, and I feel safer.” Inspired by the Cambridge Analytica scandal, he believes the platforms have lost the right to steward so much of our data.

Valade’s Sunrise pedigree and plan to follow Dropbox’s bottom-up freemium strategy by launching premium subscription and enterprise features has already attracted investors to Jumbo. It’s raised a $3.5 million seed round led by Thrive Capital’s Josh Miller and Nextview Ventures’ Rob Go, who “both believe that privacy is a fundamental human right,” Valade notes. Miller sold his link-sharing app Branch to Facebook in 2014, so his investment shows those with inside knowledge see a need for Jumbo. Valade’s six-person team in New York will use the money to develop new features and try to start a privacy moment.

First let’s look at Jumbo’s Facebook settings fixes. The app asks that you punch in your username and password through a mini-browser open to Facebook instead of using the traditional Facebook Connect feature. That immediately might get Jumbo blocked, and we’ve asked Facebook if it will be allowed. Then Jumbo can adjust your privacy settings to Weak, Medium, or Strong controls, though it never makes any privacy settings looser if you’ve already tightened them.

Valade details that since there are no APIs for changing Facebook settings, Jumbo will “act as ‘you’ on Facebook’s website and tap on the buttons, as a script, to make the changes you asked Jumbo to do for you.” He says he hopes Facebook makes an API for this, though it’s more likely to see his script as against policies. 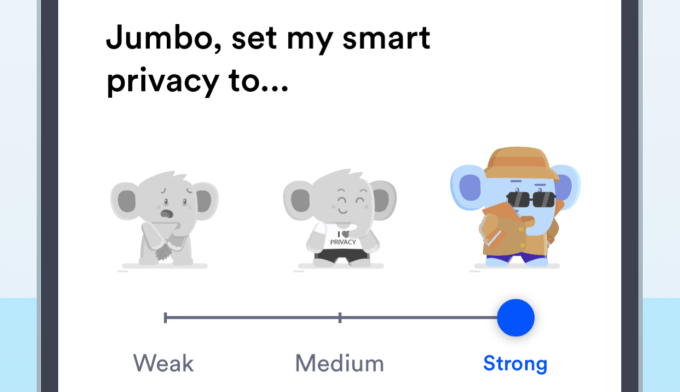 For example, Jumbo can change who can look you up using your phone number to Strong – Friends only, Medium – Friends of friends, or Weak – Jumbo doesn’t change the setting. Sometimes it takes a stronger stance. For the ability to show you ads based on contact info that advertisers have uploaded, both the Strong and Medium settings hide all ads of this type, while Weak keeps the setting as is.

For Twitter, you can choose if you want to remove all tweets ever, or that are older than a day, week, month (recommended), or three months. Jumbo never sees the data, as everything is processed locally on your phone. Before deleting the tweets, it archives them to a Memories tab of its app. Unfortunately, there’s currently no way to export the tweets from there, but Jumbo is building Dropbox and iCloud connectivity soon, which will work retroactively to download your tweets. Twitter’s API limits mean it can only erase 3,200 tweets of yours every few days, so prolific tweeters may require several rounds.

Its other integrations are more straightforward. On Google, it deletes your search history. For Alexa, it deletes the voice recordings stored by Amazon. Next it wants to build a way to clean out your old Instagram photos and videos, and your old Tinder matches and chat threads.

Across the board, Jumbo is designed to never see any of your data. “There isn’t a server-side component that we own that processes your data in the cloud,” Valade says. Instead, everything is processed locally on your phone. That means, in theory, you don’t have to trust Jumbo with your data, just to properly alter what’s out there. The startup plans to open source some of its stack to prove it isn’t spying on you.

While there are other apps that can clean your tweets, nothing else is designed to be a full-fledged privacy assistant. Perhaps it’s a bit of idealism to think these tech giants will permit Jumbo to run as intended. Valade says he hopes if there’s enough user support, the privacy backlash would be too big if the tech giants blocked Jumbo. “If the social network blocks us, we will disable the integration in Jumbo until we can find a solution to make them work again.”

But even if it does get nixed by the platforms, Jumbo will have started a crucial conversation about how privacy should be handled offline. We’ve left control over privacy defaults to companies that earn money when we’re less protected. Now it’s time for that control to shift to the hands of the user.