Within a month, McClure was removed from the accelerator after admitting to sexual misconduct and 500 Startups started reckoning with the ramifications of his actions.

Over the course of 2018, 500 saw some successes among its international operations, ending the year with $454 million committed across multiple funds, according to the company’s chief executive, Christine Tsai. The firm’s international operations kept humming with 500 Vietnam raising $14 million in an oversubscribed close and the Southeast Asian-focused fund, 500 TukTuks II, holding their initial close.

Now, with its oversubscribed close of $33 million, 500 Falcons joins the ranks of geographically focused, 500-affiliated investment firms to raise capital as the firm’s scandal recedes from view.

In the intervening years since the launch of 500 Falcons and the fund’s final close, the argument for investing in the Middle East and North Africa has only become more clear.

The trend-line for investments in the Middle East continues to move up and to the right. Last year there were 366 investments made in Middle Eastern startups — the highest number on record. And those deals managed to raise 31 percent more than their 2017 total, with $893 million in capital committed, according to the region’s industry tracker, Magnitt. 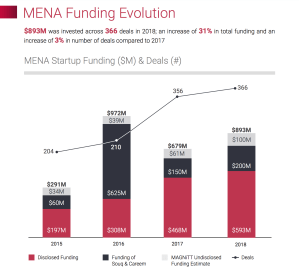 Earlier this morning, Uber added a $3.1 billion rationale for Middle East investors with its acquisition of the regional ride-hailing service, Careem.

The region’s potential for growth was even mentioned in the statement from Careem’s chief executive and co-founder, Mudassir Sheikha, when he discussed the acquisition.

“Joining forces with Uber will help us accelerate Careem’s purpose of simplifying and improving the lives of people, and building an awesome organisation that inspires,” he said. “The mobility and broader internet opportunity in the region is massive and untapped, and has the potential to leapfrog our region into the digital future.”

The 500 Falcons fund has also seen more modest successes of its own.

One portfolio company, the Dubai-based transcription and note-taking service Wrappup, was acquired by Voicera for an undisclosed amount. And the firm has seen follow-on funding for its portfolio companies Souqalmal, a price comparison site for consumer lending and insurance; Jamalon, the region’s largest online retailer of Arabic and English books; and Foodics, a point of sale system for restaurants.

In all, the firm has invested in 105 startups since its launch.

From its inception, the 500 Falcons fund has taken a holistic approach to investing in the region, according to Haider.

“The region has long faced political and economic uncertainty, and a growing younger population that is looking to take charge and change things with their own hands. These youth have access to the same global wealth of information as anyone else. If they so choose, they’re capable of achieving the same things anyone else in the world is,” Haider wrote in 2017.

“The Middle East and North Africa are among the last large regional ecosystems to rise up, and emerging markets tend to leapfrog adoption of innovations and technology at higher and higher frequencies. Being a latecomer does not mean staying behind, and the Arabic speaking world is 500 million strong – young, resourceful, wealthy and a yearning to thrive.”