Solugen, a startup that has set itself up with no less lofty a goal than the decarbonization of a massive chunk of the petrochemical industry, may be the first legitimate multi-million-dollar company to start out in a meth lab.

When company co-founders Gaurab Chakrabarti and Sean Hunt began hunting for a lab to test their process for enzymatically manufacturing hydrogen peroxide, they only had a small $10,000 grant from MIT — which was supposed to pay their salaries and cover rent and lab equipment.

Chakrabarti, who now jokingly calls himself “the Heisenberg of hydrogen peroxide,” says that the lab spaces they looked at initially were all too pricey, so through a friend of a friend of a friend, he and Hunt wound up leasing lab space in a facility near the Houston airport for $150 per month.

It was there among the burners and round-bottomed flasks that Hunt and Chakrabarti refined their manufacturing process — using fermentation based on Solugen’s proprietary enzyme made from genetically modified yeast cells to produce hydrogen peroxide.

“In 2016 I went to visit Solugen’s headquarters in Houston. They were subleasing a small part of a bigger lab and it was one of the sketchiest labs I’d seen, but the Solugen founders liked it because the rent was low,” recalls Solugen seed investor Seth Bannon, a founding partner with the investment firm Fifty Years. “Sean and Gaurab were incredibly impressive. They had their prototype reactor up and running and were already selling 100 percent of its capacity, so we invested.”

Creating a process that can make thousands of tons of chemicals — without relying on petroleum — would be a hugely important step in the fight against global climate change. And Solugen says it has done exactly that — while getting the chemical industry to subsidize its development.

The chemicals industry is responsible for 10 percent of global energy consumption and 30 percent of industrial energy demand, while also contributing 20 percent of all industrial greenhouse gas emissions, according to the website Global Efficiency Intelligence.

As the world begins to confront the effects of global climate change, curbing emissions from industry will be critically important to ensuring that the world is not irrevocably and catastrophically changed by human activity.

Our hardest climate problems – the ones that are both large and lack obvious solutions – are agriculture (and deforestation – its major side effect) and industry. Together these are 45% of global carbon emissions. And solutions are scarce.

Agriculture and land use account for 24% of all human emissions. That’s nearly as much as electricity, and twice as much all the world’s passenger cars combined.

Industry – steel, cement, and manufacturing – account for 21% of human emissions – one and a half times as much as all the world’s cars, trucks, ships, trains, and planes combined. 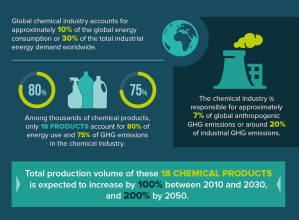 Greenhouse gas emissions are only one of the dangers associated with the petrochemical industry’s approach to production. The processes by which chemicals are made are also incredibly volatile, and the work is dangerous for both employees and the communities in which these plants operate.

Last week, a chemical plant explosion in Houston led to one of the worst fires in the city’s history. Firefighters in the city spent six days trying to contain a chemical fire that burned 11 storage tanks managed by Intercontinental Terminals Company.

“They’re moving chemicals exposed to the environment, and those chemicals are not designed to be transported in that way,” Francisco Sanchez, the county’s deputy emergency management coordinator told The Houston Chronicle. 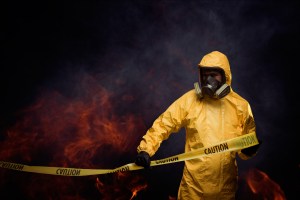 By contrast, Solugen’s process is only a little more dangerous than brewing beer.

In the years since Bannon came to visit the company in its first lab, Solugen has built a working production plant capable of making enough hydrogen peroxide to bring in tens of millions of dollars in revenue for the company.

In addition to its current mobile manufacturing facility, a skid-mounted 1,000-square-foot mini plant, Solugen is using $13.5 million in new financing from investors to build a new, 2,500-square-foot modular facility that will produce 5,000 tons of hydrogen peroxide per year.

Solugen’s secret sauce is its ability to create oxidase enzymes cheaply that can be combined with simple sugars to make oxidation chemicals — which account for roughly half of the $4.3 trillion global chemical industry.

The company’s bioreactors have been specifically designed for the chemicals it makes, but the real innovation is looking at enzymes as a tool for oxidation chemistries.

Companies are now able to engineer these enzymes thanks to advances in computational biology and the newfound ability of biochemists to engineer DNA, Chakrabarti says.

Solugen uses CRISPR gene editing technologies to modify yeast cells. It has identified a certain transcription factor that acts like an accelerant to produce the enzyme that Solugen’s process requires. Messenger ribonucleic acid overwhelms most of the typical processes of a cell to force the cell to dedicate most of its function toward enzyme production. The company then uses a contract research organization to cheaply make the enzyme at scale.

Companies also have driven down the cost of manufacturing these specialty enzymes. “The revolution is the commoditization of biomanufacturing, specifically enzyme production,” Chakrabarti says. “Instead of our enzymes costing $1,000 per kg… It’s $1 to $10 per kg.”

Once Solugen proves that the new facility can work, the only issue is scaling, according to Chakrabarti. “We use enzyme technologies to create chemical mini-mills [and] each mini-mill can do 5,000 tons of products,” says Chakrabarti.

A typical chemical plant has a production capacity of 50,000 tons, but the Solugen process is orders of magnitude more inexpensive, says Chakrabarti. That allows the company to build out a network of smaller plants profitably. “These are huge industries where we can make cheaper products,” he says.

And for every ton of product that Solugen makes and sells, it’s the equivalent of removing six tons of carbon from the atmosphere, Chakrabarti says.

Oil and gas companies have already signed contracts and are ordering the company’s products to the tune of several million in sales.

“It’s a nice way of funding us and funding the oil and gas industry’s demise,” says Chakrabarti of the company’s sales to its initial customers, “They give us money and allow us to go after other chemistries that would have been petroleum-based… Our ultimate goal is to wipe them out.”