Heathcare kiosks, a home-cooked food marketplace, and a way for startups to earn interest on their funding topped our list of high-potential companies from Y Combinator’s Winter 2019 Demo Day 2. 88 startups launched on stage at the lauded accelerator, though some of the best skipped the stage as they’d already raised tons of money.

Be sure to check out our write-ups of all 85 startups from day 1 plus our top picks, as well as the full set from day 2. But now, after asking investors and conferring with the TechCrunch team, here are our 9 favorites from day 2.

Two months ago, California passed the first law in the country legalizing the sale of home cooked food. Shef creates a marketplace where home chefs can find nearby customers. Shef’s meals cost around $6.50 compared to $20 per meal for traditional food delivery, and the startup takes a 22 percent cut of every transaction. It’s been growing 50 percent week over week thanks to deals with large property management companies that offer the marketplace as a perk to their residents. Shef wants to be the Airbnb of home cooked food.

Why we picked Shef: Deregulation creates gold rush opportunities and Shef was quick to seize this one, getting started just days after the law passed. Food delivery is a massive megatrend but high costs make it unaffordable or a luxury for many. If a parent is already cooking meals for their whole family, it takes minimal effort to produce a few extra portions to sell to the neighbors at accessible rates.

This startup automates the collection process of unpaid construction invoices. Construction companies are often forced to pay for their own jobs when customers are late on payments. According to Handle, there are $104 billion in unpaid construction invoices every year. Handle launched six weeks ago and is currently collecting $22,800 in monthly revenue. The founders previously launched an Andreessen Horowitz-backed company called Tenfold.

Why we picked Handle: Construction might seem like an unsexy vertical, but it’s massive and rife with inefficiencies this startup tackles. Handle helps contractors demand payments, instantly file liens that ensure they’re compensated for work or materials, or exchange unpaid invoices for cash. Even modest fees could add up quickly given how much money moves through the industry. And there are surely secondary business models to explore using all the data Handle collects on the construction market. This pediatric telemedicine company provides medical care instantly to families. Blueberry provides constant contact, the ability to talk to a pediatrician 24/7 and at-home testing kits for a total of $15 per month. They’ve just completed a paid consumer pilot and say they were able to resolve 84 percent of issues without in-person care. They’ve partnered with insurance providers to reduce ER visits.

Why we picked Blueberry: Questionable emergency room visits are a nightmare for parents, a huge source of unnecessary costs, and a drain on resources for needy patients. Parents already spend so much time and money trying to keep their kids safe that this is a no-brainer subscription. And the urgent and emotional pull of pediatrics is a smart wedge into telemedicine for all demographics. 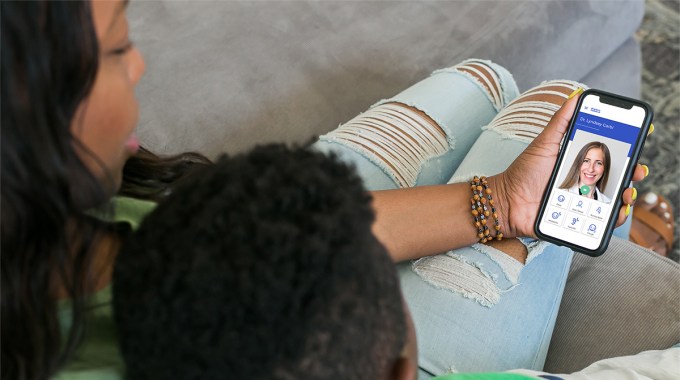 Led by a team of YC alums behind Raven, an AI startup acquired by Baidu in 2017, rct studio is a creative studio for immersive and interactive film. The platform provides a real time “text to render “engine (so the text “A man sits on a sofa” would generate 3D imagery of a man sitting on a sofa) that supports mainstream 3D engines like Unity and Unreal, as well as a creative tool for film professionals to craft immersive and open-ended entertainment experiences called Morpheus Engine.

Why we picked rct studio: Netflix’s Bandersnatch was just the start of mainstream interactive film. With strong technology, an innovative application, and proven talent, rct could become a critical tool for creating this kind of media. And even if the tech falls short of producing polished media, it could be used for storyboards and mockups. 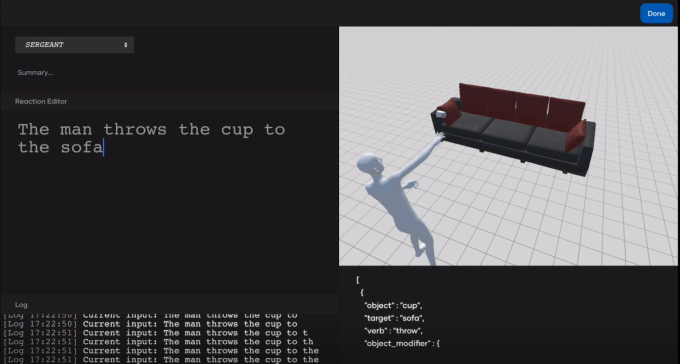 Provides “Apple level” treasury services to startups. Startups are raising a lot of money with no way to manage it, says Interprime. They want to help these businesses by managing these big investments by helping them earn interest on their funding while retaining liquidity. They take a .25 percent advisory fee for all the investment they oversee. So far, they have $10 million in investment capital they are servicing.

Why we picked Interprime: The explosion of early stage startup funding evidenced by Y Combinator itself has created new banking opportunities. Silicon Valley Bank is ripe for competition and Interprime’s focus on startups could unlock new financial services. With Interprime’s YC affiliation, it has access to tons of potential customers. 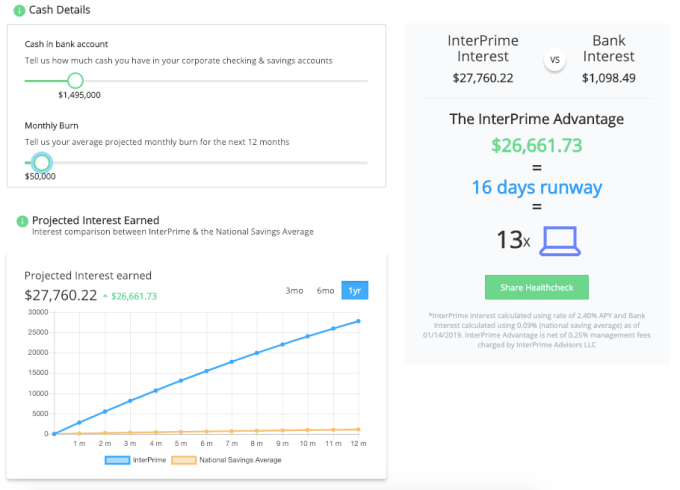 Nabis is tackling the cannabis shipping and logistics business, working with suppliers to ship out goods to retailers reliably. It’s illegal for FedEx to ship weed so Nabis has swooped in and is helping ship and connect while taking cuts of the proceeds, a price the suppliers are willing to pay due to their 98 percent on-time shipping record.

Why we picked Nabis: Quirky regulation creates efficiency gaps in the marijuana business where incumbents can’t participate since they’re not allowed to handle the flower. As more states legalize and cannabis finds its way into more products, moving goods from farm to processor to retailer could spawn a big market for Nabis with a legal moat. It’s already working with many top marijuana brands, and could sell them additional services around business intelligence and distribution. 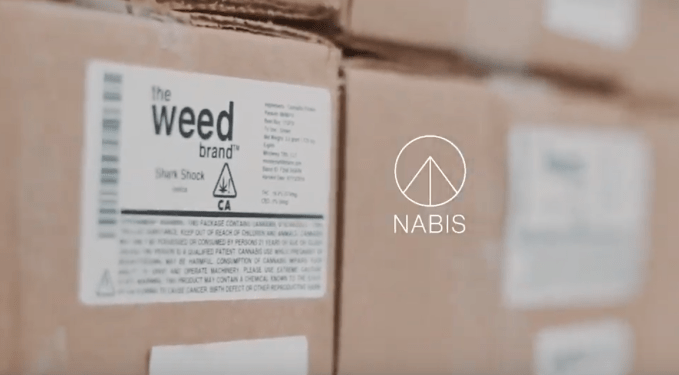 This startup measures weather damage for insurance companies. WeatherCheck has secured $4.7 million in annual bookings in the five months since it launched to help insurance carriers reduce their overall claims expense. To use the service, insurers upload data about their properties. WeatherCheck then monitors the weather and sends notifications to insurance companies, if, for example, a property has been damaged by hail.

Why we picked WeatherCheck: Extreme weather is only getting worse due to climate change. With 10.7 million US properties impacted by hail damage in 2017, WeatherCheck has found a smart initial market from which to expand. It’s easy to imagine the startup working on flood, earthquake, tornado, and wildfire claims too. Insurance is a fierce market, and old-school providers could get a leg up with WeatherCheck’s tech. 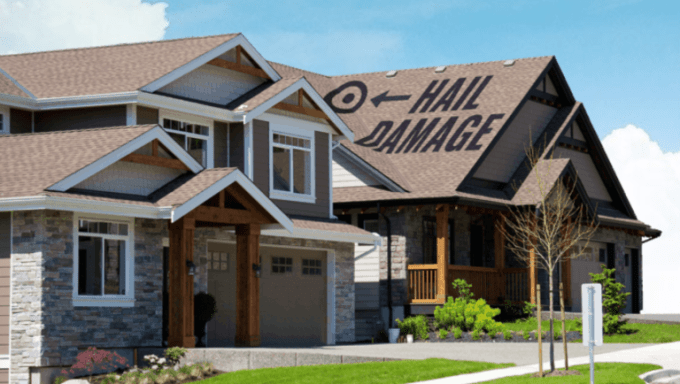 Upsolve wants to help low-income individuals file for bankruptcy more easily. The non-profit service gets referral fees from pointing non low-income families to bankruptcy lawyers and is able to offer the service for free. The company says that medical bills, layoffs and predatory loans can leave low-income families in dire situations and that in the last 6 months, their non-profit has alleviated customers from $24 million in debt.

Why we picked Upsolve: Financial hardship is rampant. With the potential for another recession and automation threatening jobs, many families could be at risk for bankruptcy. But the process is so stigmatized that some people avoid it at all costs. Upsolve could democratize access to this financial strategy while inserting itself into a lucrative transaction type. 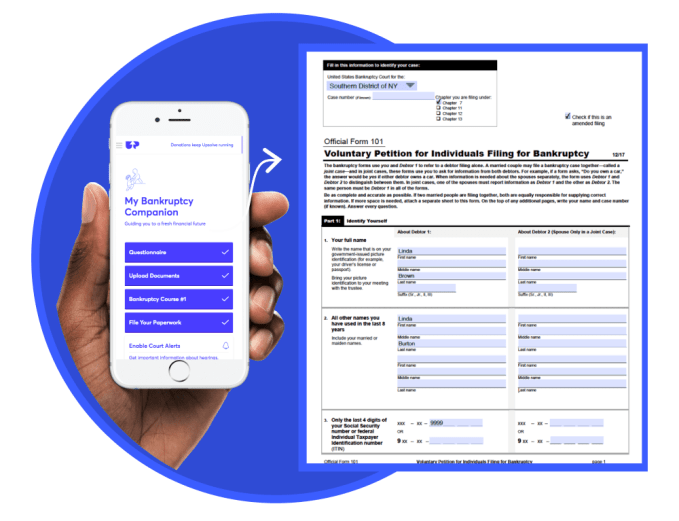 This startup makes health kiosks for India, meant to be installed in train stations. Co-founder Joginder Tanikella says that there are 600,000 preventable deaths in India as many in the region don’t get regular doctor checkups. “But everyone takes trains,” he says. Their in-station kiosk measures 21 health parameters. The company made $28,000 in revenue last month. Charging $1 per test, Tanikella says each machine pays for itself within 3 months. In the future, the kiosks will allow them to sell insurance and refer users to doctors.

Why we picked Pulse: Telemedicine can’t do everything, but plenty of people around the world can’t make it in to a full-fledged doctor’s office. Pulse creates a mid-point where hardware sensors can measure body fat, blood pressure, pulse, and bone strength to improve accuracy for diagnosing diabetes, osteoarthritis, cardiac problems, and more. Pulse’s companion app could spark additional revenue streams, and there’s clearly a much bigger market for this than just India. 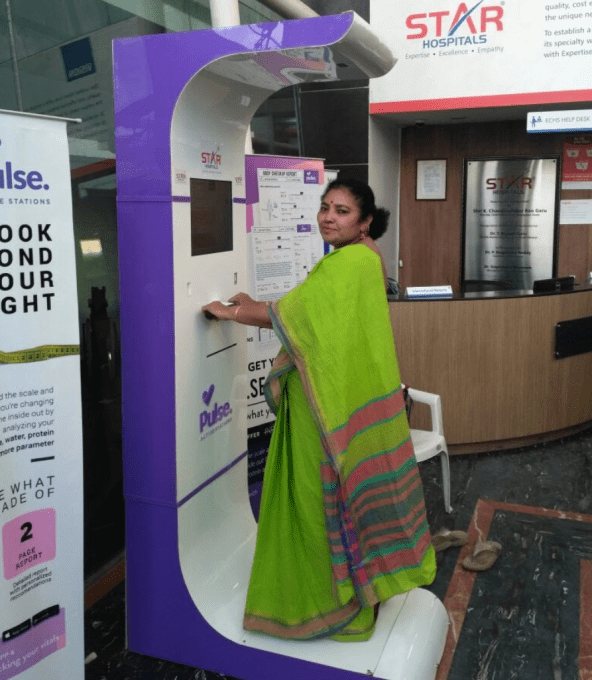 -Allo, a marketplace where parents can exchange babysitting and errand-running