China’s Tencent reported disappointing profits in the fourth quarter on the back of surging costs but saw emerging businesses pick up steam as it plots to diversify amid slackening gaming revenues.

Net profit for the quarter slid 32 percent to 14.2 billion yuan ($2.1 billion), behind analysts’ forecast of 18.3 billion yuan. The decrease was due to one-off expenses related to its portfolio companies and investments in non-gaming segments like video content and financial technology.

Excluding non-cash items and M&A deals, Tencent’s net profit from the period rose 13 percent to 19.7 billion yuan ($2.88 billion). The company has to date invested in more than 700 companies, 100 of which are valued over $1 billion each and 60 of which have gone public. 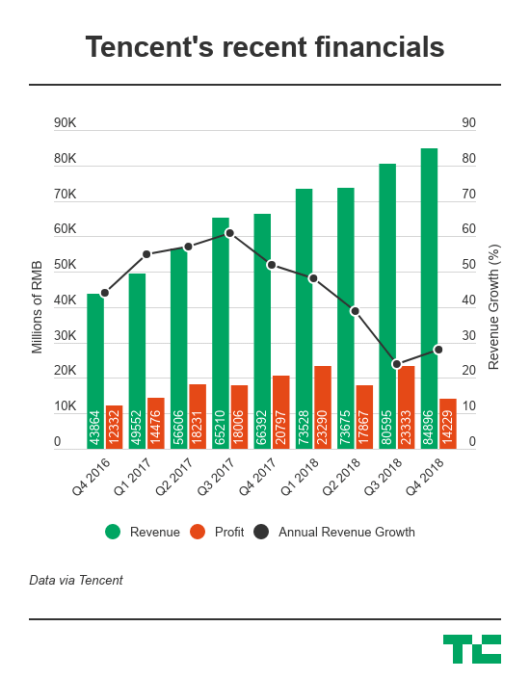 The Hong Kong-listed company is best known for its billion-user WeChat messenger but had for years relied heavily on a high-margin gaming business. That was until a months-long freeze on games approvals last year that delayed monetization for new titles, spurring a major reorg in the firm to put more focus on enterprise services, including cloud computing and financial technology.

Tencent has received approvals for eight games since China resumed the licensing process, although its blockbusters PlayerUnknown Battlegrounds and Fortnite have yet to get the green light. The firm also warned of a “sizeable backlog” for license applications in the industry, which means its “scheduled game releases will initially be slower than in some prior years.”

Video games for the quarter contributed 28.5 percent of Tencent’s total revenues, compared to 36.7 percent in the year-earlier period. Despite the domestic fiasco, Tencent remains as the world’s largest games publisher by revenue, according to data compiled by NewZoo. The firm has also gotten more aggressive in taking its titles global.

Social network revenues rose 25 percent on account of growth in live streaming and video subscriptions. The segment made up 22.9 percent of total revenues. Tencent has in recent years spent heavily on making original content and licensing programs as it competes with Baidu’s iQiyi video streaming site. Tencent claimed 89 million subscribers in the latest quarter, compared with iQiyi’s 87.4 million.

Tencent has been relatively slow to monetize WeChat in contrast to its western counterpart Facebook, though it’s under more pressure to step up its game. Tencent’s advertising revenue from the quarter grew 38 percent thanks to expanding advertising inventory on WeChat. Ads accounted for 20 percent of the firm’s quarterly revenues.

All told, WeChat and its local version Weixin reached nearly 1.1 billion monthly active users; 750 million of them checked their friends’ WeChat feeds, and Tencent recently introduced a Snap Story-like feature to lock users in as it vies for eyeball time with challenger TikTok.

Meanwhile, cloud revenues doubled to 9.1 billion yuan in 2018, thanks to Tencent’s dominance in the gaming sector as its cloud infrastructure now powers over half of the China-based games companies and is following these clients overseas. Tencent meets Alibaba head-on again in the cloud sector. For comparison, Alibaba’s most recent quarterly cloud revenue was 6.6 billion yuan. Just yesterday, the e-commerce leader claimed that its cloud business is larger than the second to eight players in China combined.