Every time a visitor experiences an issue on your website, it’s going to have an impact on their impression of the company. That’s why companies want to resolve issues in a timely manner. LogRocket, a Cambridge, Mass. startup, announced an $11 Million Series A investment today to give engineering and web development teams access to more precise information they need to fix issues faster.

The round was led by Battery Ventures with participation from seed investor Matrix Partners. When combined with an earlier unannounced $4 million seed round, the company has raised of total of $15 million.

The two founders, Matthew Arbesfeld and Ben Edelstein, have been friends since birth, growing up together in the Boston suburbs. After attending college separately at MIT and Columbia, the two friends both moved to San Francisco where they worked as engineers building front-end applications.

The company idea grew from the founders’ own frustration tracking errors. They found that they would have to do a lot of manual research to find problems, and it was taking too much time. That’s where they got the idea for LogRocket.

“What LogRocket does is we capture a recording in real time of all the user activity so the developer on the other end can replay exactly what went wrong and troubleshoot issues faster,” Arbesfeld explained. 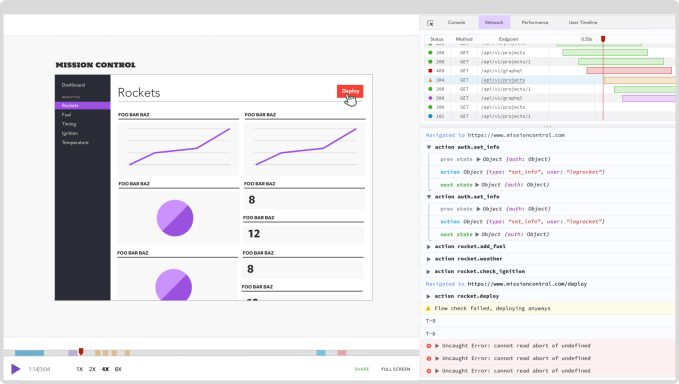 The tool works by capturing HTML and CSS code of troublesome activity of each user and putting them together in a video. When there is an error or problem, the engineer can review the video and watch exactly what the user was doing when he or she encountered an error, allowing them to identify and resolve the problem much more quickly.

Arbesfeld said the company doesn’t actually have to store video because it is capturing code related to problems instead of the entire experience. “We’re looking at frustrating moments of the user, so that we can focus on the problem areas,” he explained.

Customers can access the data in the LogRocket dashboard, or it can be incorporated into help desk software like Zendesk. The company is growing quickly, with 25 employees and 500 customers in just 18 months since inception, including Reddit, Ikea and Bloomberg.

As for the funding, they see this as the start of a long-term journey. “Our goal is to get out to a much wider audience and build a mature sales and marketing organization,” Arbesfeld said. He sees a future with thousands of customers and ambitious revenue goals. “We want to continue to use the data we have to offer more proactive insights into highest impact problems,” he said.