To prevent its own Cambridge Analytica moment and make sure it’s getting paid for its data, Twitter will audit developers using its APIs. Starting June 19th, Twitter will require developers of any app that calls recent tweets from or mentions a user more than 100,000 times per day to submit their app for review.

If a developer proves they have a legitimate consumer use case, like running a third-party Twitter client or doing research, they’ll be granted free access to the API at the same rate they have today. If they primarily use the data to serve business customers as a B2B tool, like for customer service or social media monitoring, they’ll have to pay to enter a commercial licensing agreement with Twitter with a custom price based on usage. Twitter refused to even specify the range those prices fall into, which won’t win it any extra trust.

Developers found to be breaking Twitter’s policies will be booted from the platform, while those that don’t submit for review will be capped at 100,000 requests per day for the user timeline and mentions APIs. Twitter says it suspended 162,000 apps in the second half of 2018, showing it’s willing to play hardball with developers that endanger its ecosystem. 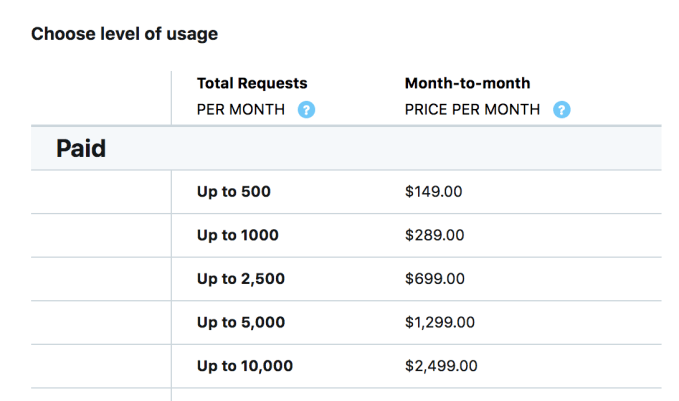 The goal is “ensuring that our platform is safe and promoting the privacy and safety of our users, and providing a level playing field commercially,” Twitter’s head of site integrity Yoel Roth tells me. “We’re fundamentally different than other platforms that have APIs since almost everything that happens on our service is public. That doesn’t mean we don’t have a deep responsibility to our users.”

This is the second big platform safety move Twitter has made after last year requiring all new developers who sign up to have their use cases reviewed, and get white-listed if they publish more content to Twitter than a normal person could. But that still left all the old developers without proper oversight, which will change in June.

In the past, Twitter has thrashed developers with whiplash by suddenly changing its API policies. That led apps to break, businesses to fold and a perception of Twitter as an unreliable or even hostile place for developers to build. This time, Twitter is giving developers a three-month heads-up to minimize surprise and problems. At a time when developers are becoming increasingly suspicious of Facebook, treating them better so they keep building bonus experiences is a smart move for Twitter.