Factory software tools are often out of reach of small manufacturers, forcing them to operate with inefficient manual systems. WorkClout, a member of the Y Combinator Winter 2019 class, wants to change that by offering a more affordable SaaS alternative to traditional manufacturing software solutions.

Company co-founder and CEO Arjun Patel grew up helping out in his Dad’s factory and saw first-hand how difficult it is for small factory owners to automate. He says that traditional floor-management tools are expensive and challenging to implement.

“What motivated me is when my dad was trying to implement a similar system,” Patel said, noting that his father’s system had cost more than $240,000, took over a year to get going and wasn’t really doing what he wanted it to do. That’s when he decided to help.

He teamed up with Bryan Trang, who became the CPO, and Richard Girges, who became the CTO, to build the system that his dad (and others in a similar situation) needed. Specifically, the company developed a cloud software solution that helps manufacturers increase their operational efficiency. “Two things that we do really well is track every action on the factory floor and use that data to make suggestions on how to increase efficiency. We also determine how much work can be done in a given time period, taking finite resources into consideration,” Patel explained.

He said that one of the main problems that small-to-medium sized manufacturers face is a lack of visibility into their businesses. WorkClout looks at orders, activities, labor and resources to determine the best course of action to complete an order in the most cost-effective way.

“WorkClout gives our customers a better way to allocate resources and greater visibility of what’s actually happening on the factory floor. The more data that they have, the more accurate picture they have of what’s going on,” Patel said. 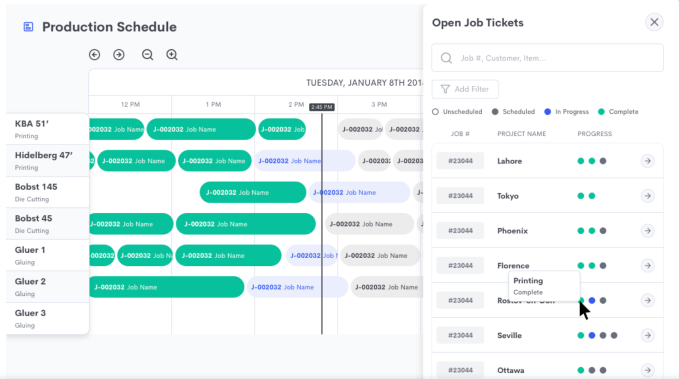 The company is still working on the pricing model, but today it charges administrative users like plant management, accounting and sales. Machine operators get access to the data for free. The current rate for paid users starts at $99 per user per month. There is an additional one-time charge for implementation and training.

As for the Y Combinator experience, Patel says that it has helped him focus on what’s important. “It really makes you hone in on building the product and getting customers, then making sure those two things are leading to customer happiness,” he said.

While the company does have to help customers get going today, the goal is to make the product more self-serve over time as they begin to understand the different verticals for which they are developing solutions. The startup launched in December and already has 13 customers, generating $100,000 in annual recurring revenue (ARR), according to Patel.