After SoftBank announced its plans to launch a $5 billion innovation fund in Latin America, we reached out to the good folks at the Latin American Venture Capital Association (LAVCA) for some context, and what they told me only validates the reasoning behind SoftBank’s interest in the region. (In 2017, we reported on the growing interest in Latin America.)

Let’s start with some numbers. Venture funding in Latin American startups is up — way up — from previous years. Specifically, LAVCA’s data shows that VC funding more than doubled in 2017 to $1.14 billion compared to $500 million in 2016. While 2018 numbers haven’t been finalized, LAVCA is projecting another record year with venture investments topping $1.5 billion. 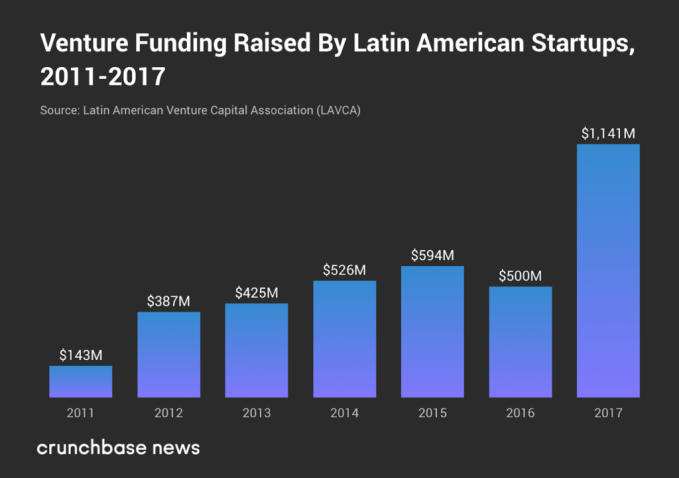 If you combine private equity and venture investing, the numbers are even more impressive. LAVCA estimates that PE and VC fundraising together in Latin America in 2017 totaled $4.3 billion, up from $2.3 billion in 2016.1

Julie Ruvolo, director of venture capital for LAVCA, said all this “fits squarely in this larger momentum that’s been building over the last year or two.”

“We’ve been seeing the continued, and increased, entry of significant global players in the market,” she told Crunchbase News. “Plus, we’ve been seeing an uptick in $100 million-plus rounds, which was a relatively rare thing in Latin America.”

Also unsurprising is the breakdown of where the majority of venture dollars have gone in Latin America. Brazil led the region across all stages of VC investment, capturing 73 percent of VC investment dollars in 2017 and the first half of 2018 (201 startup investments totaling $1.4 billion). Mexico was the second most active market by number of deals (82 startup investments totaling $154 million), but Colombia saw more money invested ($188 million over 23 deals).

Here’s a quick rundown of just some of the bigger deals that took place during that same time frame:

With all this innovation and investing going on in Latin America, there is clearly large potential. And SoftBank is now poised to capitalize on that.