Recently, we bore out with data what has been felt for several years in most U.S. tech scenes: a rising venture market raises funds of all sizes. But it’s a trend that most favors entrenched firms, which raise ever-larger funds to accommodate a shift in the startup life cycle. Private companies are dawdling at the exit door, postponing graduation to public markets because private-market money is cheap and plentiful, for now.

In a time when “blitzscaling” is the business strategy du jour, some high-growth companies raise supergiant nine and 10-figure VC rounds to help them build moats around walled-garden markets they’re trying to build up from both sides, or they’ll die trying.

This is all to point out that, at the high end of the assets-under-management (AUM) spectrum, fund size has ballooned. This nets the biggest size class of VC funds a supermajority of all the capital general partners (GPs) call down from limited partners (LPs). This trend has accelerated in more recent fund vintages.

Small-dollar funds may get less of the overall fundraising pie, but their ranks continue to grow as more fund managers enter the industry. In most cases, sub-$100 million funds aren’t competing for the same institutional capital or sovereign wealth that typically invests in much bigger funds.

All this said, the upswing in smaller-sum funds continues. U.S.-based general partners raised more sub-$100 million venture funds in 2018 than in any year prior. This is true for two separate size classes: “Micro” and “Nano,” which exhibit similar growth patterns over time.

Let’s tackle the smallest funds first. “Nano VC” is a relatively new entrant into the venture lexicon, and its definition is somewhat in flux. Samir Kaji, a managing director at First Republic Bank who has tracked the phenomenon of small venture funds for years, coined the term in early 2017 to describe new venture funds raising $15 million or less. Recently, we’ve heard the term “Nano VC” used to reference funds under $25 million, a slightly more expansive definition (perhaps accounting for growing seed and early-stage deal size).

Below, we plot the count of new U.S. Nano VC funds raising $25 million or less, by year announced (via press release or regulatory filing), over time. It is based on a snapshot of Crunchbase’s data taken at the time of writing. 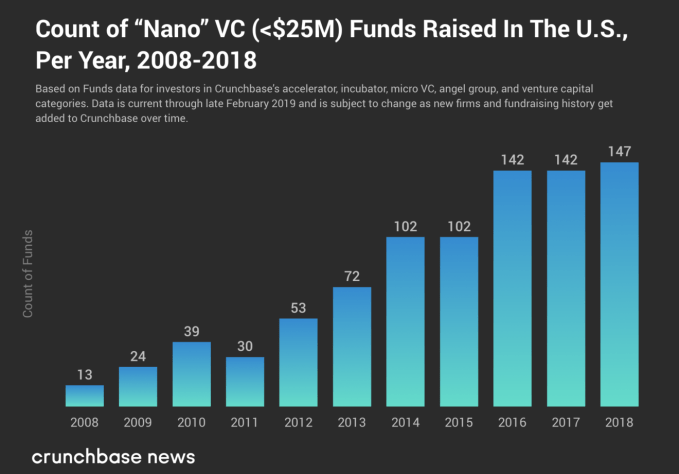 Funds at these sizes are mostly focused on pre-seed, seed and Series A deals. Many are led by first-time and other “emerging” fund managers early on in their investing careers, according to follow-up research by Kaji.

The next size class up, Micro VC, includes venture funds in the $25 million to $100 million range. (Quick terminology note: Sometimes, people refer to all funds under $100 million as Micro, without designating Nano funds as a separate size class.) Micro VC funds are also generally focused on investing in seed and early-stage companies, and are also commonly run by new and emerging managers.

Creation of Micro VC funds also picked up over time, as well. 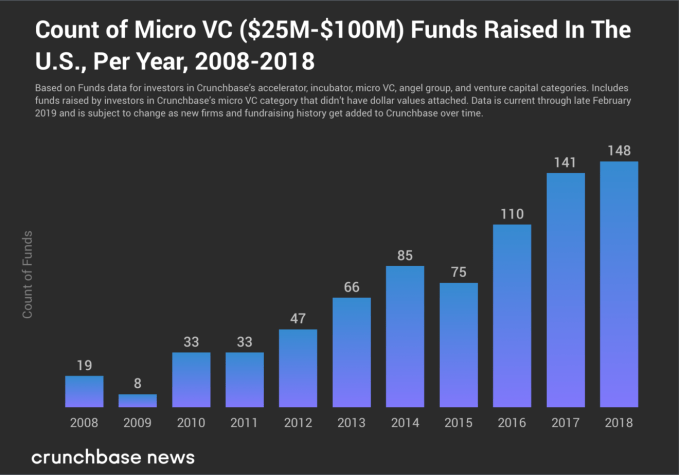 Although it’s a tidy little coincidence that our analysis shows roughly the same number of Micro and Nano VC funds raised in 2018, it’s important to remember that we’re sometimes talking about an order-of-magnitude difference in AUM between the two size classes. Nano and Micro VC funds accounted for roughly 24 and 25 percent, respectively, of the count of new venture firms announced or disclosed (via SEC filing) in 2018. However, Micro VC funds ($25 million-$100 million) raised six percent of the total capital raised by venture firms, while Nano VC funds (<$25 million) accounted for roughly one percent of total LP-GP dollar volume in 2018.

Lately, there’s been a lot of talk about declines in the reported number of seed-stage deals, a primary destination for capital raised by smaller funds. However, it’s likely that these declines aren’t as precipitous as the numbers may suggest. There are known delays in seed and early-stage deal reporting, as documented by Crunchbase News (in our quarterly reporting and methodology guide) and others. And, at least anecdotally, it seems like startups are staying in “stealth mode” longer, which only serves to exacerbate the reporting lag.

All this being said, projections (which try to compensate for delays using historical patterns of deal disclosures) from our Q4 2018 report on U.S. and Canadian venture investing found that seed-stage deal volume has declined for the past couple of quarters, while total dollar volume raised by seed-stage companies rose slightly in the final quarter of last year. Projected early-stage deal volume leveled off in the past several quarters, while projected dollar volume grew more than 11 percent quarter over quarter.

In other words, both seed and early-stage deals are getting bigger, on average, at the same time deal volume growth is stagnating in the U.S. and Canada. If this trend continues, funds on the smaller end of the AUM spectrum may face deal-flow pipeline problems in the future, or get priced out of bidding wars for a diminishing supply of equity in fledgling technology ventures with high growth potential.