The social investing and trading platform eToro announced that it will finally be launching its platform in the U.S. The platform, which already operates in more than 140 countries, will be available in 30 states and two territories with plans to expand elsewhere in the U.S. after receiving the necessary regulatory sign-offs.

The U.S. platform will only support trading for crypto assets at launch, but eToro plans to add additional asset classes within the next 12 months. In eToro’s existing markets, the company’s 10 million-plus users are able to trade and hold more than 1,500 different asset classes and markets, including stocks, bonds, cryptocurrencies, fiat currencies, commodities and more.

Though eToro even supports more advanced trading strategies — including short-selling and the use of leverage — the platform’s transparency and community engagement features act as great tools for beginners to learn the capital markets and learn how to trade.

EToro is equal parts trading platform, social network and educational resource. Anyone who signs up for eToro can see, comment and copy the trading activity of everyone else on the network, as well as their realized returns and losses to date (though only on a percentage basis to protect sensitive financial information). While learning from the strategies of their peers, users can opt to invest with virtual currency to practice and effectively train before actually risking their own money.

Alternatively, based on a trader’s track record, other users can choose to mimic their portfolio through eToro’s “CopyTrader” feature, which not only proportionally allocates funds to match the trader’s portfolio but can also automatically make any trade the copied investor makes. On top of that, members are also able to share, comment on, engage with or follow specific users, assets or markets — allowing them to participate in the latest debate and news regarding their particular area of interest.

Despite being limited to crypto at launch, almost all the same features available in eToro’s existing geographical markets will be available in the U.S. And alongside its trading platform, the company is launching its digital multi-signature eToro wallet, where users can store, send and receive multiple coins across a multitude of cryptocurrencies.

Using their eToro accounts, U.S. users can now transfer cryptocurrencies to and from their trading account and can easily convert between them, as well. The wallet initially will support Bitcoin, Ethereum, Litecoin, Bitcoin Cash, Ripple and Stellar for U.S. users, but the company plans to make additional currencies available in the near future. 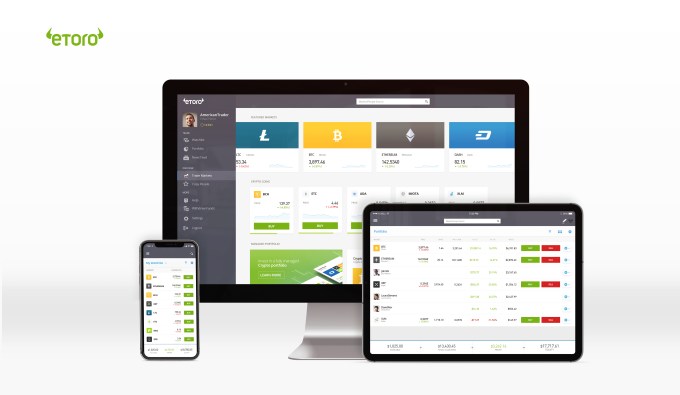 EToro users can make transactions and share trading activities and portfolio performance with the community, allowing users to discuss ideas that are executed using real dollars

The expansion plan, however, doesn’t come without risk. EToro is entering a competitive marketplace — alongside other popular trading platforms like Coinbase and Robinhood — and is launching its crypto-only version in the midst of “crypto winter,” where widespread weakness has plagued the sector.

Part of the strategy is attributable to the fact that crypto is a lighter lift from a licensing perspective relative to other asset classes in the strict and highly fragmented U.S. regulatory environment. But eToro’s launch strategy is also firmly rooted in the company’s belief in the immense market opportunity that exists with the tokenization of assets.

“We think [the tokenization of assets] is a bigger opportunity than the internet and we have to be in the U.S. when it happens, given it’s the financial hub in the world,” eToro founder and CEO Yoni Assia said in a conversation with TechCrunch.

EToro is taking a long-term view with its strategy and isn’t thrown by the current crypto weakness. Assia equated the market softness to the dot-com bubble, where despite the crash, the internet still permeated and disrupted the economy in the long run. And just like with the internet, Assia and eToro believe there will be more than enough room for multiple winners in the broader crypto ecosystem.

The company was the first platform in its markets to support Ethereum and Ripple, and believes that as similar currencies and the next generation of investors mature, eToro will be there to support them wherever they are in whatever way they need.

“When I founded eToro, I envisioned a community where people could trade, invest and share their knowledge in a simple and transparent way,” said Assia. “EToro also acts as a bridge between the old world of investing and a blockchain-powered future, helping our users navigate and benefit from the transition to crypto assets for wealth building.”