It’s telling that HTC opted to set up shop in Hall 7 at MWC. Rather than holding court alongside the Samsungs and Huaweis of the world, the company mingled among the peripherals and accessories makers. While it’s true there was news around the Exodus 1 blockchain handset, the Vive was its real star of the show.

After debuting the Vive Pro Eye back at CES, the company went decidedly more lightweight at this week’s show, with the launch of the Focus Plus. The headset is HTC’s latest crack at standalone VR, more akin to Oculus Go or Quest.

The latest rig brings improved visuals and controllers that swap camera-based motion tracking for an ultrasonic feedback system. I spent a bit of time with the new rig this afternoon in Barcelona. Off the top, it’s worth mentioning that the show floor of the world’s largest mobile conference is not the best spot to test any consumer technology, really — let alone a new VR rig. 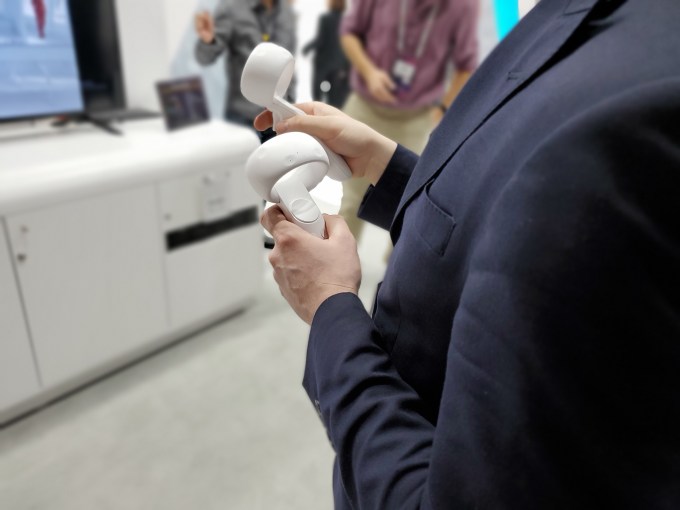 It’s also unfair to compare it to the pricier Pro Eye, which I took for a quick spin for an impromptu Home Run Derby in the middle of the booth. The Snapdragon 835-powered (same as the earlier model) rig serves different functions — though HTC was notably keen to demonstrate its potential versatility. As such, the two demos I tried were a healthcare simulator and a shoot ’n punch game.

The former is clearly an attempt to position the Focus Plus alongside the HoloLens 2. Of course, the VR headset has very different potential applications than Microsoft’s AR device — and at $599, it’s not exactly cheap, but still a fraction of HoloLens’ asking price. 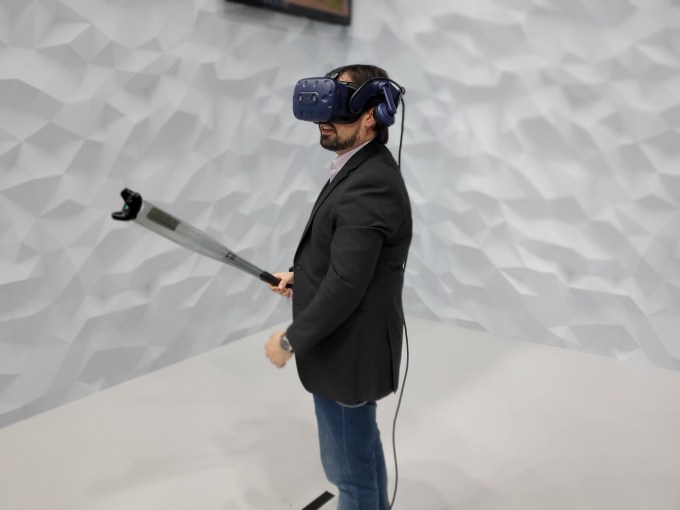 The SimforHealth medical app is an interesting one — it’s one in a long line of simulations aimed at helping medical professionals prep for real-world situations. The controllers take some getting used to as analogs for real-world actions like picking up objects. Also, I noted some issues with response time — it could have been the new technology, which isn’t as accurate as the more advanced camera tracking, or perhaps it was the setting. In either case, that, too, takes some getting used to.

Things went a bit better with Superhot VR. The company was using the title to demo both the Focus Plus and the new 5G Hub. The setup works better with more blunt force actions — things like punching and shooting — making Superhot a nice fit. Though wildly flailing around, punching at imaginary baddies in a crowded booth proved a bit more problematic.