The last time we saw Samsung’s foldable onstage, it was, quite literally, shrouded in darkness. The company debuted a prototype of the upcoming device at a developer conference, showing its folding method and little else.

As promised, the Galaxy Fold (not to be confused with the Ford Galaxie, mind) got a lot more face time today. The device was hardly the centerpiece of today’s news, of course (that title undoubtedly belonged to the S10 and all its variants), but the Fold is a clear attempt for the company to assert its place at the forefront of mobile’s future. In fact, the company kicked off the event with a promo video, complete with a Willy Wonka soundtrack. 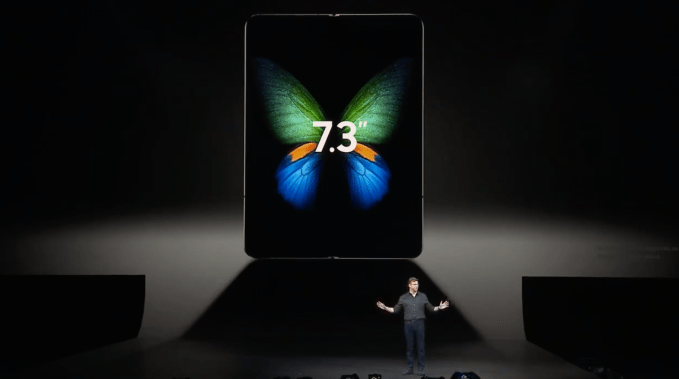 Samsung was beat to market by Royole, but early feedback of the handset has been less than stellar, instead regarded as something more akin to a developer device. When Samsung announced the imminent arrival of its own device, the company certainly lent credibility to the notion that the form factor could, indeed, be the future for a flagging mobile industry.

When folded, the handset sports a measly 4.6-inch display that only takes up about 3/4ths of the front. Unfolded, it turns into a 7.3-inch tablet. Naturally, the company had to customize the software for this one (with help from the Android team).

The Fold sports a feature called “App Continuity,” so you can open an app on the small screen and pick up where you left off on the big one. The OS also allows for users to have three separate app windows open at once when the device is in tablet mode. 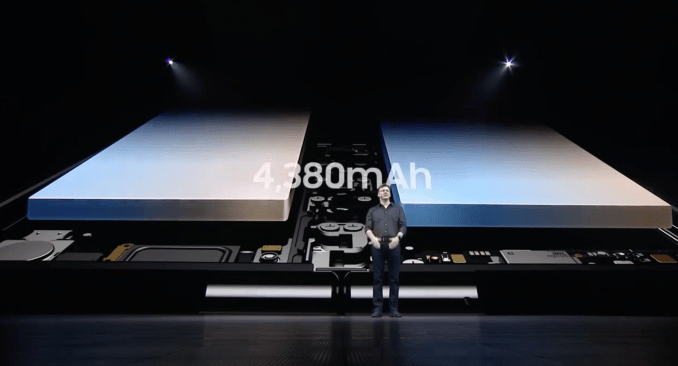 At the center is a customized hinge, capable of opening and closing hundreds of thousands of times. There are two batteries inside, one on either side of the phone, making for 4,380mAh, combined. You also get an impressive 12GB of RAM and 512GB of storage in there.

The design is actually pretty damn slick on this thing. It’s clear Samsung took the time to ensure the product is every bit as polished as the rest of its long-standing Galaxy line. The device wouldn’t look out of place alongside the S10. Granted, we’ve only seen it onstage, so far. I will say that the phone’s crease was visible on the display when the phone catches light. How much that actually impacts viewing, however, remains to be seen.

There are not one, not two, but six cameras on the Fold. The thing is covered in ’em. That’s three on the back, two on the inside and one on the front, so you never don’t have access to one. 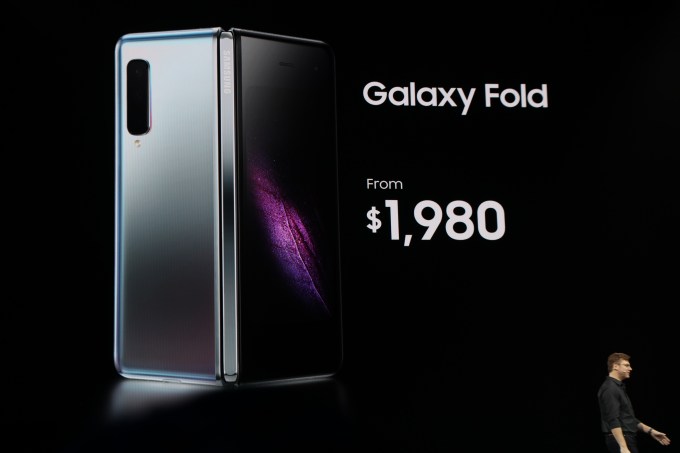 That premium design comes with a premium price tag, naturally. Premium and then some. Remember when $1,000 phones seemed insane? Yeah, well, this is double that, STARTING at $1,980. So, twice the phone at twice the price. As far as the pricing on the 5G version, well, your guess is as good as ours — but it might be time to start looking into a second mortgage.

The device launches April 26. It will be available in black, silver, green and blue, with customizable hinge colors. More information is coming soon — though, honestly, the product is a lot further along that I’d anticipated going into the show. I’d expect to see even more face time with the product next week at Mobile World Congress.