Entrepreneur First (EF), the London-headquartered “talent investor” that recruits and backs individuals pre-team and pre-idea to enable them to found startups, has raised a new fund of its own to continue scaling globally.

The $115 million first close was led by a number of leading (mostly unnamed) institutional investors across the U.S., Europe and Asia, including new anchor LP Trusted Insight. A number of well-known European entrepreneurs also invested. They include Taavet Hinrikus (co-founder of TransferWise), Alex Chesterman (co-founder of Zoopla) and EF alumnus Rob Bishop (who co-founded Magic Pony Technology, which was bought by Twitter for a reported $150 million in 2016).

This new fund — which EF says is one of the largest pre-seed funds ever raised — will enable the talent investor to back more than 2,200 individuals who join its various programs over the next three years. EF currently operates in Bangalore, Berlin, Hong Kong, London, Singapore and Paris.

This will translate to the creation of around 300-plus venture-backed companies, three times the number of startups it has helped create since EF was founded by McKinsey colleagues Matt Clifford and Alice Bentinck all the way back in 2011.

As part of the same announcement, EF says that General Partner Joe White has relocated to Silicon Valley, where he’ll focus on growing EF’s investor network on the West Coast. Perhaps the move shouldn’t come as a total surprise — White is the husband of Wendy Tan White, who was recently recruited by Alphabet’s X (formerly Google X) in Mountain View — but either way it feels like a smart move from EF’s perspective, as the talent investor, which is also backed by Reid Hoffman’s Greylock, seeks to create further ties to Silicon Valley.

Comments co-founder and CPO Bentinck: “We pioneered a new model of talent investing, and it’s encouraging to see this become a new frontier for venture capital. We believe the world is missing out on some of its best founders because of ecosystem constraints, a lack of co-founders and difficulties getting early pre-company funding. Entrepreneur First is changing that.”

EF is also sharing some data with TechCrunch, revealing for the first time numbers related to the number of EF graduating startups that have gone on to raise outside capital. For the 2015 “vintage” cohort, there were 16 seed rounds, eight Series As and now two Series Bs. For 2016, 24 seeds and five A rounds so far. For 2017, 41 seeds and two A rounds. And for 2018, 57 seeds and one Series A already. 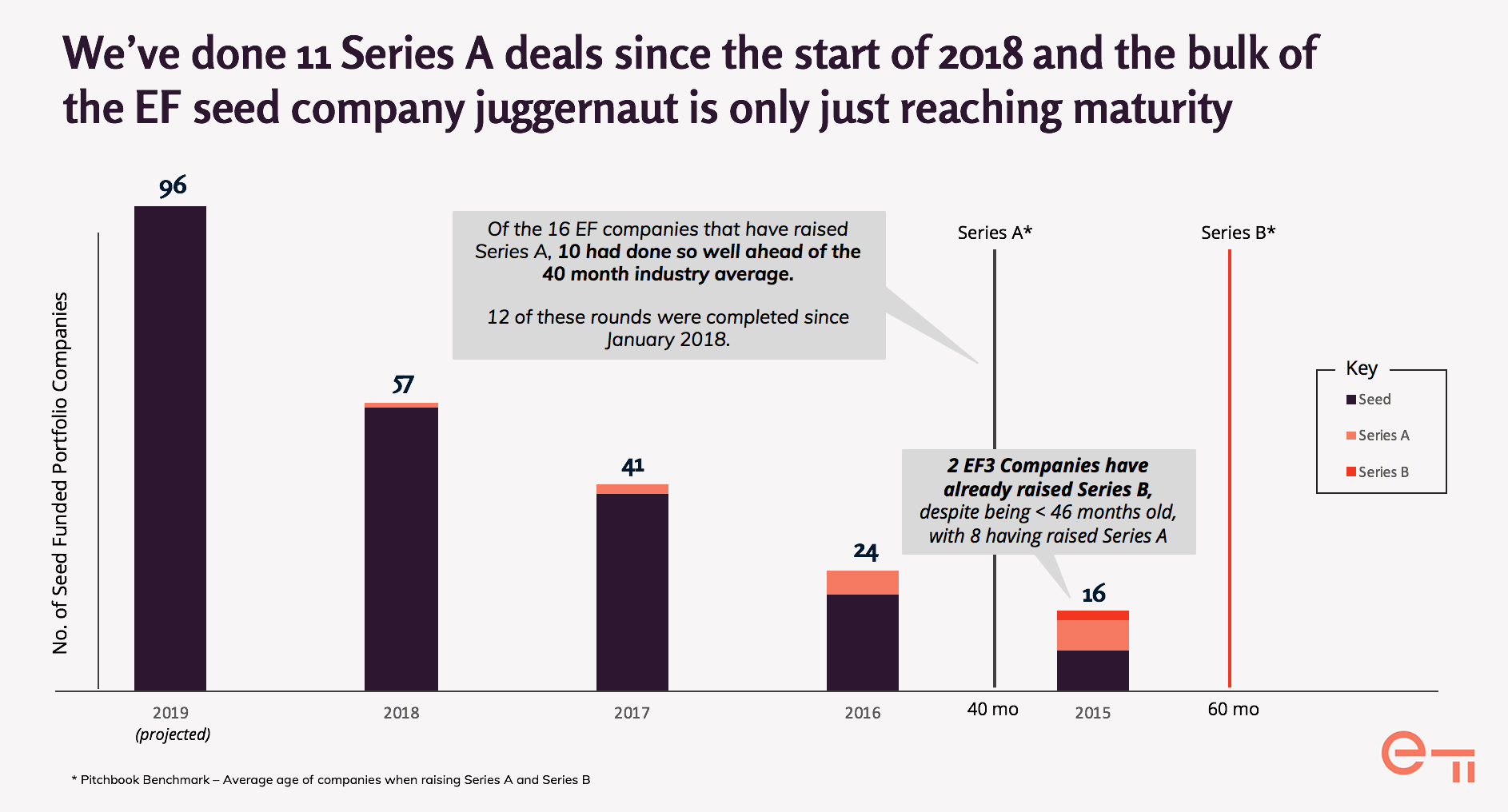 “The graph shows the volume of EF companies funded by VCs each year since 2015 (e.g. only those that raise a successful seed, not just those funded by EF),” White tells me. “The average age to Series A is 40 months according to PitchBook, or 60 months to Series B. Many of our companies are already ahead of that schedule, but many more will reach these milestones in the next 12 months.”

Below follows an email Q&A with EF co-founder Matt Clifford to find out more about the new fund and where it positions the so-called talent investor going forward.

TC: You’ve announced the first close of a new fund — $115 million. What is the remit for the fund and how does it fit into the broader EF program and funnel? Is it mainly for follow-on funding so EF doesn’t get too diluted for the most promising companies it helps create?

MC: The main thing we’re doing with this fund is taking our talent investing model global. We’ve always said the world’s missing out on some of its best founders and now we’ve got the capital to change that. It’s true it’s a lot bigger than our last fund, but that’s mainly driven by scaling internationally, not by a change in investment strategy. This fund will do stipends, pre-seed, seed and Series A investing in all our companies globally. It gives us capacity to fund 2,000 individuals around the world over the next three years.

We’ll absolutely be backing the best Entrepreneur First companies up to their Series A, but we’ve been doing that since 2016, so no change there.

TC: An earlier SEC filing suggested the fund was going to be much bigger. What happened?

MC: As far as I know, you have to file the hard cap with the SEC, but that’s not a target. This is a first close, not a final close, but with $115 million we can fully fund all six sites for three years, which is great.

TC: Like previous EF funds, the new fund’s LPs include many known founders and angel investors from the London tech scene and beyond. But this time around I gather you have some quite large institutional LPs, too, including from the U.S. How were those conversations different this time or was it simply the Reid Hoffman effect after Greylock Partners became an investor in EF itself?

MC: Yes, this is definitely a “growing up” fund for us. Our first “fund” in 2013 was under £400K, so a lot’s changed! Almost all this capital comes from institutional LPs and they include some of the best investors in venture capital funds globally. EF is a totally new stage of VC – talent investing – and LPs are quite rightly naturally fairly conservative. So Joe and I and the rest of the team have put in a lot of work to get institutions comfortable with something radically different and we feel it’s really paid off.

Certainly having Reid and others involved has helped a lot, but EF is just generally a very different beast from when we closed the last fund: the portfolio is now valued at well over $1.3 billion; we’ve had $300 million of exits; the fastest growing alumni companies have been funded by some of the best VCs in Europe and the US, etc. So across the board we had a lot more to show.

TC: EF began life calling itself a “talent-first” investor based on the EF program recruiting potential founders pre-team and pre-idea, which made you an outlier at the time. In that sense, you were — and I hesitate to use the word — ‘disrupting’ startup founding and traditional career paths. But now it’s starting to look like the EF model is a ruse to disrupt early-stage venture capital… or is that too simple an analysis?

MC: Haha! Alice and I are still much more interested in disrupting careers than disrupting VC. What I would say is that we believe we’re heading for a world where many more of the most talented people will become founders and most of those people won’t be in established tech ecosystems. We think that makes the opportunity hard to capture for traditional VC, because it assumes away the real problems – above all, where to find a world-class co-founder.

But we’re very much ecosystem players. I think we’ve now co-invested with pretty much every seed fund in Europe and SE Asia and I think they’d all tell you we play nice.

TC: It’s been reported that in a bid to expand globally, EF has come up against scaling issues with regards to matching founders and company formation. I’ve heard from my own sources that there were teething problems in Berlin, for example. What’s really going on?

MC: It’s definitely the conventional wisdom that VC isn’t scaleable, but I think we’re proving that wrong. If you take our core metric of co-founder matching, our most recent European cohorts had the highest matching rate so far – over 80% of people who joined us found a co-founder (though of course we don’t fund every team that forms). Similarly if you look at our first Paris cohort, it has one of the highest investment rates of any cohort we’ve ever done (and we’ve done 21 cohorts so far). Honestly, we’re really happy with the way the international expansion went, though I’d be the first to say that scaling is hard and we’ll make mistakes!

TC: We’ve seen a few EF clones appear. Sincerest form of flattery or blatant opportunism? And which, if any, part of EF is defensible?

MC: I always remember Paul Graham being asked this about YC clones and saying he felt “like how JK Rowling would feel if someone wrote a book called Henry Potter.” Joking aside though, I think YC has shown that highly defensible network effects in VC are possible. There are literally hundreds of YC clones and yet 95% of the value in accelerators has accrued to YC. I think we’re on track for something similar in the talent investing space.

The key way to think about defensibility is at the level of the customer – i.e. the founder. Which talent investor do you want to join? You want to join the one with the highest quality potential co-founders. Which one has that? Well, unsurprisingly, the one with the track record, the best alum, the best network, etc. Once you’ve established that – and EF is 5 or 6 years ahead of the clones – it’s very difficult to catch up and the advantage compounds quickly.

TC: You shared some stats with regards the success rate of EF startups and the figures look encouraging. But what we don’t yet still have are many exits. This isn’t surprising given that you invest incredibly early, so it will take time for startups to move through the cycle, but it also means that LPs backing EF continue to take a leap of faith. Is that a fair statement and what was the major pushback you got from LPs that declined not to join EF on this next phase of your journey?

MC: For sure, that’s fair. The numbers look great on paper, but it’s way too early to see significant cash returns. In fact, right now we don’t want more exits, as we want our best companies to keep growing privately for as long as possible. Last year, the portfolio raised more money than they had in the history of EF before that put together, so we’re feeling very positive.

It’s definitely true that some LPs don’t want to invest until you’ve returned a whole fund, but fortunately lots of them put in a lot of time to understand the model and were willing to partner with us for the long-term. This will be a big year for the portfolio – no big exits, I hope, but lots of momentum on revenue, product and funding for sure.

TC: Lastly, you now have a general partner and EF’s CFO Joe White (who I understand was instrumental in helping to raise this new fund) posted to Silicon Valley, where he’ll be helping to grow EF’s investor network on the West Coast. How important is U.S. venture capital to EF’s future and when can we expect to see EF launch a program across the pond?

MC: Yes, Joe and I spent a lot of time on planes and in the U.S. last year to pitch LPs! The vast majority of the capital in this fund is U.S.-based and, of course, Reid and Greylock are there too. What Joe, Alice and I all believe is that Silicon Valley remains perhaps the best place in the world to scale a tech company, even if it’s no longer the essential place to start one. This means that being able to build relationships with the best U.S. VCs is a key competitive advantage for an EF company.

We’ve already seen some of this, with Insight leading Tractable’s B round and Founders Fund leading Massless’s (EF LD9) seed. But Joe being there full time is an ideal way for us to accelerate this and I think you’ll see a bunch of EF companies raise U.S.-led B and C rounds this year. The key is the right capital at the right time.

We’re still thinking hard about our next stage of expansion. It’s hard to see a major need for EF in Silicon Valley itself, but there may be a big opportunity in other parts of North America. Watch this space…