Another security lapse has exposed millions of Aadhaar numbers.

This time, India’s state-owned gas company Indane left exposed a part of its website for dealers and distributors, even though it’s only supposed to be accessible with a valid username and password. But the part of the site was indexed in Google, allowing anyone to bypass the login page altogether and gain unfettered access to the dealer database.

The data was found by a security researcher who asked to remain anonymous for fear of retribution from the Indian authorities. Aadhaar’s regulator, the Unique Identification Authority of India (UIDAI), is known to quickly dismiss reports of data breaches or exposures, calling critical news articles “fake news,” and threatening legal action and filing police complaints against journalists.

Baptiste Robert, a French security researcher who goes by the online handle Elliot Alderson and has prior experience investigating Aadhaar exposures, investigated the exposure and provided the results to TechCrunch. Using a custom-built script to scrape the database, he found customer data for 11,000 dealers, including names and addresses of customers, as well as the customers’ confidential Aadhaar number hidden in the link of each record.

Robert, who explained more about his findings in a blog post, found 5.8 million Indane customer records before his script was blocked. In all, Robert estimated the total number affected could surpass 6.7 million customers.

We verified a sample of Aadhaar numbers from the site using UIDAI’s own web-based verification tool. Each record came back as a positive match. 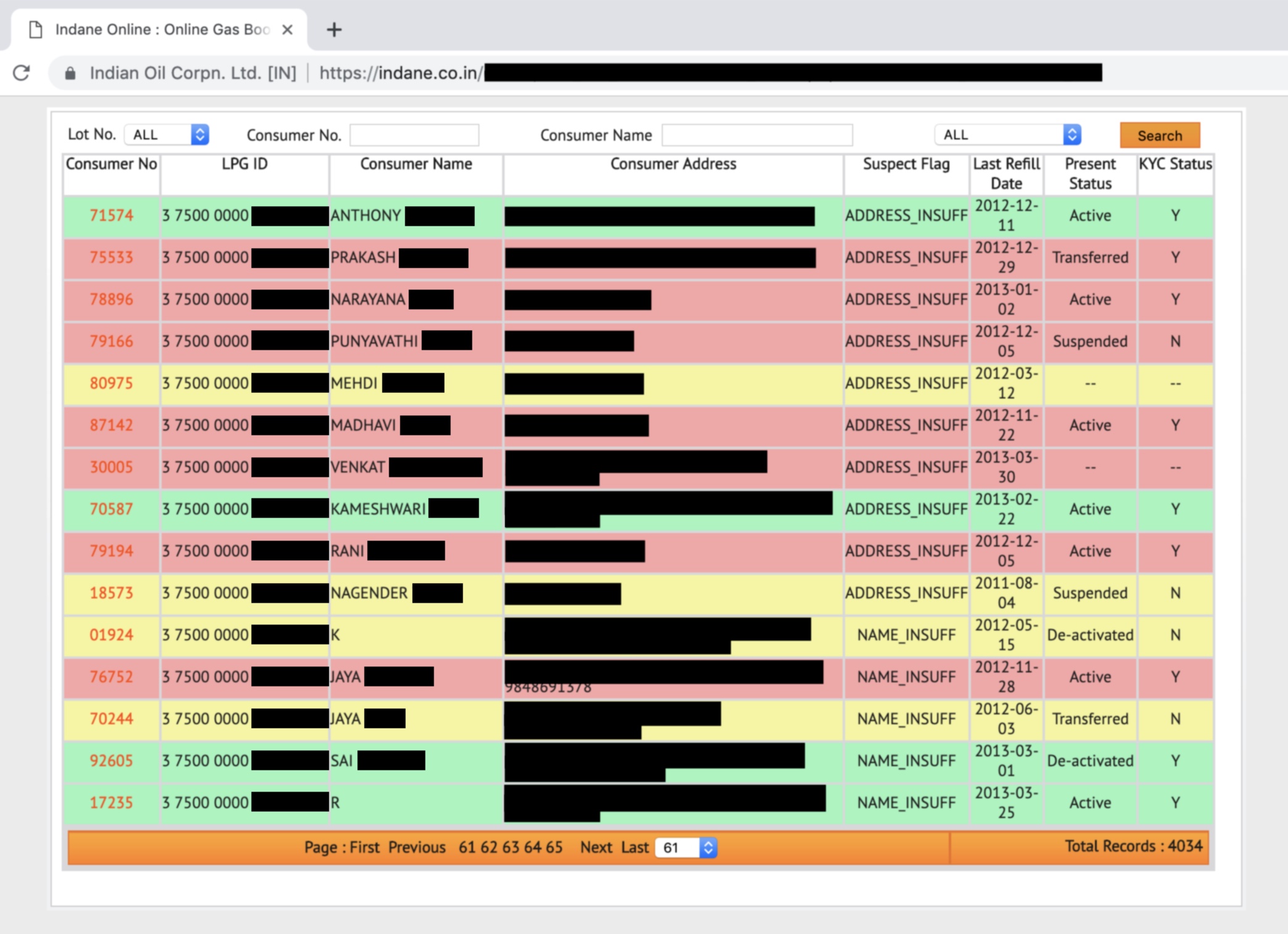 A screenshot showing the unauthenticated access to Indane’s dealer portal, which included sensitive information on millions of Indian citizens. This was one dealer who had 4,034 customers. (Image: TechCrunch)

It’s the latest security lapse involving Aadhaar data, and the second lapse to embroil Indane. Last year, the gas and energy company was found leaking data from an endpoint with a direct connection to Aadhaar’s database. This time, however, the leak is believed to be limited to its own data.

Indane is said to have more than 90 million customers across India.

The exposure comes just weeks after an Indian state leaked the personal information of more than 160,000 government workers, including their Aadhaar numbers.

Aadhaar numbers aren’t secret, but are treated as confidential and private information similar to Social Security numbers. More than 90 percent of India’s population, some 1.23 billion citizens, are enrolled in Aadhaar, which the government and some private enterprises use to verify identities. The government uses Aadhaar to enroll citizens in state services, like voting, or applying for welfare or financial assistance. Some companies also pushed customers to enroll their bank accounts or phone service to their Aadhaar identity, but this was recently struck down by the country’s Supreme Court. Many say linking their Aadhaar identities to their bank accounts has led to fraud.

The exposure is likely to reignite fresh concerns that the Aadhaar system is not as secure as UIDAI has claimed. Although few of the security incidents have involved a direct breach of Aadhaar’s central database, the weakest link remains the companies or government departments that rely on the data.

We contacted both Indane and UIDAI, but did not hear back.