Some 17 years ago, when internet dating was popular but still kind of embarrassing to talk about, I interviewed an author who was particularly bullish on the practice. Millions of people, he said, have found gratifying relationships online. Were it not for the internet, they would probably never have met.

A lot of years have passed since then. Yet thanks to Joe Schwartz, an author of a 20-year-old dating advice book, “gratifying relationship” is still the term that sticks in my mind when contemplating the end-goal of internet dating tools.

Gratifying is a vague term, yet also uniquely accurate. It encompasses everything from the forever love of a soul mate to the temporary fix of a one-night stand. Romantics can talk about true love. Yet when it comes to the algorithm-and-swipe-driven world of online dating, it’s all about gratification.

It is with this in mind, coincident with the arrival of Valentine’s Day, that Crunchbase News is taking a look at the state of that most awkward of pairings: startups and the pursuit of finding a mate.

Before we go further, be forewarned: This article will do nothing to help you navigate the features of new dating platforms, fine-tune your profile or find your soul mate. It is written by someone whose core expertise is staring at startup funding data and coming up with trends.

So, if you’re OK with that, let’s proceed. We’ll start with the initial observation that while online dating is a vast and often very profitable industry, it isn’t a huge magnet for venture funding.

In 2018, for instance, venture investors put $127 million globally into 27 startups categorized by Crunchbase as dating-focused. While that’s not chump change, it’s certainly tiny compared to the more than $300 billion in global venture investment across all sectors last year.

In the chart below, we look at global venture investment in dating-focused startups over the past five years. The general finding is that round counts fluctuate moderately year-to-year, while investment totals fluctuate heavily. The latter is due to a handful of giant funding rounds for China-based startups. 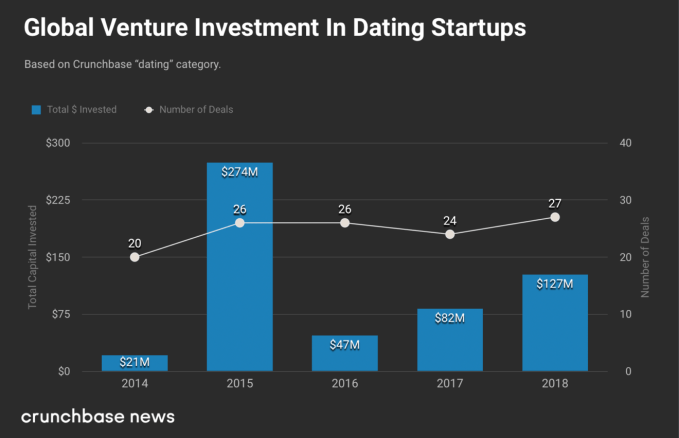 While the U.S. gets the most commitments, China gets the biggest ones

While the U.S. is home to the majority of funded startups in the Crunchbase dating category, the bulk of investment has gone to China.

In 2018, for instance, nearly 80 percent of dating-related investment went to a single company, China-based Blued, a Grindr-style hookup app for gay men. In 2017, the bulk of capital went to Chinese mobile dating app Tantan, and in 2014, Beijing-based matchmaking site Baihe raised a staggering $250 million.

Meanwhile, in the U.S., we are seeing an assortment of startups raising smaller rounds, but no big disclosed financings in the past three years. In the chart below, we look at a few of the largest funding recipients. 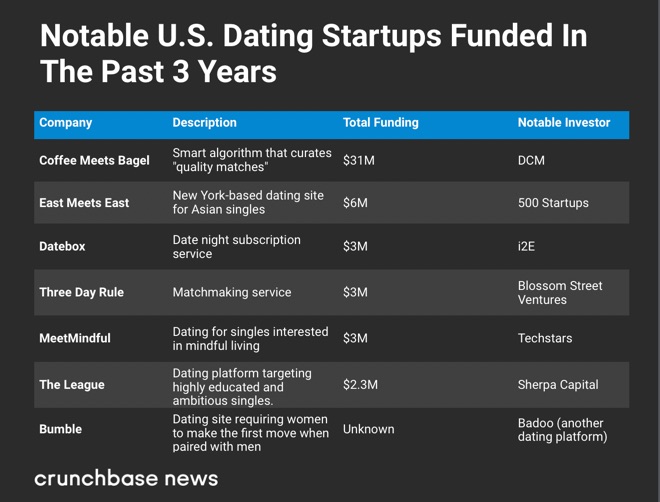 Dating sites and apps have generated some solid exits in the past few years, as well as some less-stellar outcomes.

Mobile-focused matchmaking app Zoosk is one of the most heavily funded players in the space that has yet to generate an exit. The San Francisco company raised more than $60 million between 2008 and 2012, but had to withdraw a planned IPO in 2015 due to flagging market interest.

Startups without known venture funding, meanwhile, have managed to bring in some bigger outcomes. One standout in this category is Grindr, the geolocation-powered dating and hookup app for gay men. China-based tech firm Kunlun Group bought 60 percent of the West Hollywood-based company in 2016 for $93 million and reportedly paid around $150 million for the remaining stake a year ago. Another apparent success story is OkCupid, which sold to Match.com in 2011 for $50 million.

As for venture-backed companies, one of the earlier-funded startups in the online matchmaking space, eHarmony, did score an exit last fall with an acquisition by German media company ProSiebenSat.1 Media SE. But terms weren’t disclosed, making it difficult to gauge returns.

One startup VCs are assuredly happy they passed on is Ashley Madison, a site best known for targeting married people seeking affairs. A venture investor pitched by the company years ago told me its financials were quite impressive, but its focus area would not pass muster with firm investors or the VCs’ spouses.

The dating site eventually found itself engulfed in scandal in 2015 when hackers stole and released virtually all of its customer data. Notably, the site is still around, a unit of Canada-based dating network ruby. It has changed its motto, however, from “Life is short. Have an affair,” to “Find Your Moment.”

With the spirit of Valentine’s Day in the air, it occurs that I should restate the obvious: Startup funding databases do not contain much about romantic love.

The Crunchbase data set produced no funded U.S. startups with “romantic” in their business descriptions. Just five used the word “romance” (of which one is a cold brew tea company).

We get it. Our cultural conceptions of romance are decidedly low-tech. We think of poetry, flowers, loaves of bread and jugs of wine. We do not think of algorithms and swipe-driven mobile platforms.

Dating sites, too, seem to prefer promoting themselves on practicality and effectiveness, rather than romance. Take how Match Group, the largest publicly traded player in the dating game, describes its business via that most swoon-inducing of epistles, the 10-K report: “Our strategy focuses on a brand portfolio approach, through which we attempt to offer dating products that collectively appeal to the broadest spectrum of consumers.”

That kind of writing might turn off romantics, but shareholders love it. Shares of Match Group, whose portfolio includes Tinder, have more than tripled since Valentine’s Day 2017. Its current market cap is around $16 billion.

So, complain about the company’s dating products all you like. But it’s clear investors are having a gratifying relationship with Match. When it comes to startups, however, it appears they’re still mostly swiping left.