In an operating room in rural Idaho, doctors prep a patient for surgery. They make a tiny, thumb-sized incision into the patient and insert a small robot while across the country a surgeon puts on a virtual reality headset, grabs their controllers and prepares to operate.

While this scene may seem like science fiction now, a Charlestown, Mass.-based startup called Vicarious Surgical is developing the technology to make that vision a reality.

The company’s co-founders, Adam Sachs and Sammy Khalifa, have been developing and refining the technology almost since they met at the Massachusetts Institute of Technology as undergraduates.

The 27-year-old Sachs said that he and Khalifa formally launched the company roughly five years ago when they graduated from MIT, and have been working on it ever since.

What really set the founders’ brains buzzing was the potential for combining their miniature robots with the ability to see inside the body using virtual reality headsets like the Oculus Rift.

“It wasn’t a ‘Eureka!’ moment, but more like two-or-three weeks as the vision came together,” says Sachs. “We can make robotics more human-like and virtual reality would give you that presence in the body.”

In all, the company has raised some $31.8 million to support the development of its technology.

For Sachs and Khalifa, even though the technology was broadly applicable in areas that would yield faster results than healthcare, tackling the health market first was important, Sachs says.

“A lot of people pointed out that our technology has a lot of applications. [But] healthcare for all of the reasons that people talk about really is meaningful to us,” says Sachs. “I have the luxury of being able to work on a project that’s fascinating from a technology standpoint and meaningful from a social good aspect.” 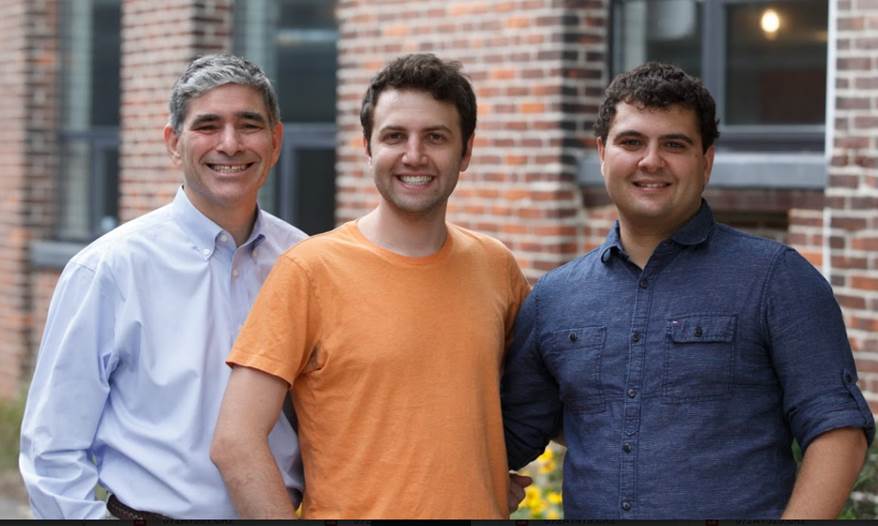 Science and entrepreneurship runs in the Sachs family. Adam’s father, Ely Sachs, is a professor at MIT and one of the co-founders of the revolutionary 3D-printing company, Desktop Metal.

According to Sachs, a number of innovations in robotics has led the company to develop what Sachs calls tiny humanoid robots.

“Picture a very robotic version of two human arms and a human head,” says Sachs. “Two robotic arms that have the same degrees of freedom and proportions of a human arms and a camera that is placed above the shoulders of the robot… it’s a few inches across.”

Using the motorized robot a surgeon can remotely control the robot’s movements to operate on a patient. “They can be in another room or they can be hundreds of miles away (with an excellent internet connection,” says Sachs.

The mission of Vicarious Surgical’s founders and its investors is to drive down both the cost of higher impact surgeries and access to the best surgeons through remote technologies.

The market for medical robots is highly lucrative. Earlier today, Johnson & Johnson announced the $3.4 billion acquisition of Auris Health — a maker of robotic diagnostics and surgical tools. In all, estimates put the robotic surgery market at somewhere around $90 billion, according to a report from Allied Market Research.

“We like to invest in things that if they work they truly change the industry. Minimally invasive surgeries and surgical robotics is definitely the future and it’s just getting started,” says Dror Berman, a managing director with Innovation Endeavors.

“There were 900,000 surgeries done using surgical robotics out of a total of 313 million surgical procedures. It’s a low percentage and it’s very expensive to buy those… In general that’s not offered to the vast majority of patients. Vicarious is about democratizing that access… if it works it will open a huge market for people who can use much better procedures for much better surgeries,” Berman says.

“One of the problems with that is that smaller hospitals can’t afford these $2 million robots,” says Sachs. “By making the devices tiny and fitting the motion inside a patient we can expand access long-term and in smaller hospitals where a surgeon might be able to start a procedure.”

Later, as Vicarious is able to build up taxonomies of different surgical practices and methods, the hospitals could begin to automate more aspects of the procedures to the point where many of these surgeries may just be handled by the robot.

The company is currently testing its miniature robots in laboratories and would not comment on whether it was using animal subjects. Vicarious is also modeling the human abdomen and conducting as many virtual tests as possible.

The new funding, Sachs says, will take the company through its applications for the Food and Drug Administration.

“A lot of our long-term vision is about growing and scaling our technology to the point where it’s accessible not just to big cities and major hospitals in the U.S. and also the small cities and towns in the rural U.S. and around the world as well,” says Sachs. “Long-term it’s about the democratization of surgery that can come from surgical robotics.”