Medium is seeking to juice up its premium subscription content in its home market with the acquisition of The Bold Italic. The 10-year-old online culture magazine will go behind the $5 per month Medium membership paywall. The deal will keep The Bold Italic afloat when other San Francisco-local publications have struggled, following the shutdown of the The Oakland Tribune an SFist, plus the layoff of most of the Easy Bay Express.

The Bold Italic could make Medium membership more appealing to Bay Area techies, newshounds and community-philes. It needs all the subscribers it can get after pivoting away from ads and laying off 50 employees, as well as shuttering two offices in 2017. That’s despite having raised $132 million. Last year it gave some publications whiplash by suddenly terminating its program that let them operate their own paywalls on the Medium platform. With so many publications competing for subscription revenue (TechCrunch launched its own subscription product called Extra Crunch today), and having raised so much money, many are uncertain of Medium’s fate. 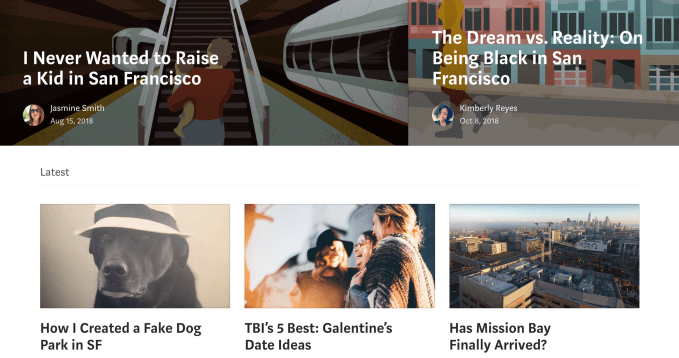 The Bold Italic almost died too. Back in 2015, its owner Gannett decided it wasn’t worth operating. But Scripted co-founder Sunil Rajaraman and tech author Sonia Arrison managed to buy The Bold Italic assets off of Gannett and relaunch the publication. It has continued to chronicle the weird mashup of local startup and hipster cultures, the art scene’s resistance against rent hikes and San Francisco’s persistent civic troubles.

“Medium is a natural partner for us,” writes Bold Italic editor-in-chief Clara Hogan. “Not only have we already been operating on the platform for several years, but we’re also both intrinsically committed to innovation and risk taking when it comes to journalism. We’re excited to now have greater resources to produce even better content and, most importantly, pay our contributors — old and new — significantly more.”

Bringing in premier, well-branded content could make people see Medium membership as more than just paying for what you could get elsewhere for free.