Mozilla has rolled out what it bills as enhanced and simplified controls for Firefox users to manage how they block trackers.

An update to its browser software, released today, offers a redesigned interface which includes new controls that let users choose from ‘standard’, ‘strict’ or ‘custom’ settings to help them control online trackers.

Using a tracker blocker is therefore one way to claw back a little online privacy. Although trackers can be used for lots of functions. Hence you may not want to block ’em all.

With the latest version of the Firefox browser the ‘strict’ level of tracker blocking is “for people who want a bit more protection and don’t mind if some sites break”, according to Mozilla. This mode also blocks trackers in all Windows.

Whereas ‘standard’ is summed up as a “set it and forget it” mode that blocks known trackers — but only when the user is using Private Browsing mode.

The standard mode will also block third party tracking cookies “in the future”. Though Mozilla looks to still be tweaking and testing that.

The third option is a custom tracker blocker mode which it says is “for those who want complete control to pick and choose what trackers and cookies they want to block”. This mode lets users choose whether or not to block trackers in all windows, or only in Private Browsing windows; and also to select different block lists. 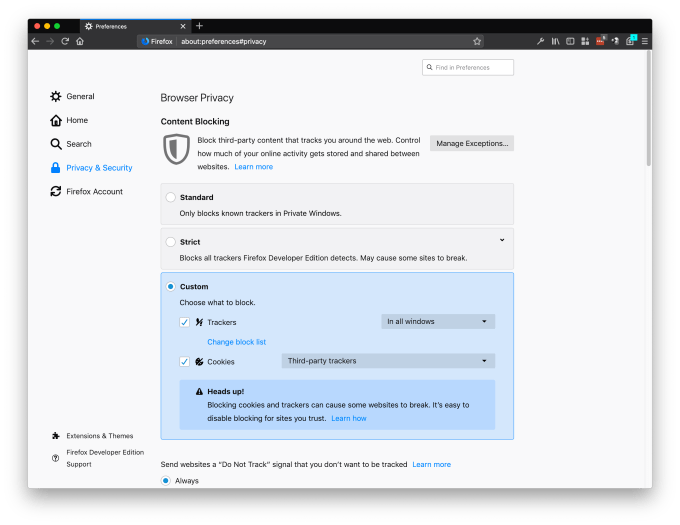 Mozilla has updated Firefox with a redesigned interface for tracker blocking

The redesigned tracker blocking interface follows an announcement from Mozilla last summer, when it said it would expand its approach to privacy by introducing default settings that block trackers, as well as “offering a clear set of controls to give our users more choice over what information they share with sites” — flagging the “harms of unchecked data collection”.

Concern over behavioral advertising has generally been stepping up in recent years, fuelled by a string of data misuse and security scandals which have encouraged policymakers to take a closer interest in how personal data is collected and where it flows.

Rising concern over creepy ads has also encouraged a rise in activity in the tracker blocking space. So the latest tweaks to Firefox are part of a wider privacy trend.

“We initially announced in October that we would roll out Enhanced Tracking Protection off-by-default. This was just one of the many steps we took to help prepare users when we turn this on by default this year,” Mozilla writes today, teeing up the redesigned tracker blocking interface.

“We continue to experiment and share our journey to ensure we balance these new preferences with the experiences our users want and expect. Before we roll this feature out by default, we plan to run a few more experiments and users can expect to hear more from us about it.”

A full list of changes in Firefox Release 65.0 can also be viewed here.

Among other listed improvements are a better pop-up blocker (“to prevent multiple pop-up windows from being opened by websites at the same time”); improved performance and web compatibility; and a better experience for multilingual users as also being among the updates.