Mobile cryptocurrency wallet BRD is announcing that it has raised $15 million in Series B funding.

The funding comes from SBI Crypto Investment, a subsidiary of Japanese financial services company SBI Holdings (formerly a subsidiary of SoftBank). BRD said the funding will allow it to grow its product and engineering teams, and to expand in Japan and across Asia.

“SBI Group’s investment in BRD allows us to firmly cement ourselves in the Asian market,” said BRD co-founder and CEO Adam Traidman in a statement. “It shows incredible support for the foundation that we have built in North America and reinforces our proven ability to scale the success we have achieved in the past 4 years. The new investment will ensure our long-term global growth, and we are incredibly excited about collaborating with SBI as a strategic investor and business partner to make that happen.”

It’s surprising to see a crypto startup raising money now, given the broader crypto downturn. After all, BRD bills itself as the simplest way to start buying and storing cryptocurrencies — but does that mean anything if consumers are being scared away from investing? 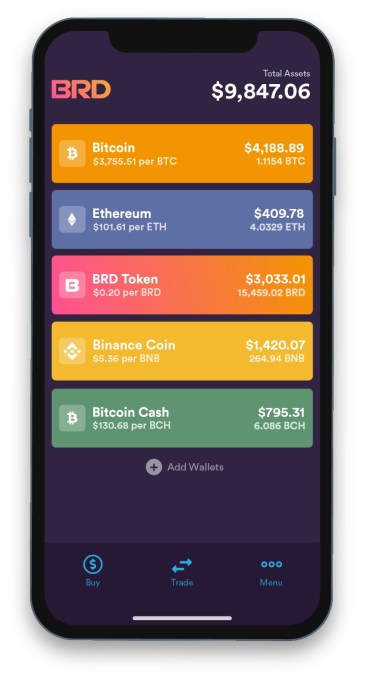 When I asked Spencer Chen, the company’s vice president of global marketing (and an occasional friend of mine), about the industry’s recent challenges, he argued, “The need for a single, global currency still exists.”

“That’s what all got lost in 2018 as the fast-money, traders, and speculators came piling into the crypto space,” Chen told me via email. “It really convoluted the core mission of a natively digital currency. Money that worked just like the open internet. As a company that’s built-to-last and committed to the core mission of crypto currency, there was nothing more frustrating than to witness the many steps backwards the industry at large took in 2018.”

In fact, BRD says it doubled its total install base in 2018, ending the year with 1.8 million users globally. It also says it’s currently being used to store the equivalent of $6 billion mostly in Bitcoin and Ethereum — with a 24 percent increase in monthly active users between November and December, after it started accepting stablecoins (which are pegged to the value of a fiat currency).