Gartner has released its quarterly PC sales survey for the fourth quarter of 2018, and it was the same old story. PC sales plunged in the fourth quarter and were down 1.3 percent for the year. The three top players — HP, Dell and Lenovo — accounted for 63 percent of sales worldwide in the quarter.

The company found in their preliminary sales research that worldwide sales totaled 68.6 million units in the fourth quarter. That may sound like a big number, but it’s down 4.3 percent over the same period last year.

Gartner principal analyst Mikako Kitagawa said after a couple of quarters of modest growth, the market began to slow down again for a number of reasons, including political and economic uncertainty and a CPU shortage. “There was even uncertainty in the U.S. — where the overall economy has been strong — among vulnerable buyer groups, such as small and midsize businesses (SMBs). Consumer demand remained weak in the holiday season. Holiday sales are no longer a major factor driving consumer demand for PCs,” she said in a statement.

That could be because consumers are spending much more time on mobile phones. Many tasks, whether shopping, email, banking or social media, that once required a home PC can easily be done on a mobile phone now, leaving PCs to the realm of business, where it isn’t always practical to do work on a smaller footprint. In fact, Black Friday online shopping totaled $6.1 billion this year, with mobile phones accounting for $2.1 billion.

The trade war that has adversely affected Apple and other tech companies probably also had an impact on the PC market.

Lenovo was the biggest winner in the worldwide report, achieving 24.2 percent of market share with number of units sold up 5.9 percent from last year. HP had 22.4 percent market share, but its numbers were down -4.4 percent. Dell came in third with 15.9 percent with market share, up a modest 1.4 percent. 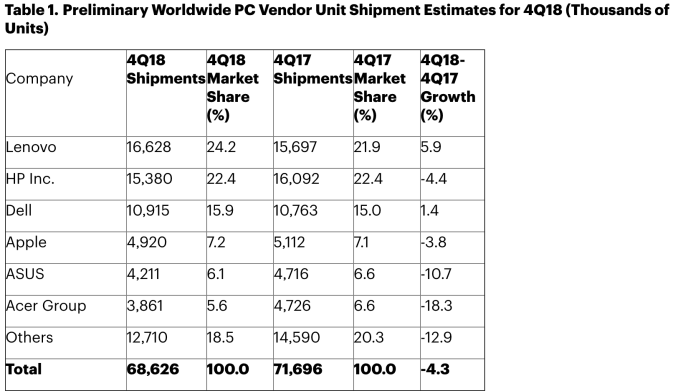 In the U.S., sales were even worse, down 4.5 percent, as small business buyers stayed away in the quarter. “The fourth quarter is typically a buying season for small office/home office (SOHO) and small business buyers in the U.S. as they want to use up the untouched budget before the tax year ends,” Kitagawa explained in the report. Unfortunately, they didn’t seem to do that this year. 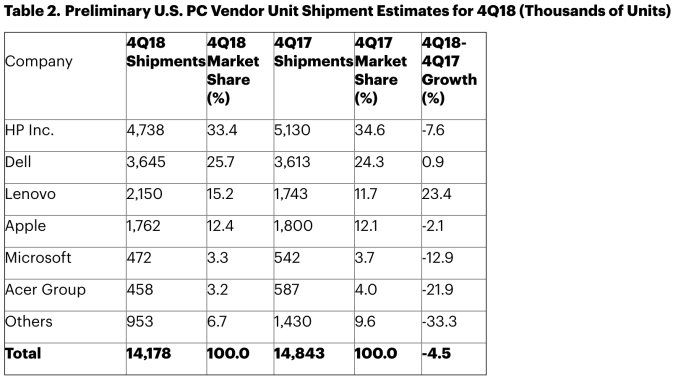 The top three vendors in U.S. sales were HP with 33.4 percent market share, growth down -7.6 percent; Dell with 25.7 percent, growth up 0.9 percent and Lenovo with 15.2 percent, growth up a whopping 23.4 percent for the quarter, making it the big winner in the U.S. market in terms of sales growth.

The report is based on data from sales of desktop PCs, notebooks and devices such as the Microsoft Surface, but excludes Chromebooks and iPads. Gartner is careful to point out these are preliminary numbers and they could change once the final data is in.