In fact, Synergy reported that overall spending in enterprise infrastructure, which includes elements like servers, switches and routers and network security; grew 13 percent last year and represents a $125 billion business — not too shabby for a market that is supposedly on its deathbed.

Overall these numbers showed that market is still growing, although certainly not nearly as fast the public cloud. Synergy was kind enough to provide a separate report on the cloud market, which grew 32 percent last year to $250 billion annually.

As Synergy analyst John Dinsdale, pointed out, the private data center is not the only buyer here. A good percentage of sales is likely going to the public cloud, who are building data centers at a rapid rate these days. “In terms of applications and levels of usage, I’d characterize it more like there being a ton of growth in the overall market, but cloud is sucking up most of the growth, while enterprise or on-prem is relatively flat,” Dinsdale told TechCrunch. 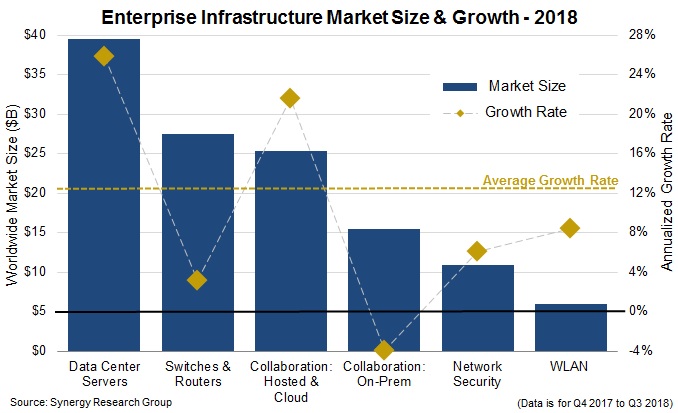 Perhaps the surprising data nugget in the report is that Cisco remains the dominant vendor in this market with 23 percent share over the last four quarters. This, even as it tries to pivot to being more of a software and services vendor, spending billions on companies such as AppDynamics, Jasper Technologies and Duo Security in recent years. Yet data still shows that it still dominating in the traditional hardware sector.

Cisco snaps up AppDynamics for $3.7B right before its IPO

Cisco remains the top vendor in the category in spite of losing a couple of percentage points in marketshare over the last year, primarily due to the fact they don’t do great in the server part of the market, which happens to be the biggest overall slice. The next vendor, HPE, is far back at just 11 percent across the six segments.

While these numbers show that companies are continuing to invest in new hardware, the growth is probably not sustainable long term. At AWS Re:invent in November, AWS president Andy Jassy pointed out that a vast majority of data remains in private data centers, but that we can expect that to begin to move more briskly to the public cloud over the next five years. And web scale companies like Amazon often don’t buy hardware off the shelf, opting to develop custom tools they can understand and configure at a highly granular level.

Jassy said that outside the US, companies are one to three years behind this trend, depending on the market, so the shift is still going on, as the much bigger growth in the public cloud numbers indicates.

AWS wants to rule the world