The UK government has announced new powers for police to tackle illegal use of drone technology, including powers to land, seize and search drones.

This follows the recent Gatwick drone fiasco when, just before Christmas, a spate of drone sightings near the airport caused a temporary shutdown of the runway, and disruptive misery for thousands of people at one of the busiest travel times of the year.

“The police will have the power to search premises and seize drones — including electronic data stored within the device — where a serious offence has been committed and a warrant is secured,” the government writes in a press release today, trailing its plans for a forthcoming drone bill.

Police powers to ground drones had already been announced as incoming in late 2017. But the Gatwick chaos and some trenchant criticism about government complacency about the risks posed by misuse of the technology appears to have concentrated ministerial minds on finding a few extra deterrents for police.

Such as the power to demand drone owners produce proper documentation for their craft, tied to an incoming national registration scheme which will apply to all drones weighing 250 grams or more.

“The vast majority of drone users fly safely and responsibly, and adhere to the rules and regulations that are in place. However, if a drone is used illegally we must ensure that the police have the powers to enforce the law, and that the most up to date technology is available to detect, track and potentially disrupt the drone,” the government writes today in its official response to a public consultation on drone safety regulation, adding that: “The recent disruption to Gatwick airport operations, affecting tens of thousands of passengers in the run up to Christmas, was a stark example of why continued action is required to make sure drones are used safely and securely in the UK.”

Under the new plan, police forces may in future only need “reasonable suspicion” that an offence has been committed to request evidence from drone owners.

The government is also planning to give police the ability to issue fixed penalty notices of up to £100 for minor drone offences.

It says the new powers will be set out in detail a (long delayed) draft drone bill now due this year — having failed to materialize last Spring, as originally promised.

“The new measures proposed in the consultation, such as giving the police the power to request evidence from drone users where there is reasonable suspicion of an offence being committed, were met with strong support from respondents,” the government also writes.

In another post-Gatwick development, it is planning to beef up stop-gap flight restriction rules by expanding the current 1km flight exclusion zone around airports to circa 5km.

The 1km zone had been widely criticized as inadequate. 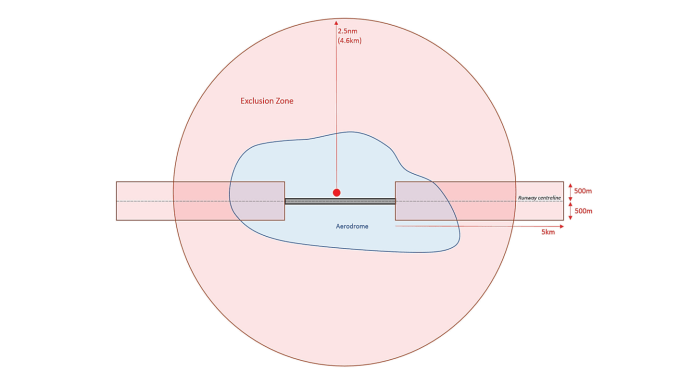 (Screenshot, from: Taking Flight: The Future of Drones in the UK Government Response document)

All drone operators will be required to ask permission from an airport’s Air Traffic Control to fly within the larger exclusion zone, per the document.

The government says it does not believe the ~5km exclusion zone will prevent what it dubs a “deliberate incident” in itself. But suggests it will “help protect all arriving and departing aircraft using our aerodromes and avoid potential conflict with legitimate drone activity”.

Drone maker DJI welcomed the change. “We are pleased to see that the new rectangular restriction zones around airport runway approach paths address the risk at airports in a way similar to the latest version of DJI’s geofencing technology,” said Christian Struwe, head of Policy at DJI EMEA, in a statement. “This will provide smarter protection for airplanes in critical areas during takeoff and landing and is in line with established aviation practices.”

The government’s consultation response document also confirms the date for the previously announced drone registration scheme — saying this will come into force in November.

The government revealed the plan for a drone registration scheme in late 2017, when it said that owners of drones weighing more than 250 grams would in future be required to register their devices. But at the time of the Gatwick incident the scheme had not yet come into force.

Registration will apply from November 30, 2019, the government says now.

In a further announcement today, it say the Home Office will begin testing and assessing the “safe use” of a range of counter-drone technology in the UK.

“This crucial technology will detect drones from flying around sensitive sites, including airports and prisons, and develop a range of options to respond to drones, helping to prevent a repeat of incidents such as that recently experienced at Gatwick,” it writes.

Military grade counter-drone tech enabled Gatwick to reopen its runway despite continued drone sightings, according to the BBC, which reported last week that the airport had spent £5M to prevent future attacks (Gatwick did not disclose the exact system it had bought).

Commenting on the new policy measures, UK aviation minister, Liz Sugg, said in a statement: “Drones have the potential to bring significant benefits and opportunities, but with the speed of technological advancement comes risk, and safety and security must be our top priorities.

“That’s why we are giving the police powers to deal with those using drones irresponsibly. Along with additional safety measures these will help ensure the potential of this technology is harnessed in a responsible and safe way.”