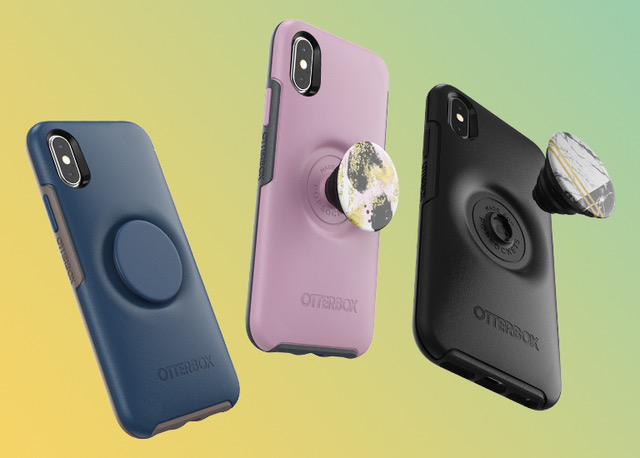 I have an OtterBox case on my phone, mostly because my five month old loves to knock my phone out of my hands.

I also have a PopSocket on my phone, again, because my five month old loves to knock my phone out of my hands. It’s also nice to use the PopSocket as a little kickstand while I travel.

So when TC colleague Brian Heater sent this to me and said “this is made for you”, he… was very much right. Just announced at CES, it’s an OtterBox with a built-in PopSocket.

Called the “Otter + Pop” (because, come on, how could they not call it that) it’s designed to bring the perks of a PopSocket without the hump. When in use, it pops out just as you’d expect; when not, it folds into itself and goes almost completely flush with the case.

Don’t like the default look? It uses the same swappable face system as other PopSockets — “PopTops”, as they call them — so you can drop a new one on with just a quick twist. It’s only available for iPhones (7, 7 Plus, 8, 8 Plus, X, Xs) at the moment — no Android love, at least not yet.

The only downside I can think of: you can’t pick where the PopSocket goes. One of the nice aspects of the PopSocket is being able to pull it off/put it on over and over again, precisely adjusting where it sits until you’ve found a solid balance of comfort/thumb reach. Im sure they’ve got a good idea of where most people put’em on each phone — but if you like yours in a super particular spot, you’ll want to stick with the two-part solution.

The companies say the new case are going on sale immediately this spring, starting at $60 a… pop.

(Update: while the companies originally noted that they’d go on sale today, these cases won’t actually go on sale until sometime this spring)