VR headsets make me queasy. I’m not alone. It’s a common complaint about virtual reality content but this startup might have solved the problem in the most unlikely way. Holoride wants people to use VR in the backseat of the family sedan.

My stomach is happy to report it works as advertised.

Yesterday, after strapping on an Oculus Go, I was flung around a race track outside of Las Vegas at speeds approaching 90 mph and I didn’t get sick. In fact, after the ride was completed, I was shocked to find out we were going faster than 35 mph. Holoride’s system was entertaining and distracting. It removed me from the ride and placed me in a space battle with Iron Man and Rocket.

After the demo I was left with just one thought: The future of in-vehicle entertainment could be virtual reality. 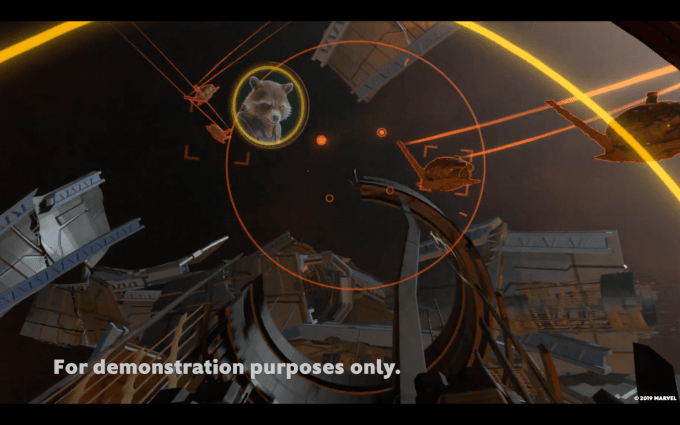 Here’s how it worked.

After sitting down in the back of Audi’s new electric SUV, the e-tron, a company representative fitted me with an Oculus Go headset that was wired to the car. I was handed a remote and told to follow along.

Marvel’s Rocket appeared as my instructor. He said I was to help him and Iron Man defeat some of Thanos’ baddies by shooting them down while we fly through space.

And off we went — both in the game and on the track. It felt just like a ride at Disney World.

The content on the screen matched the dynamics of the vehicle. As the Audi SUV whipped around the track, the content was synced with the movements.

When the e-tron bared left, my rocket ship in the game bared left. When the e-tron flew down the track’s straightaway, my rocket stayed on its course. Meanwhile, I was in the backseat smiling like a child as I waved around a remote control trying my hardest to save the universe from Thanos.

Somehow, I didn’t get sick. 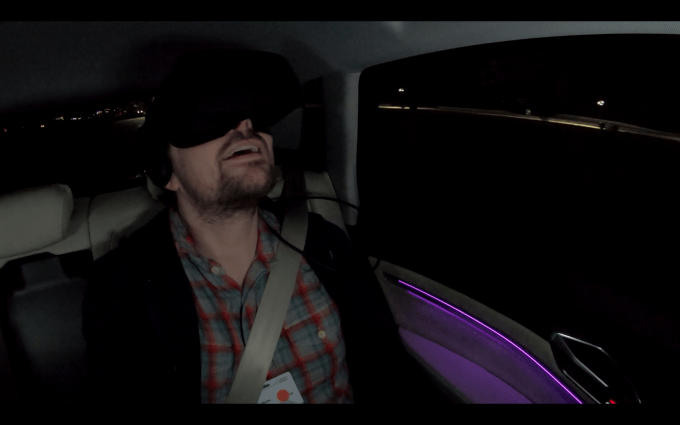 Holoride’s secret sauce involves matching the VR content with the slight movements of the vehicle. The content compensates everything from bumps to swerves to sudden stops. The company sees a future when passengers can endure long car rides free of boredom and without car sickness.

The possibilities of this technology is compelling. Never mind entertaining passengers, motion sickness affects a lot of people and this appears to eliminates it. If programmed for a plane or train or long distance bus ride, Holoride’s system could allow for a more comfortable ride.

Holoride (no relation to Microsoft’s HoloLens) developed the technology inside Audi over the last two years. The automaker spun out the company, freeing it up to work with other car makers to put its system in their vehicles.

VR’s tendency to induce motion sickness is one of its biggest hurdles, and that’s with most people experiencing it while just standing there. Add a moving vehicle to the mix — like when you’re trying to use VR to space out as the passenger on a roadtrip — and your inner ear is getting all kinds of mixed signals. Holoride aims to turn that challenge into a feature.

This early demo shows Holoride is on the right path but I fear it’s a steep climb to gain content and users. Holoride worked with Disney Games and Interactive Experiences to develop the content.

The demo I experienced left me impressed. It featured everything I want: interactive content, marquee characters, and a fun story line. But I could only play this game a few times before I would get bored. The novelty would probably last a bit longer on my kids, but not much.

The Holoride founders tell TechCrunch it intends to release an SDK by year’s end that would open the platform to developers. It’s unclear if current VR content could be easily ported to the system.

While Holoride says it’s an independent company, the roots of this startup are all Audi. The automaker holds a minority interest through subsidiary Audi Electronics Venture, which developed the technology. Audi will license the technology to Holoride and the startup will use an open platform to allow any automaker from Ford to Tesla and everyone in between as well as content developers to create whatever reality formats they desire.

Nils Wollny, head of digital business at Audi co-founded Holoride along with Marcus Kuhne, who was project lead of Audi’s VR experience and Daniel Profendiner, a software engineer at the company. Wollny is Holoride’s new CEO.

The co-founders began working on VR in 2014, but the project started in earnest two years ago when it partnered with Disney Games and Interactive Experiences

Audi spins out Holoride to put VR in every car

The system needs to be configured for different vehicles. That’s part of the development process. Right now, in Holoride’s development cycle, a Holoride experience programmed for an Audi etron will not work in a Chevy Tahoe. A person couldn’t take the headset from one vehicle to another.

A lot of questions remain about for Holoride. Though Audi’s name is attached to the project, Holoride is an independent company. The founders tell TechCrunch it has plenty of runway before it needs to look for another round of investment.

Few technology demos have left me as impressed as I was with this system. But developing a compelling demo is different from building a successful content company. I, for one, would love to live in a future where I could strap on a headset and eliminate motion sickness and everyone else on an intercontinental flight.