Let’s face it, we love large numbers. We are obsessed with them, whether it’s Forbes list of wealthiest individuals or tech unicorns, if it’s a big number we can’t get enough. Such is the case with the somehow magical trillion-dollar mark that Apple briefly reached last summer. We splashed the headlines and glorified it as though it mattered… but it didn’t.

It was just a number.

Sure it showed the tremendous value of the Apple stock, but it was a moment in time fueled by an overheated stock market, full of sound and fury, but in the end adding up to nothing. Fast forward 4 months and the company has lost more than a third of its stock value. Last week, it lost $75 billion with a B in market cap in a single day. We got a hard lesson in stock market physics — what goes up eventually must come down.

In that light, the trillion-dollar mark was fun, but it didn’t mean much in the end. Ultimately, Apple stock still has value. It may make a few less billion next quarter than it predicted, but it’s still got plenty of cash on the books, and chances are it will be just fine in the end.

As long as the US-China trade war rages on and the US economy continues to cool, it’s probably not going to approach that trillion threshold again any time soon. Investor enthusiasm for tech stocks in general has waned considerably since those heady dog days of August.

Just as Bill Gates or Warren Buffet or Jeff Bezos may have a few billion more or less on the books on any given day, it just doesn’t matter all that much. It’s not as though they’re going broke. Just as Apple isn’t going to shut down because it might have a bad (less good) quarter than it was projected to have.

Nobody grows forever, not even Apple. It had to cool off at some point, and if this is cooling off, 87 billion instead of 91 billion, it’s a drop-off that investors should be able to understand and live with. If it became a troubling pattern and an ice age set in, that would be another matter, but Apple is still selling product hand over fist, tens of millions of iPhones is still a lot of iPhones. Wall Street should probably take a chill pill.

It’s worth noting that Apple has hardly been in alone taking a huge hit on its stock price, especially tech stocks, which have been taking a beating since November on Wall Street. Want to talk a trillion dollars, how about the biggest names in tech losing a trillion (that’s with a T, folks) in value in one stretch in November. When Apple halted trading last week to announce lower than expected revenue, the stock dove even further, as it confirmed the worst fears of investors.

Worse, Chinese consumers have driven iPhone sales just as the Chinese economy has hit a massive speed bump this year. In June, Reuters reported shockingly weak growth. In November, Bloomberg reported that the Chinese economy was slowing down long before the president started a trade war. .

Apple also appears to be having more trouble selling the XR worldwide than it had projected, and fluctuating currency rates are also wreaking havoc — not to mention the trade war — but analyst Horace Dediu from Asymco sees Apple generating strong revenue from non-iPhone hardware, as the chart he shared on Twitter recently shows:

How does Apple’s business look if you exclude the iPhone? pic.twitter.com/bk5xGCQ2oR 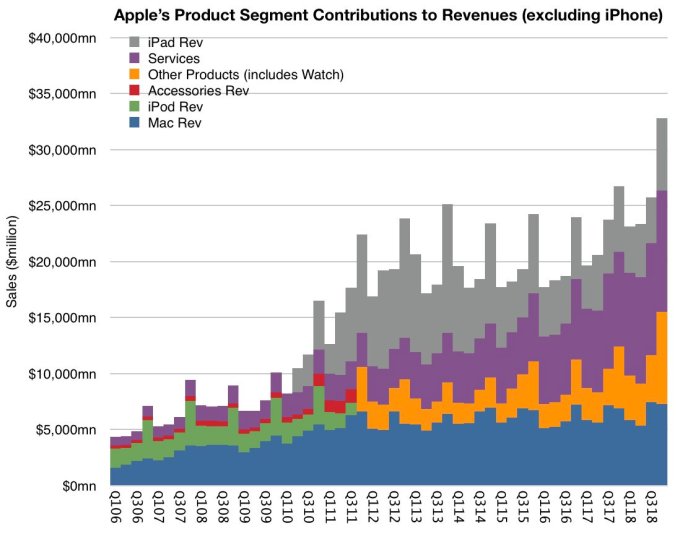 Whatever the future holds for Apple and other tech stocks, we clearly like to throw around large numbers. Yet companies don’t tend to live and die by their market cap. It’s not a metric that matters all that much to anyone, except those of us who like to marvel at the size of the biggest numbers, and then click our tongues when they inevitably fall to earth.