Billionaire entrepreneur Elon Musk’s vision of an “entirely new system of transport,” which he unveiled Wednesday night at a splashy event in Hawthorne, California, wasn’t a reusable rocket like the ones he’s building at his nearby SpaceX headquarters. Nor is it an electric vehicle, like the Teslas he is producing at a factory in Fremont, California.

Tonight, Musk showed off a 1.14-mile test tunnel — that snakes its way underneath 120th Street in the city of Hawthorne — that his other business, The Boring Company, dug for about $10 million using a modified boring machine called Godot. (That $10 million figures includes the cost of building the tunnel, all internal infrastructure, lighting, communication and video, safety systems, ventilation and track, according to the company.) For Musk, this is merely a demonstration of what could be: a network of low-cost tunnels used for transportation, utilities or water and built for millions of dollars, or even billions, less than those constructed for subways or trains.

And it’s a vision that he’s funding, for now. Musk estimates he’s spent about $40 million of his own money funding The Boring Company.

Boring is developing an entirely new system of transport

These tunnels, which at about 12-feet in diameter are smaller than a subway, are cheaper to build thanks to the company’s boring machines, Musk and Boring Company president Steve Davis contend. 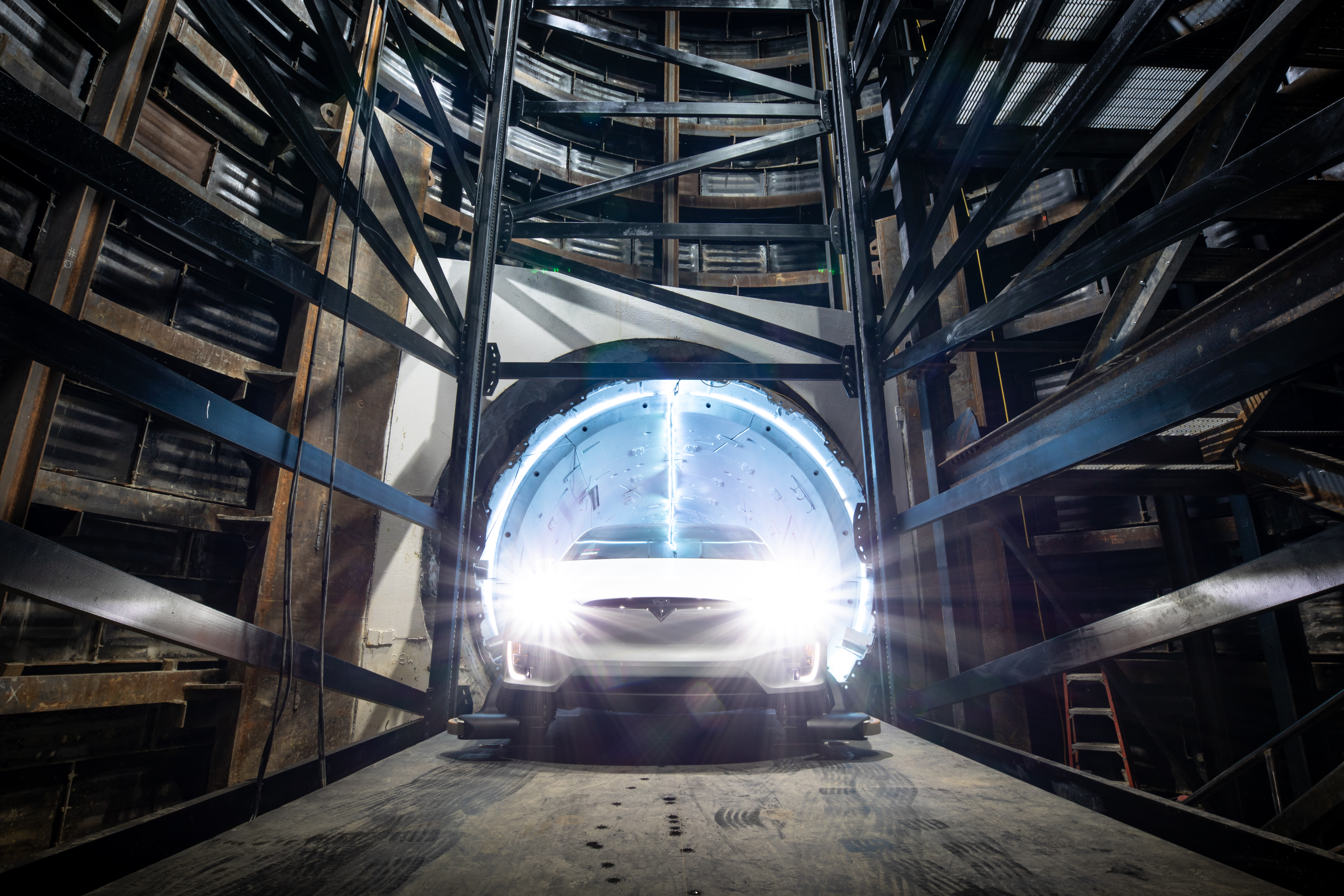 The tunnels could be stacked — Musk calls it a 3D network — and operate like a giant underground highway, with vehicles entering and exiting at strategic points along the way via ramp, spiral or elevator depending on available space. The main tunnel would allow vehicles, which are stabilized via retractable tracking wheels, to travel up to 150 miles per hour. Once a vehicle leaves the main artery, speeds would be reduced. (The retractable tracking wheels are an important, new development; Musk said they originally were going to place the vehicles on a skate, which would travel at high speeds, but ditched the idea because it was too “complex.”

These entry points could take up less than two parking spaces for an elevator, Musk said, which TechCrunch was able to attest to, at least with the demonstration tunnel.

“You can weave these stations throughout the fabric of the city without changing the character of the city, Musk said during a press briefing.

There are some important caveats to this system. This is a concept; it currently doesn’t exist at the scale Musk envisions, although there are numerous cities and utilities interested. (Davis noted they get between five and 20 requests or inquires a day from municipalities and utilities.)

Tesla in @boringcompany tunnel with retractable wheel gear that turns a car into a rail-guided train & back again pic.twitter.com/3a6i0NoSmi

And only autonomous, electric vehicles would be allowed in the Loop, as The Boring Company is calling the concept. A Tesla Model X was used in the demo Wednesday night, although Musk insisted during a press briefing that “this is not some walled garden or something only for Teslas.” It wasn’t clear what Musk meant by “autonomous.” Teslas are equipped with a Level 2 system, via the SAE’s definitions. A Level 4 system, which currently doesn’t exist in commercial vehicles, is considered fully autonomous under certain conditions.

He also said, several times, that this is meant to be a complement to other forms of transport, not to the exclusion of other things.

The Loop would also have dedicated vehicles for pedestrians and bicyclists that Musk speculated could cost about $1 a ride, if shared. The vehicles designated for public transport would run in a loop and get priority.

The public transport piece is notable because, if the Loop existed today, there would be few vehicles that could qualify as autonomous and electric, except Tesla. While the Tesla Model X was used in the demo rides Wednesday night, Musk said he believes smaller electric vehicles like the Model 3, or the yet to be seen Model Y, would be better use cases. And yes, there would be bike racks.

TechCrunch’s ride through the Hawthorne test tunnel began near 120th street and Prairie Avenue, next to a nondescript building — “The Brick Store” stenciled discreetly on one side — that only stood out because of all the security surrounding it. The Model X had been outfitted with the  retractable wheels, which Musk said would be an aftermarket product that might cost between $200 and $300.

Once the vehicle descended, the test driver slowly accelerated to about 44 mph through the tunnel, back towards Crenshaw and 120th Street. The tunnel, hazy with dust from the construction, and lit by neon-like lighting, delivered a bumpy-ish ride on occasion. Musk later explained that this was because they had some trouble with the paving. A system for the public would be much smoother, he said.

The entry point, near the Brick Store, provides an important link to The Boring Company story and vision. Earlier this year, TechCrunch reported that Musk has started a company called The Brick Store LLC to produce and sell bricks, according to public documents. The new company, which was founded in July, will be managed by Davis, the ex-SpaceX engineer who is also running The Boring Company.

The plan, is for The Boring Company to use the dirt extracted during the boring process to produce bricks, which will cost $0.10 a brick, Musk said. These bricks were on display, in the form of a giant watchtower, outfitted with a Medieval-era guard.

The next step for The Boring Company is to develop its next-generation boring machine, the Line Storm (reference to a Robert Frost poem) and eventually Prufrock, which will deliver a 15-fold cost savings to current technologies, said Musk, who noted that 15 percent of overall tunnel cost is dirt removal.

This cheaper tunnel is possible, Musk says, through several small yet notable innovations. Costs are reduced by tripling the boring speed and keeping the tunnels to a smaller diameter. But the real key is the ability of the machine to simultaneously mine and install the reinforcement segments, something the next-generation Line Storm will be able to do.

And that’s just the beginning.