It’s not often you can put nuclear weapons, terrorism and climate change on the same list as quantum computing, artificial intelligence and the Internet of Things, but the U.S. government believes all pose an “emerging threat” to its national security.

Several key agencies in the U.S. intelligence community were asked what they saw as long-term threats faced by the country in the next decade and beyond, and the future of “dual-use technologies” took center stage.

Agnostic technologies like encryption, autonomous and unmanned systems, AI and quantum computing rank at the top of the agencies’ “worry list” for fears that they could be used to cause harm, rather than advance society. While all can be used for good — to secure data, to survey a dangerous area or simply to save time and effort — the government says that all can have disastrous effects if used by an adversary.

For example, the government says that, “adversaries could gain increased access to AI through affordable designs used in the commercial industry, and could apply AI to areas such as weapons and technology,” and that “quantum communications could enable adversaries to develop secure communications that U.S. personnel would not be able to intercept or decrypt.”

The list of emerging threats also includes information operations — such as those purportedly carried out by adversarial nation states in the run up to recent elections — may engage in “advanced information operations campaigns that use social media, artificial intelligence, and data analytics to undermine the United States and its allies.” 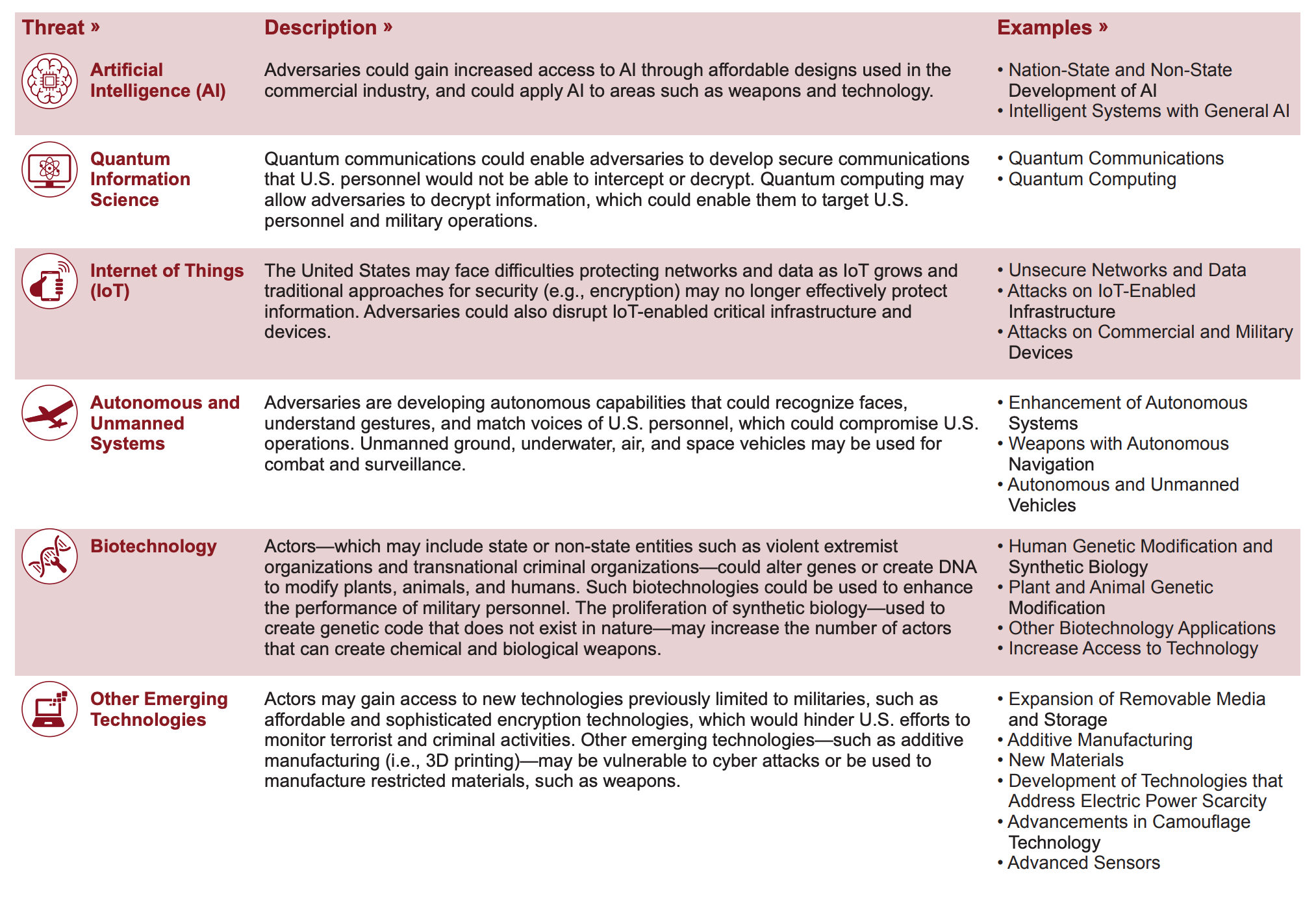 It’s no surprise that the government fears the unknown: warfare in this day and age has adapted beyond recognition, with nation states targeting one another with literal “cyber-bombs” and disinformation campaigns, sowing seeds of doubt rather than lobbing bombs over borders.

“As such, the nature of warfare has evolved to include ‘gray zone’ conflict — defined as the area between war and peace — where weaker adversaries have learned how to seize territory and advance their agendas in ways not recognized as ‘war’ by Western democracies,” the government watchdog wrote. Notably, the U.S. pointed its finger specifically at China and Russia — with Iran a close third — for “pursuing gray zone strategies to achieve their objectives without resorting to military conflict.”

And the U.S. knows it has to keep up with the range of threats, or face weakening on the world stage.

“The challenge for the United States and its allies will be to develop responses faster than adversaries through a better understanding of the strategic environment,” the government said. That might be tougher than it seems, given that senior government officials said the U.S. has been “strategically surprised” by how fast the threats have evolved.

“The nature of conflict has changed, and so the United States must evolve,” the government said.